How to Change Keys in a Song

One of the simplest ways to add interest to your songwriting is through key changes. Also called ‘modulation,’ knowing when and  how to change keys in a song is a great skill to have.

Modulation should not be confused with ‘transposing’ keys. When we transpose something, we’re taking a whole piece of music and moving it up or down in pitch — most often to accommodate a singer’s range. A key change alters the tonal center mid-song.

How to Change Keys in 4 Easy Ways

Key changes can move any way the songwriter wants them. Music is fun, it’s experimental, and artists are able to do whatever they’d like. This means a modulation could be really drastic and almost jarring to the listener, or it could be a more subtle shift acting as a transition.

There are several simple guidelines to implementing tonal center shifts in your songwriting.

Modulate to a Closely Related Key

Some of the easiest or most natural changes occur when moving between keys who share the same notes. This would be between the major key and its relative minor, or vice versa.

In these instances, all you’re changing is the tonal center. If you have a song that begins in Eb major and you move to C minor at the bridge, you’ve just modulated. Eb major and C minor share all of the same notes, but now C is your tonal center instead of Eb.

Another example is E minor and G major. Both of these keys share the same notes, so you could begin a song in E minor and hypothetically modulate to G major for the chorus — a total mood change that might sound really cool!

A direct modulation is what happens when a chord in the previous key is followed directly by a chord in the new key. There’s no transition, just a direct jump from one key to the next. Therefore, this would be the most straightforward way of changing keys, though it can be a bit jarring.

This is very common technique in pop music that uses the direct modulation approach. Moving up a whole or a half-step towards the end of a song creates a cool build-up to a climactic ending. This would look something like changing key from C major to C# or D major.

Using the Circle of Fifths to Change Keys 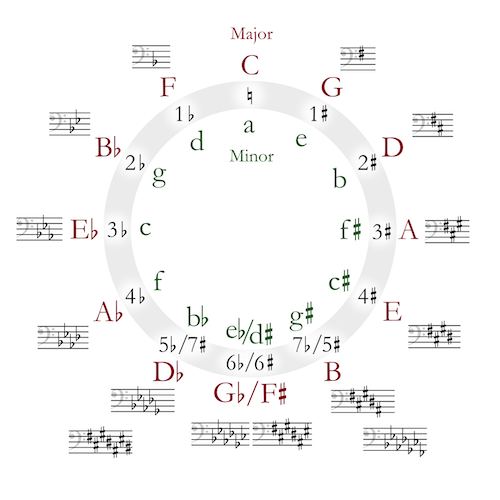 The circle of fifths is useful in so many different ways. One is that it can be used to modulate to a related key.

Depending on the tonic, you can move clockwise or counter-clockwise one step to change keys. For example, in G major you could modulate to D major, which introduces one new note not present in G — C#.

Lots of depictions of the circle of fifths show minor key relationships as well. You can change keys from D minor to G minor by simply introducing one additional flat note to the scale — Eb.

If you don’t have the knowledge memorized, keeping a copy of the circle of fifths handy can be really useful to reference what sort of key changes make the most sense.

A pivot-chord modulation uses at least one chord that is native to both the old key and the new key. It’s one of the most common types of modulation, and generally sounds a bit smoother than a direct modulation since the chord is shared by both keys.

Modulating to a Parallel Minor

The main difference between the major and parallel minor is that the primary chords — I, IV, V — are major in the major key and minor in the minor key. Think about how your chord progression might sound if you changed either the IV or the V to a minor chord instead of a major. Definitely something to play with!