Augustana’s “Sweet and Low”: Inside the Song with Warren Huart

Augustana is a rock band perhaps best known for the song “Boston” off their debut album, All the Stars and Boulevards. They also had a tremendous hit with “Sweet and Low” from their follow-up record Can’t Love, Can’t Hurt, which Warren co-produced and engineered!

Augustana got their start in Illinois around 2002 when singer, pianist, and guitar player Dan Layus got his friends Josiah Rosen (guitars, vocals), Kyle Baker, and Simeon Lohrmann to make music together. Early on in the process, the group decided to re-record one of Layus’s songs he had written in high school about his girlfriend at the time. Things came together rather quickly after that, and the band would release their first album the following year.

Technically their first full-length release, Midwest Skies and Sleepless Mondays debuted in spring 2003, but only 1000 copies were made. The overall reception was positive, though, and Augustana started generating a buzz with the project.

After the first project came out, Layus moved back to California from Illinois with guitarist/vocalist Josiah Rosen, where they found their drummer, Justin South. Augustana went on to release 4 albums for Epic Records and Razor & Tie, in addition to their first independent release and 2 EPs. 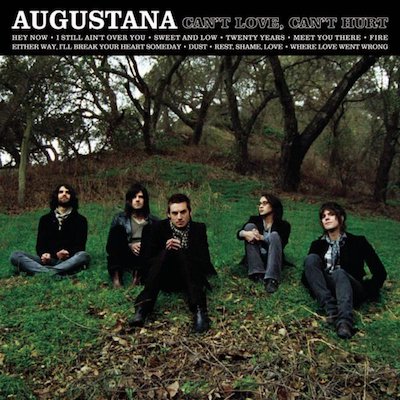 Prior to recording, the band spent the better part 3 months in pre-production with Warren and producer Mike Flynn. Warren had learned from Rick Rubin and The Red Hot Chili Peppers on Californication that pre-production is a huge part of the process—by the time the band gets to the studio, the songs are already locked in.

On pre-production with Augustana, one of the biggest improvements made to the material was bringing the keys down for Layus to sing in a deeper, richer register. The songs were also simplified to remove any fluff, like unnecessary chord changes, in order to not complicate the music for the sake of it.

The band hired Brian MacLeod (Sheryl Crow, Stevie Nicks, Roger Waters) to be the drum consultant on the album.

This move proved to be one of the best decisions they could have made as part of pre-pro. Not only is MacLeod an insanely talented drummer who’s made records and toured with hundreds of amazing artists, but he could talk to Justin South drummer-to-drummer and communicate Warren and Mike Flynn’s ideas in a respectful and easy way.

Hiring MacLeod to focus on drums with South meant that they could work in tandem with Warren, Mike Flynn, and Dan Layus. The latter would work on solidifying tempos, keys, and song arrangements, cut a rough mix to a click track, and pass it along to MacLeod and South to work out the drum parts together.

Can’t Love, Can’t Hurt was recorded at The Pass Studios in Los Angeles.

Augustana spent only about 2-3 weeks in the studio to cut the entire album. This is relatively fast in major label terms, all due to the fact that everyone had put in so much work on pre-production. Demos, song re-workings, etc. were all handled prior to ever getting into the studio!

Warren and Augustana recorded the album exactly as they wanted to hear it.

They wanted to make an album that sounded like a band playing together, which informed the whole process. Many of the tracks on Can’t Love, Can’t Hurt are actually that—the band playing together live, with only occasional overdubs to fix a bass note here or there, add a guitar part, or other little details like that.

The key to recording is to have an idea of what you want to hear and literally record it that way!