Massive. Punchy. Hard-hitting and larger-than-life. These are all words we use to describe the sounds we want out of our drums! But how do we go about getting that modern mix sound…? Drum compression is one of the key ways to emphasize pieces of the kit and also glue everything together, turning the separate parts into a cohesive, huge instrument.

Compressing the Kick and Snare

One of the questions you’re probably asking yourself is “How much drum compression is enough?” This depends on the sound of the kit itself as well as the skill of the person playing them. A really good drummer can hit with nearly the same intensity each time, meaning there’s less dynamic range to compensate for.

With a fantastic drummer, kick and snare will still benefit from a little bit of compression. Even just a dB or 2 of gain reduction at a 2:1 ratio can sound incredible. Keep in mind that a ratio of 2:1 retains the most punch because it acts on transients less.

With such minimal compression going on, the actual setup of the compressor is less crucial. At 1-2 dB of gain reduction, attack and release aren’t nearly as important as they are with heavier compression.

When you need the kick and snare to be aggressive and cut through, more compression does the trick.

Somewhere in the range of 3-6 dB of gain reduction is a good place to aim. Now, the rest of the settings are vital since you’re imparting much more of the compressor’s sound on the drums.

For heavier drum compression, the attack time is one of the most important parameters. It will ultimately determine how much “punch” you’re going to get out of them, which roughly translates to how hard they hit and how exciting they sound.

Drums have a lot of really fast transients in the kick and snare. If you set the attack time too fast, you’ll end up squashing these and sucking the life right out of them. That’s the opposite of punch!

Instead, you’ll want to opt for a medium-slow attack to retain the fastest transients on certain parts of the kit. The key is to experiment with attack and even ratio to highlight transients rather than pushing them down. Sometimes increasing the ratio adds that aggression and punch you’re after.

There are two basic means of going about setting the release time on kick and snare. The first is to set it super fast, which adds density to the drums by bringing up the low-level details like hit decays.

The second is to tempo sync the release to the pulse of the song. When you get the meter on the compressor pumping with the beat of the song, you’ll know you have it synced. This method emphasizes the groove of the song—depending on the material, this can be an incredibly effective approach.

Especially on kick, you can set the release time so it just starts to die when the next kick beat comes in. Overall, you can apply the same general approach as kick and snare on the rest of kit too! 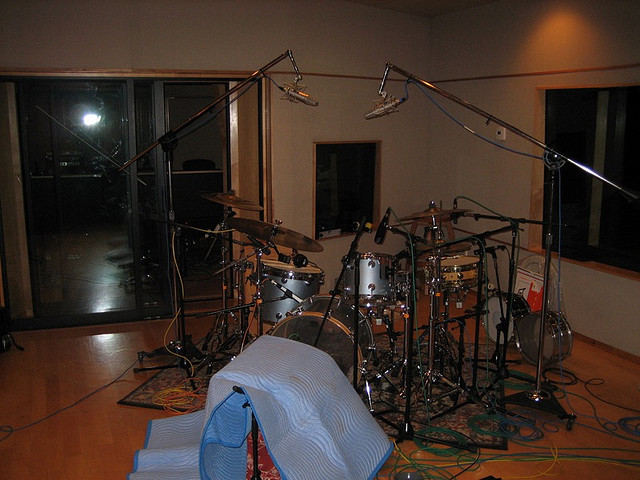 Your overheads and room mics are meant to add the glue to your drum sound. You can get really heavy-handed with the compression since they should be creating cohesion amongst all the different drum mics.

Anywhere from 6-10 dB is a good starting point, and lots of mixers like to really crush room mics with well upwards of 10 dB of gain reduction.

The only problem with using more drum compression is that the ambience of the room will get louder and louder. A slow attack and release works really well, but only if the room you recorded in sounds great. Unfortunately, not all of us track drums in the best studios in the world…

If the room ambience sounds bad, set a faster attack and release. The attack will cut off the transient in the room mics, and the release will make sure the room sound isn’t emphasized. Then you can tuck the room mics underneath the rest of the drum kit without adding too much bad room tone. 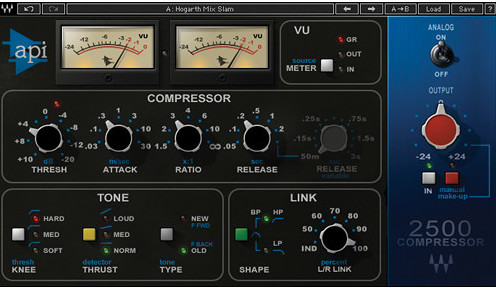 A good sort of rule-of-thumb for compressing any instrument is to use something like 2-3 different compressors all doing maybe 1-2 dB of gain reduction, rather than slamming one compressor super hard. The idea is that you’re getting the gain reduction and dynamic control you want without getting that over-compressed sound.

Drums are slightly different because of what we’ve already discussed about slamming the room mics or hitting a snare for 6 dB of gain reduction on a single compressor.

Still, you compress in stages by doing individual drum compression on different parts of the kit and finishing it off with a bit of extra compression on the drum bus.

Here a slow attack to let the transients through and a tempo synced release works really well. You can keep the gain reduction light and experiment with the ratio for punchiness. A lot of people really like a mix bus compressor such as an API 2500 or SSL G on their drums!