I am very excited to get to show you the marvellous piece of gear we are going to demo today!

I have been in many mastering studios and mixing studios of some of the finest mastering engineers and mixers in the world and many of them have gear by a company called Elysia. Today, we are going to be showing you the Elysia Nvelope 500 and the Elysia Qube! The Qube has not even been released yet! I do not have any gear by them, but I know they make marvellous gear, so this is something I am very excited about!

We are also lucky enough to have the opportunity to give away one Elysia Nvelope 500 and Qube! The Nvelope 500 is an amazing piece of gear and the Qube hasn’t even been released yet, so make sure to enter for your chance to win!

When purchasing this gear, you can buy the Nvelope independently or you can buy this new unit called the “Qube”. I really like the Qube because it is very small and makes the equipment easily portable. If you have any other piece of 500 series gear from Elysia, it will also fit perfectly into the Qube!

The Elysia 500 Nvelope is a really sophisticated transient designer. According to the description on Elysia’s website, it “is a powerful audio processor capable of making subtle or drastic changes to a sound by providing control over its attack and sustain characteristics.” I have friends who are mastering engineers who use this kind of technology in masters because sometimes things are so unbelievably compressed when they get them that it’s just a blob, and they need to add some dynamics and excitement back into it.

The Nvelope is frequency dependent, so you can get in there and bring out snare drums, or kicks drums, or anything else! 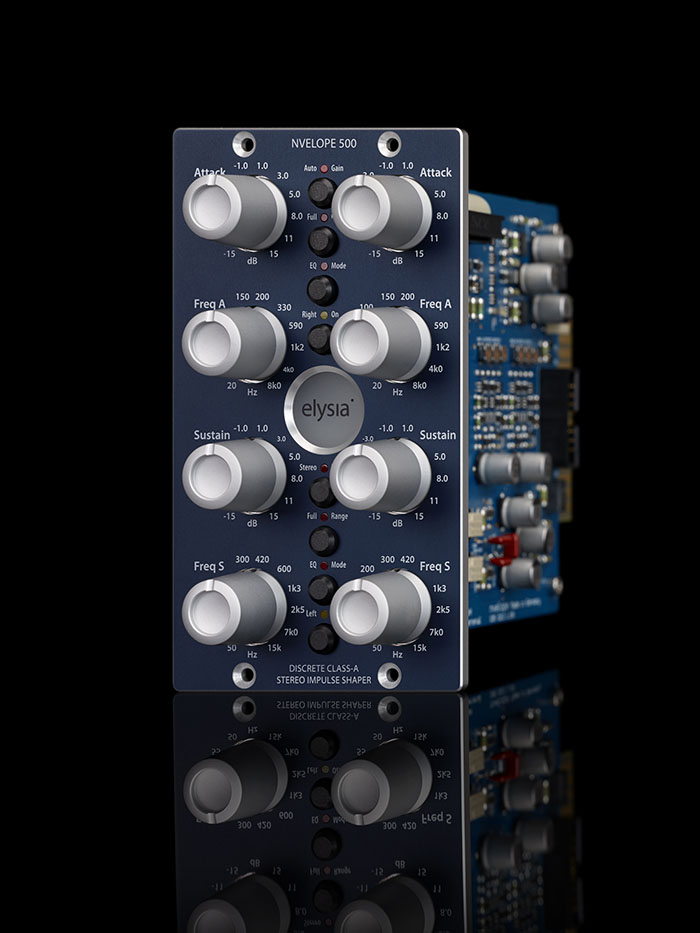 This is a truly versatile unit! You’ve got full range mode where you can look at the attack and sustain, and then you can take it out of full range mode and then it becomes two independent frequencies and I could boost everything as far as attack is concerned, which would be amazing for most mastering engineers and mixers that are given stuff that is already so heavily compressed. But I could also go in there and only sustain frequency in the super lows, or the whole thing if I wanted to. It’s really amazing how many modes you’ve got on just this one piece of gear!

I really loved having the opportunity to play around with this beautiful piece of gear! I would highly recommend it for acoustics, or any time you’ve got a mix and you need to get a little more percussiveness and movement out of it! The Nvelope is the perfect piece of gear for pulling out little piece of energy and create some more edge and dynamics in a track.

Don’t forget: we’re giving away one Elysia Nvelope 500 and Qube! The Nvelope goes for about $1000 on its own, and the Qube hasn’t even been released yet so this is a giveaway you do not want to miss out on! Scroll up to the top to enter!

Click here to learn more about the Elysia Nvelope 500!

Watch the full video below to see the Elysia Nvelope in action!