The first transient designer came out in the late ’90s. It was a whole new concept that left lots of people wondering whether it was a compressor, or a noise gate, or something else entirely. The real answer is the latter, giving users unique control over the envelope of a sound. Flux BitterSweet is an excellent free transient designer plugin filling this niche nicely.

What is a transient designer?

In short, a transient designer gives us control over just the attack and sustain parts of a signal’s envelope. Remember that the envelope includes four parts of the signal, which are attack, decay, sustain, and release (a.k.a., ADSR).

We noted that the first transient designer debuted in 1998. The design was Ruben Tilgner’s of the German pro audio titan Sound Performance Lab. He developed what is known as ‘differential envelope technology,’ with the result being a the first two-channel hardware processor called Transient Designer.

Tilgner’s differential envelope tech (DET, for short) provided additive or subtractive envelope control over the attack and sustain. Precise control over just these elements was pretty revolutionary — existing dynamic processors like compressors or gates effected the entire envelope. By leaving the decay and release alone, transient design allows for a wide range of useful tone shaping from subtle to extreme.

Even with very simple controls, which most plugins have adopted today, SPL’s Transient Designer almost immediately became a studio essential. Engineers found it particularly useful on drums — an instrument with sharp, defined attack transients. It gave them the precise ability to boost or cut the attack and/or sustain of a signal. For example, a transient designer could let you increase the initial transient of a snare, or reduce the sustain of a tom to minimize room sound or bleed.

Of course, transient designers like Flux BitterSweet are versatile and not limited to only drums. Try them anywhere you’d like a bit of precise envelope control. The free plugin Flux BitterSweet would be a great introduction to adding this effect to your mixes. 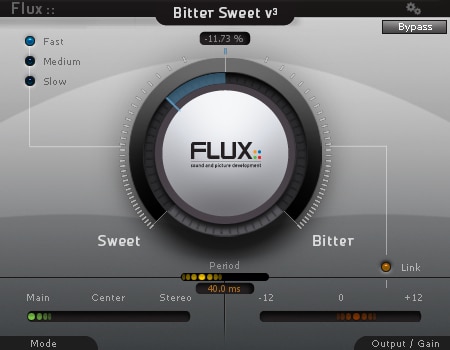 Flux BitterSweet keeps the controls extremely simple. There’s basically a single large knob in the center of the interface with one end called Sweet and the other called Bitter.

Should you use a transient designer?

The real question is ‘why not?’ Experimentation is a such a big part of what we do that it would be a disservice to not at least give it a go!

Even though transient designers like Flux BitterSweet are just another dynamic processing tool, they’re a great way to further ‘mess up’ a sound and make it your own. No-nonsense plugins like these are easy to dismiss, as they almost seem too simple — but playing with a signal’s envelope can completely change the way it sounds!