Antares Audio Technologies introduced their proprietary Auto-Tune software in 1997. The purpose was to correct off-key pitches in real-time for perfectly tuned vocals or instruments. Autotune is a colloquial term now, frequently understood by artists as a catch-all for heavily processed modern vocals. For beginning users, we’ll take a look at some popular options for a free autotune plugin.

From its very introduction, engineers and producers started experimenting with the technology. The 1998 song “Believe” by Cher gets the credit for showcasing the “0 retune speed” robotic effect. At a super short retune speed, the pitch correction becomes unnatural sounding, but it’s a desired effect which has inspired a whole style of vocal production and become a hallmark of modern genres like trap.

After Cher in the late 2000s, T-Pain popularized the effect even further, with other prominent artists like Lil Wayne and Kanye West catching on. Today, the autotune sound is all over the place in modern rap. Travis Scott, Future, Playboi Carti, and many use it as the main effect to shape their vocals.

If you want the most authentic autotune sound, it’s a good idea to stick with Antares. That being said, it’s an expensive plugin, especially if you’re just starting out or just want to experiment with its sound a little bit. Luckily there are some decent free alternatives for real-time pitch correction out there. 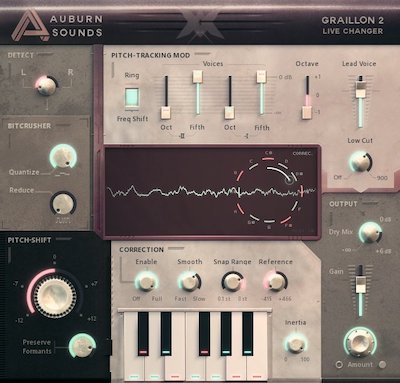 Graillon is the most popular free autotune plugin. The full, paid version obviously has more features, but the ‘freemium’ Graillon 2 provides pitch shifting and correction—the two most important elements of autotune.

All you have to do is load the plugin and turn on the Enable Correction knob. From there, you can use the Smooth function to control the retune speed (which controls how fast the pitch corrects itself; faster settings = robotic voice). Plus, you can use the integrated keyboard to lock autotune into a scale for more accurate pitch correction. 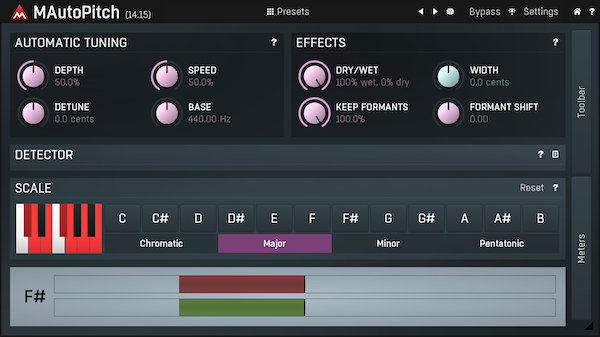 MAutoPitch is another great free autotune plugin with options like depth, detune, and speed, which are standard on most pitch correction software.

Depth controls how much effect the VST has on the sound, sort of like a wet/dry knob. Detune pushes the pitch of the sound up or down by cents for fine-tuning pitch. The speed knob controls how fast MAutoPitch responds to out-of-tune notes; again, this is the same a retune speed on the Antares plugin. 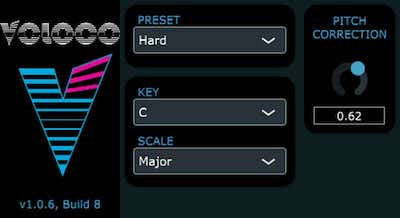 Voloco by Resonant Cavity is one of the best free autotune plugins for creative effects. Its presets include 8-bit and Daft Punk-style vocals, plus many others that will add a unique and artificial timbre to your productions.

Unlike some the other freebies on the list, Voloco adds more than just pitch correction to the signal. For example, the Daft Punk and 8-bit modes add LFO volume modulation and gate-like effects to your vocals. Voloco is designed specifically for the over-the-top Cher/T-Pain sound; it’s a creative tool more than a fine pitch corrector.

Other Voloco features include locking to a major/minor scale and and a sort of wet/dry control to change the amount of effected signal. 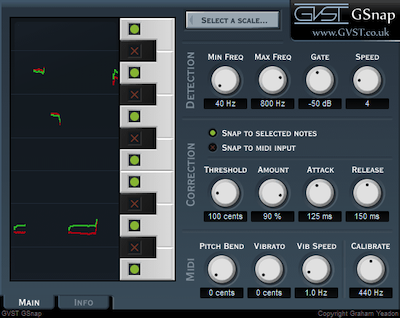 GSnap was the first free autotune plugin available. In addition to standard autotune-like effects, this plugin has the unique ability to snap pitch to any MIDI signal being fed to it. For example, you can send a MIDI synth line to GSnap on your vocals, and it will automatically ‘tune’ the vocals to the synth.

Where it lacks in certain features like formant adjustment, GSnap instead incorporates vibrato settings. It’s a great free autotune plugin that’s easy-to-use and does what it says it will. It’s a perfect balance between standard real-time pitch correction and creative autotune effects. 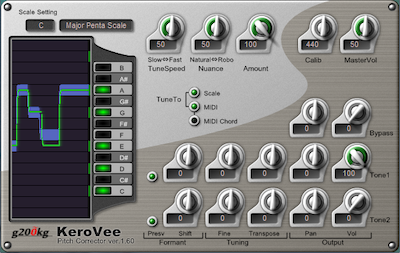 Japanese developers g200kg came out with KeroVee in 2010. What KeroVee lacks in robotic effects, it makes up for with precise pitch adjustment that’s way more detailed than most free autotune plugins. Also, similar to GSnap, you can route MIDI notes to KeroVee for the plugin to use as a pitch reference.

Unique to KeroVee is a ‘Nuance’ parameter that allows you to keep or ignore subtle pitch changes, such as natural vibrato from the singer. And of course, you get a ‘TuneSpeed’ knob which controls how fast the plugin will correct the incoming signal.

If you’re looking for a free autotune plugin specifically for fine tuning vocals, rather than creating a robotic and noticeable effect, KeroVee is a great place to start. 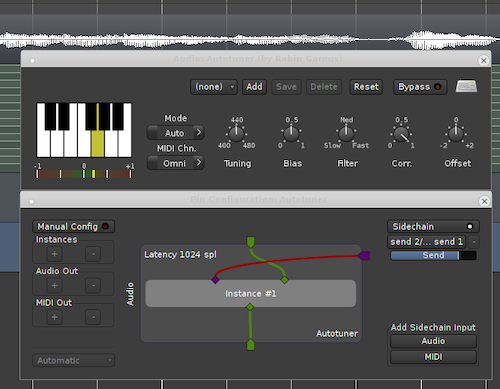 TrapTune by UnitedPlugins is a roust modern vocal production plugin including real-time pitch correction, reverb, delay, doubling, and distortion. It’s a one-stop-shop for trap vocals that skyrocketed to popularity several years ago and have become the go-to sound for many artists in the genre. The free edition unlocks automatically after you download the full version (once the 15-day trial expires). You lose some controls that the paid version has, but it’s still a powerful and fun tool for vocals.

x42 Auto Tune is a basic real-time pitch corrector. It’s designed to work on vocals that are just slightly out of tune, so it’s best used to make minor adjustments rather than full-on robotic effects. Some users may find that limited in scope, which it objectively is; keep in mind, though, it’s a free pitch correction tool, and it doesn’t get much better than free! 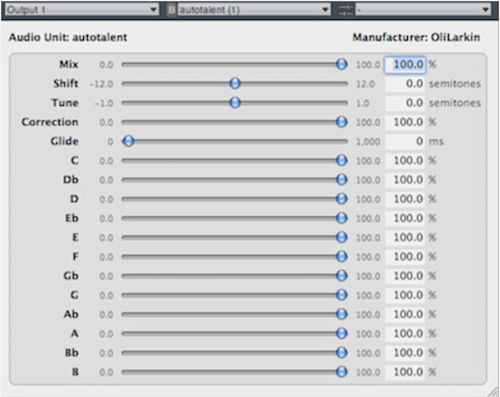 Snarky name aside, Autotalent is a reasonably capable real-time pitch corrector. Credit to Tom Baran for the original algorithm and LADSPA plugin for Linux. The link here is to a VST/AU port of the plugin to make it accessible to Windows and Mac users.

Last but not least is Logic Pro X’s Pitch Correction plugin. Technically free in the sense that it’s a stock Logic plugin, users will obviously need Logic to use it — and it’s Mac exclusive. Still, this is a truly powerful stock pitch corrector that rivals paid software.

While it’s hard to beat Antares Tech’s proprietary Auto-Tune, there are a handful of great free autotune VSTs for beginning users. The ‘real thing’ will likely always reign, especially for professional use, but access to incredible freeware is one of the many advantages we have as engineers and producers today!