Stereo miking techniques use two microphones at the same time to record one sound source. Each microphone is then panned to the left and to the right to mimic the way our ears perceive sound in the “real world.” This adds width, space, and location to a recording.

Stereo miking more closely replicates what we hear with our own ears because it creates positioning in the left and right channels, and adds ambience to the recorded signal. Versus a single microphone in a typical mono set-up, stereo miking techniques provide the listener “images” in regards to the location of an instrument(s) in the recording. What comes through the left channel is heard there, and what comes through the right is perceived on the right.

Stereo miking relies on the fundamentals of sound localization — or, the science behind how we perceive sound. Interaural Timing Differences (ITD) mean we perceive sounds physically closer to our left ear slightly before they reach our right ear and vice versa. Interaural Intensity Differences (IID) mean a sound source located on one side of the head appears louder to the ear nearest the source.

The way our brain analyzes and locates sound forms the basis for stereo miking techniques.

The most basic technique is the spaced pair, or A/B. This one takes two of the same microphones (usually omnidirectional or cardioid) pointed at the sound source about 3 to 10 feet apart. Their capsules should be in the same plane. In your DAW, you’d pan the left and right microphones accordingly.

A spaced pair creates a wide, almost unnatural stereo image. This is because the microphones are spaced up to several feet apart, whereas our ears are spaced only several inches apart on our heads. The ITD and IID is quite substantial then, and this can be a desirable effect.

Spaced pairs are commonly used to record ensembles, though the sound coming from the middle of the stage sometimes isn’t as defined as what’s coming from the left and right, depending on how far apart the microphones are. 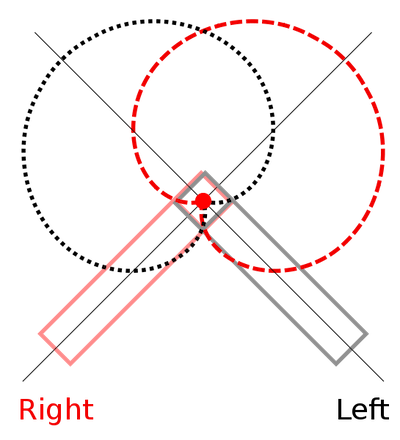 Spaced pairs create some problems with phase cancellation because of the extreme timing differences between what each mic is picking up. The way around this is to use a coincident, or X/Y, pair of cardioid microphones.

Timing differences are minimized by placed each mic capsule in the same physical location. This is achieved by creating a 90° to 135° angle with the capsules — usually one mic on top of the other as close together as possible.

A coincident pair eliminates timing differences, so the stereo image isn’t nearly as wide as with a spaced pair. However, there are still some IIDs which create a tight, focused stereo image. X/Y is one of the most commonly used stereo miking techniques. 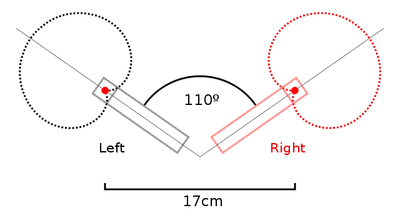 ORTF stands for Office de Radiodiffusion Télévision Française, who invented the technique as an alternative to X/Y — it has the same advantages without the disadvantages.

Rather than placing each capsule right on top of the other as in X/Y, they’re placed end-to-end and pointed outwards at a 110° angle. The capsules should still be in the same horizontal plane, but they are pointed much more widely outward than with a coincident pair.

This is fairly close to the way our ears are positioned on our head. ORTF is one of our stereo miking techniques meant to closely emulate the way we hear, replicating both ITDs and IIDs to create a natural sounding stereo image.

One of the most interesting stereo miking techniques is mid-side, or M/S. With this one, you place a cardioid microphone (mid) in the center and point it at the sound source. This mic picks up the mono sound just like any microphone would. Then, you take a bi-directional mic for the “side” position. You would place it just under the mid mic so it’s facing left and right opposite the center microphone. This one picks up ambience and positional information.

The signals from the mid and side mics have to be routed through a small matrix circuit that combines them in specific ways so that you get a left channel output and a right channel output.