How ONE Recording Mistake Created a Musical Phenomenon in the ’80s

Gated reverb is a technique responsible for the punchy, whip-like drum sounds which dominated popular music throughout the ’80s. Listen to a track like “Kiss” by Prince (1986) and you’ll immediately recognize the sound. It’s bold and quintessentially ‘80s. But what is “gated reverb,” and how was it developed?

When you put a noise gate on a reverb return, the gate’s settings can be adjusted to cut the decay short.

The sound is bright, crisp, punchy, and wet—the antithesis to the very dry drum sounds of the 1970s. As the noise gate closes and “sucks” the reverb’s decay away, you’re left with sharp, reverberated attacks that sit really well in the mix.

So whose idea was it to combine these two processors?

In 1979, engineer Hugh Padgham discovered the technique by accident.

It was while working on Peter Gabriel’s third solo record that the method was born. Without a good deal of happenstance and experimentation, gated reverb’s history would be quite different, had it even been discovered at all!

As the story goes, Gabriel, along with Genesis drummer Phil Collins and engineer Hugh Padgham, were working in Studio 2 at Townhouse, which had a brand new SSL 4000 B console.

The set-up included a talkback microphone in the live room for performers to communicate with the control room, as well as compressors and noise gates on every channel—a first for the era. The talkback mic itself was heavily compressed, designed to pick up even the quietest voices in the furthest corners of the room.

Padgham recalls what happened when he decided to turn talkback on while Collins played:

“The whole thing came through the famous listen mic on the SSL console. The SSL had put this massive compressor on it because the whole idea was to hang one mic in the middle of the studio and hear somebody talking on the other side. And it just so happened that we turned it on one day when Phil [Collins] was playing his drums. And then I had the idea of feeding that back into the console and putting the noise gate on, so when he stopped playing it sucked the big sound of the room into nothing.”

Here’s another account of the same instance, as told by Sound on Sound:

“[Padgham was] setting up a kit for recording, and there just happened to be some sends on the channels being used for the drum mics going to an AMS reverb — and the reverb’s returns just happened to be patched into two channels that just happened to have some noise gates strapped across them! As the drums were being tuned and hit and miked up in the studio, listeners in the control room heard the fabulous sound of the reverb being abruptly cut short by the gates on the returns. Rather than ‘fix’ this, Gabriel exploited it and it became a trademark sound on his third album, particularly on the opening track, ‘Intruder’.”

Compression, gating, and reverb together: a happy accident.

With the compressed, gated signal sent to an AMS reverb unit, the gated reverb technique became just that: a sound that defined a decade’s worth of music. And it wasn’t just Gabriel and Padgham who were so thrilled with their discovery; Phil Collins was equally impressed and inspired to create perhaps the single most recognizable example of gated reverb today.

1981’s “In the Air Tonight” by Phil Collins is one of the most famous examples of a gated reverb drum sound.

Recruiting Padgham a year after working on Gabriel’s album, Collins single-handedly popularized the sound through his own solo work. Making another trip to Townhouse Studios, Collins’s drums were tracked in the “Stone Room,” which is exactly what it sounds like—a room made of stone, designed to sound like the interior of a castle.

The room’s natural decay was cut short by a noise gate, as famously heard on “In the Air Tonight.” I bet you’re thinking of that drum fill this very moment.

Without a “Stone Room,” though, you could still get your reverb from early digital units. Let’s take a closer look at reverb’s history as it relates to the gated reverb sound of the ‘80s.

The Evolution of Reverb

In its earliest (and natural!) form, reverb was created using echo chambers—literally rooms designed to be very “live,” with plenty of natural echo. A loudspeaker would be placed in one part of the room and a microphone in another; the echo of sound coming out of the speaker and reverberating in the room was captured by the microphone.

Studios like Abbey Road in the UK and Capitol Records in Los Angeles are both well known examples of such chambers. The main problem with these, as you can probably guess, is that they require careful design and plenty of real estate to build. Because of these limitations, an alternative in the form of “plate reverb” was developed.

Plate reverb, simply described, consists of a large box in which a large sheet of aluminum is suspended. As sound enters one side of the box, it passes along the aluminum plate, vibrating it, and comes out the other end with a bit of reverb.

Now, again, these boxes were often huge constructions that weighed 600 pounds or more. Certainly far from portable! Luckily, the digital advances of the 1980s made artificial reverb a possibility. Not only were these units portable and convenient, but they had a sonic character all their own. 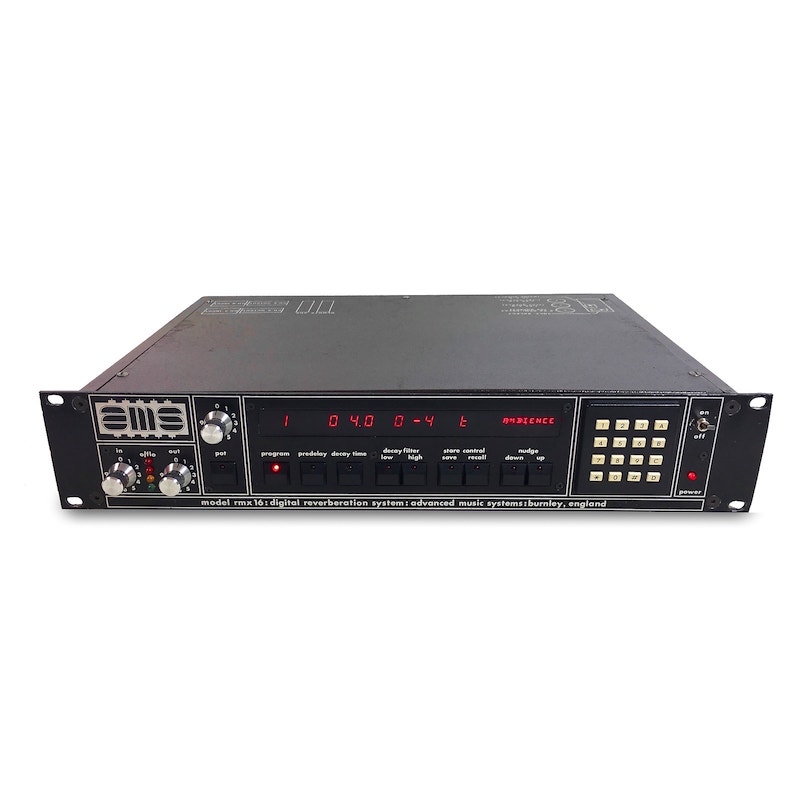 While not the first digital reverb unit, the Advanced Music Systems RMX16 was the first unit to utilize microprocessors. Built by AMS engineer Mark Crabtree in 1981, the RMX16 came loaded with a remarkable 99 presets, including one in particular that proved to work very well for a gated reverb sound.

The RMX16’s “Nonlinear” reverb preset was purposefully designed to sound artificial. In nature, reverberation decays, getting quieter and quieter until it is eventually inaudible. A nonlinear reverb, on the other hand, actually gets louder as it sustains.

The weirdness of the nonlinear reverb preset was perfect for the experimental sounds of the ’80s!

Building off of Hugh Padgham and Phil Collins’s drum sound, Prince took it a step further.

Needless to say, Prince loved the sound of gated reverb. From about 1982 to 1987, the technique was all over his records! He was also a fan of sampled drums, and famously fed a Linn LM-1 drum machine into the RMX16 reverb unit to create the quintessential ’80s drum sound heard on some of his biggest albums.

At this point, gated reverb was no longer an accident at all—it had become the defining sound of an era. Some of the most popular examples of this drum sound can be heard on “Hounds of Love” by Kate Bush, “Jack and Diane” by John Cougar Mellencamp, “Dance on Your Knees” by Hall and Oates, and “A View to Kill” by Duran Duran.

By the time the ’90s rolled around, musicians tended to favor dry sounding drums again.

But there’s a phrase which says “everything that’s old is new again.” Even though gated reverb fell out of favor for quite some time, it’s made a comeback over the last several years on major pop records.

Projects like “When I Needed You” by Carly Rae Jepsen, Melodrama by Lorde, and the appropriately titled 1989 by Taylor Swift all prominently feature the ’80s drum sound which Hugh Padgham and Phil Collins accidentally created back in 1979.

Today, musicians don’t need LM-1 drum machines fed into AMS RMX16 reverb units to achieve the sound of the ’80s. You can simply download drum sample packs inspired by Phil Collins, Prince, and the countless other artists who helped define the sound of an era!