How to Write a Catchy Chorus | Essential Ingredients

There’s a lot of pressure on songwriters when it comes to creating the grand hook. Understanding how to write a chorus that listeners can sing along and identify with is a huge undertaking.

The chorus is the most important part of the song, and though there’s not one way to teach someone how to be creative, there are particular trappings of catchy hooks you can pay attention to in your own writing.

How to write a memorable chorus

Legendary executive and founder of Motown Records, Berry Gordy, famously said, “Don’t bore us, get to the chorus.” That quote pretty much sums up the whole of pop music over the last several decades, and it’s never been more true of modern pop music today.

A good chorus should be what listeners eagerly anticipate. The verses prepare us, but it’s the hook that’s the centerpiece of the song. For many people, it’s what keeps something on repeat for days!

Words and how you say them are the single most important elements of a great chorus. If it sounds like an oversimplification, it’s actually difficult to put those two pieces together.

Classic choruses throughout time tend to be concise, poetic, repetitive, and oftentimes simplistic. Getting people to remember the lyrics and sing along requires a bit of finesse to say something both emotionally powerful and resonant, and easy enough to get stuck in listeners’ heads.

Pick nearly any hook you’ve heard at random and think about how it’s composed; the first chorus from “Let It Be” by The Beatles, for instance:

Looking at just the lyrics, that’s about as basic as it gets. It ticks the boxes as being simple and repetitive, and it makes use of the poetic device alliteration in the second line (“Whisper words of wisdom”).

The melody is equally simple as it navigates the C major scale, making use of alternating descending and ascending pitches without any massive intervalic leaps.

The two primary elements you’ll need to get comfortable with when learning how to write a catchy chorus are lyrics and melody. Listeners identify with the words first. But it’s the melody that contributes the emotional content and ear worm catchiness that people can hum without the lyrics. 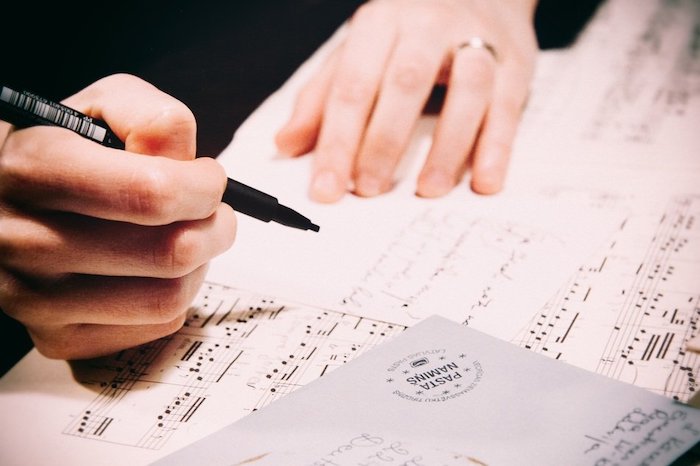 The word ‘hook’ is sometimes used interchangeably with ‘chorus,’ but it can also refer to specific parts of a chorus. Hooks can be found in the instrumentation/production, or in the lyrics or melody. The hook is that ear worm device we mentioned earlier; something that plants itself in people’s heads and ultimately makes an incredible chorus what it is.

A hook can be of course be lyrical (repetition is hooky, and so is simplicity), but it can also be melodic or rhythmic either vocally or instrumentally. Two elements working in tandem, such as a vocal and instrument playing in unison over the chorus, can be a hook as well.

Rhythm is part of the production. You should consider changing the rhythm from the verse to the chorus to differentiate the two. It also helps the chorus stand out as the focus of the song. One way to do that is to keep the rhythm basic throughout the verses, and then shift to something a bit more lively and dynamic in the chorus. That’s just one thought, but there are countless ways to distinguish the verse’s rhythm from the chorus’s.

A popular rhythm change in pop music is going from a standard beat to a four-on-the-floor chorus that gets people’s bodies moving.

Part of the production as well as the mix, dynamic impact plays a major role in writing a chorus. The most common way we like to do it is have a somewhat subdued, maybe sparsely arranged verse that leads into a massive chorus with new instruments, a noticeable volume and density increase, background harmonies panned all around, etc.

You can also work a build-up transition into the arrangement to signal that the moment everyone’s been waiting for is on its way.

Conclusion: How to Write a Chorus for a Song

Whether it’s how to write a rap chorus or a folk chorus, the principles are the same. It won’t be easy, but familiarizing yourself with the fundamental aspects of all your favorite hooks can help you “borrow” inspiration for your own songs!