KEF has been an innovative force in speaker development for six decades. The company’s renowned hi-fi creations continually ‘wow’ audiophiles with their meticulous design and superb sound quality. In this KEF LS50 review, we’ll be looking at the 2012 50th anniversary speaker, as well as the new and improved LS50 Meta utilizing exclusive KEF technology!

Raymond Cooke founded KEF in 1961. The first building was located on the grounds of Kent Engineering & Foundry, from which the company got its name. At the time, Cooke was an ex-BBC electrical engineer with a vision; he wanted to create loudspeakers that could reproduce sound as naturally and accurately as the original performance. His inventive spirit led KEF to becoming one of the industry’s greatest innovators, from the company’s inception in 1961, to Cooke’s death in 1995, and continuously through the present and beyond.

Cooke’s designs used non-traditional materials early on, such as Mylar diaphragm tweeters. This sort of trailblazing inspired many new products for KEF. Notably, the first compact two-way hi-fi speaker—the Celeste—which solidified KEF’s commercial viability from the beginning. The success of the Celeste speakers spurred the Portable Celeste for installations in schools and other institutions. Today, KEF’s product line still includes many types of specialty in-wall speakers.

Cooke maintained a professional relationship with the BBC manufacturing speakers for them while continuing to develop and refine KEF drivers for the utmost quality. Widely considered KEF’s most outstanding achievement, the BBC created the LS3/5 broadcast monitor using KEF drive units. The loudspeaker found its way into portable monitoring systems, such as in broadcast vans. In 1975, the design was refined into the LS3/5A: a revolutionary unit which set the ‘BBC standard for loudspeakers.’

Today, the LS50 is a modern interpretation of the legendary LS3/5A, beloved for its stunning accuracy.

The KEF LS50 is a bookshelf hi-fi speaker featuring a uniquely designed 5.25-inch driver with a 1-inch tweeter fitted snuggly in the center. What makes the driver so special is its omni-directionality, able to radiate sound accurately throughout a room regardless of the listener’s position. This is KEF’s trademarked Uni-Q driver/tweeter design, complete with a specialized waveguide to improve overall performance.

For a small speaker, the LS50’s bass response is bold and punchy, but not at all overdone. You won’t find any sub, but down to around 60 Hz there’s plenty of thumping precision. Moving up through the spectrum, the LS50’s are incredibly transparent—even unflatteringly so in the case of poorly mixed music. They’re extremely crisp, and vocal performances particularly pop out as if the singer is right there in the room with you.

The KEF LS50 hi-fi speakers are extremely nice. Released in 2012 to celebrate the company’s 50th anniversary, they still sound impeccable; anything you put through them will either be remarkable, or it will be obvious whether the mixer has done a subpar job. At release, these speakers ran between $1200 and $1500 a pair. Today you can find them on the secondhand market at around half the price.

With premium hi-fi units like these, you’ll need to make sure your amp is up to the challenge as well. Don’t bother with the KEF LS50’s if you’re running a budget amplifier, as these will only shine when adequately paired.

The KEF LS50 Metas are 2020’s improvement over the original LS50s introduced in 2012. In many ways, the award-winning speakers are no different from the 2012 version—except for one major improvement that took a great speaker and made it even better.

The LS50 Meta speaker partially redesigned the Uni-Q driver array, adding what KEF calls Metamaterial Absorption Technology. MAT physically resembles a maze, and the complex structure is able to absorb nearly all of the sound from the back of the driver. The result is a distortionless, crystal clear sound that’s somehow even better than the first iteration LS50s.

In this KEF LS50 review, we can positively say the Metas are a drastic improvement. It’s abundantly clear from first listen that the MAT technology actually works. The clarity coming out of these speakers is unparalleled; it’s so rich and sophisticated that the 2012 LS50s seem almost muddy by comparison. Overall, the Metas do a remarkably convincing job of conveying all the nuances of recorded music in ways the old ones just can’t. 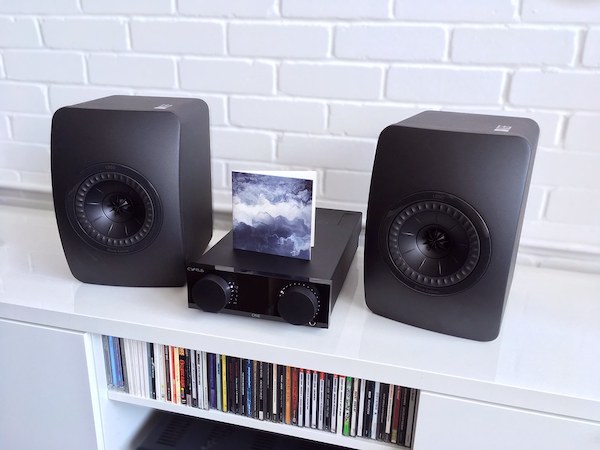 The KEF LS50 is a tremendous hi-fi speaker. In our take, the newest Meta variation improves upon the original design in the most perfect ways imaginable. However, being that it’s a brand new product, a pair will set you back $1500. You wouldn’t be remiss to pick up a used pair of the first LS50s, especially if you’re just getting into audiophile grade bookshelf speakers for the first time. You’d surely still be impressed by one of the finest hi-fi speakers out there.