LED lights that sync with music are the recording industry’s best-kept secret behind multi-platinum hits. Okay, that isn’t true, but colorful lighting is definitely a great way to step up your studio’s aesthetics. And when you’re working late into the night, you probably don’t want bright lights beating down on you.

The Benefits of Syncing LED Lights in Your Studio

I have to fight the urge to make the same corny joke over and over about how RGB lighting makes stuff sound better. Obviously there aren’t many tangible benefits to having cool lights in your studio, apart from possibly creating a more inspiring environment. That’s an important intangible, though, one that’s hard to quantify, and it all boils down to your personality and taste.

Some folks love smart lighting they can adjust on a whim, and others are less fussed about the room’s—oh god, here it comes—”vibe.” Or if your studio doubles as a set for visual content creation as well, then it might be a good idea to have a space that looks good on camera. LED lights are clearly an easy way to improve a studio’s look.

In this case we’re talking about LED lights that sync with music. These are just lights and lightstrips with a built-in microphone that detects sound and “moves” to the beat.

How to Sync LED Lights to Music

Smart lighting is usually controllable through an app over Wi-Fi or with a remote. If the lights have a dedicated music mode, enable that, and whenever the lights are on and music is bumping, they’ll dance to the music.

There’s really no fancy trick to syncing lights to music. It’s a standard feature on many smart lighting solutions. When in doubt, consult the dreaded manual.

8 Best LED Lights That Sync with Music for Your Studio

Without further ado, the reason you clicked on this article! 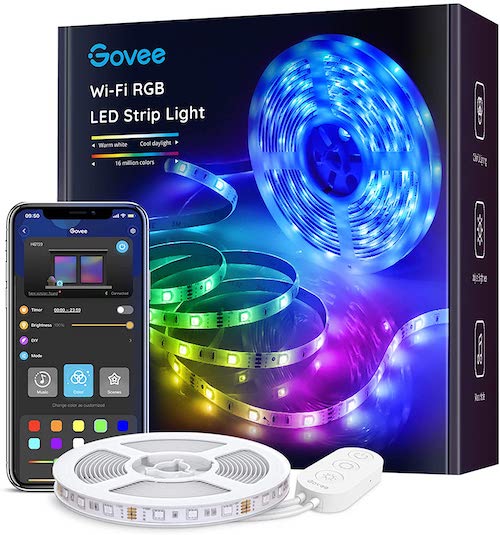 The Govee stuff is a total bargain for RGB goodness. You can get 16 feet of light strip for just over 20 bucks, complete with Wi-Fi app control and, of course, music sync. It also works with Alexa and Google Assistant, so if you’re on the smart home kick, you can  easily integrate your lights into that, too.

If you want a slightly simpler set-up, NEXillumi is great. This basic LED light strip has a remote control for operation and a built-in microphone to pick up sound in the room. It’s very affordable, performs as intended, and spices up any home studio with colorful ambience.

Dreamcolor’s spin on the LED light strip is pretty cool. You can control it via app or remote, and its “Chase Mode” lets you choose from a variety of dynamic lighting settings. Music mode is standard, and it connects to any standard USB charger for power. 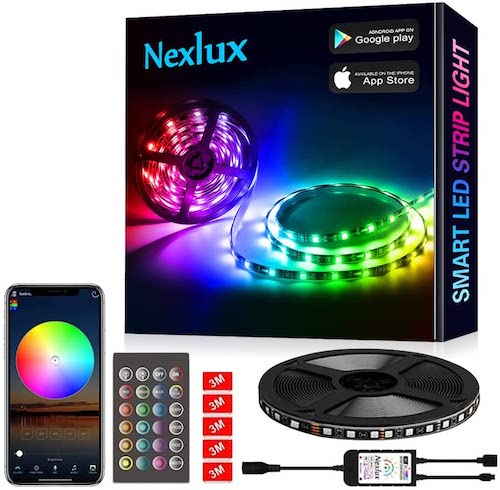 Nexlux offers another great LED light strip that syncs with music for your home studio. We’re starting to get familiar with standard features—app or remote control, easy installation, built-in detection mic, etc. All at a price that’s absolutely worth a try, at the least.

Here we have a light strip that’s actually modular in a sense. You can cut it on the designated lines and reattach the pieces with a connector. Light strips are already quite flexible for any space, but that’s a neat feature if you wanna put a little DIY touch on your studio lights.

TBI Pro’s strip is just as straightforward as the rest on the list. Cost is an important factor, and this one’s a dollar a foot—not too shabby. You can change settings through your phone or with the included remote, and it seamlessly sync with music so your home studio is always rockin’.

BIHRTC LEDs come with four different music modes to jam along to the rhythm. The internal microphone is sensitive enough to respond at modest levels. 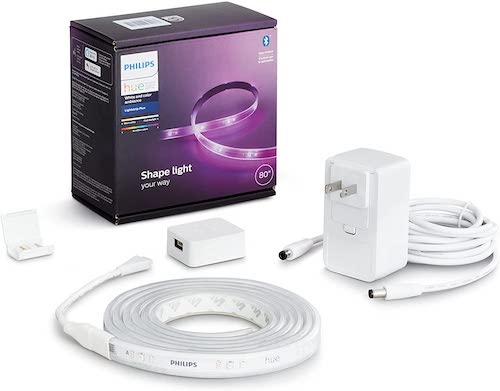 Hue is the most popular high-end smart lighting system. To make the most of it, you’ll need to get a dedicated hub which connects to Wi-Fi and identifies all of the Hue components in your arrangement. It’s all app-based, from which you can access sync settings to pair up with your studio’s music. Other light strips on the list are more affordable, but if you want to expand your lighting, maybe even throughout your entire home, Hue is the way to go.