Hugh Padgham is one of the world’s top producers, on par music industry legends like Phil Spector, George Martin, Quincy Jones, Phil Ramone, Brian Eno, and Rick Rubin, to name but a few. The reason why Padgham enjoys, perhaps, not quite the same name recognition is because he prefers to remain behind the scenes, or, in his case, the desk. He likes to call himself “an invisible catalyst,” someone who gets the best out of the artists he works with, without taking any of the limelight.

Over the course of a career spanning five decades, Padgham has been the “invisible catalyst” behind dozens of best-selling, multi-platinum albums, many of them genuinely ground-breaking. Among them are recordings by XTC, Peter Gabriel, The Police, Yes, Phil Collins, Genesis, Kate Bush, David Bowie, Howard Jones, Paul McCartney, Sting, Roger Waters, Suzanne Vega, Sheryl Crow, The Bee Gees, Peter Frampton, McFly, and many more. Altogether it earned him four Grammy Awards.

Most of the above-mentioned credits are British, and there is indeed something quintessentially British about Padgham as a person, his engineering and production approach, as well as the musical directions he tends to works with. Padgham’s most important and innovative musical achievements came into being during 1978-1985, a period that has been critically underrated, as it was sandwiched between more attention-grabbing genres like prog rock, punk and AOR in the 1970s and (synth)pop, hip-hop, alternative rock, and heavy metal in the 1980s.

While the late seventies did see the rise of the much-lauded New Wave movement in the US, in the UK completely different yet equally epoch-making developments were afoot, resulting in a wave of pioneering albums that introduced not only new musical developments, but that also were the first with a truly modern sound. The reason for the latter was that, in contrast to the US, the British innovations were to a large degree inspired by new developments in studio and music technology. 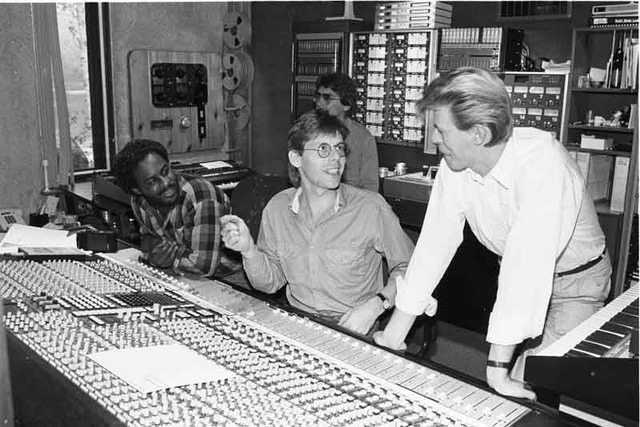 When Padgham started working in the recording industry in the late seventies, he was lucky to find himself in the middle of both musical and technological revolutions. Born in 1955, just north-west of London, he came through the ranks in traditional fashion, working his way up from the bottom, in a range of London studios. He started as a tape op in Advision Studios, and then Lansdowne Studios, where he ended up a fully-fledged engineer. In 1978, he moved to The Townhouse, a legendary studio in West-London, where he recorded and produced several albums that changed the course of music.

Most famous amongst these were Peter Gabriel’s third album, often nicknamed Melt, recorded in 1979 and released in 1980, and Phil Collins’ debut solo album, Face Value, recorded in 1980 and released in 1981. Gabriel’s album contained the song “Intruder,” and Collins’ the song “In the Air Tonight.” Both tracks became famous for their use of the now almost mythological “gated reverb” drum sound.

The big, gated reverb drum sound entrance at 3:41 of “In The Air Tonite” is one of the most dramatic and talked-about moments in popular music. This once again proved to be the case in 2020, when young twins Tim and Fred Williams did a First Time Hearing of the song on their TwinsthenewTrend YouTube channel. Their surprised reaction to the drum entrance went viral, alerted a completely new generation to the song, and pushed it up the charts once again.

The “gated reverb” sound was to some degree the result of a happy accident. However, because the young Padgham was dealing with newly emerging digital technology, for example the Fairlight, and various samplers and drum machines, new digital outboard effects, and digital tape machines, many of the albums he worked on during this period broke new ground in a more deliberate way. Padgham often was at pains to explain that he combined these new technologies with an old-style approach—trying to get everything to sound right when tracking, with a minimum of EQ and compression—to get a sound that was truly modern, transparent, and hi-fi.

As Warren Huart points out, these albums contained a wide variety of genres, also within each album. The artists during this era were focused on writing great songs, no matter what style, and they and their production teams, often helmed by Padgham, did their best to push the boundaries of production as well, using the new technologies available to them. In so doing they achieved something unique: recordings that still sound current today, up to 40 years later, both in terms of the music and the production. Despite the era later on being undervalued, it inarguably was a great time for music.

This century, Padgham worked on albums by Peter Frampton, The Tragically Hip, McFly, Van Der Graaf Generator, and more. He’s also involved in the creation of library music. The total worldwide sales of the recordings Padgham’s worked on exceed 250 million, and counting. In 2019 he was honoured with the Music Producer’s Guild Award for Outstanding Contribution to UK Music.

Currently, Padgham works in his own studio in north-west London called Sofa Sound, where he has an SSL G+ 64-channel desk, and tons of analogue outboard. He is managed by Joe D’Ambrosio of JD Management.

Padgham continues to work as an invisible catalyst, pushing artists and technology to the limits, and beyond. Although he has over the decades given interviews with some regularity, his extended appearance on Produce Like A Pro lifts the lid on his thinking and his engineering and production approaches to a far greater degree than ever before.

Watch the video below to hear more about Hugh Padgham and his incredible career!