Rock and Roll on the Dance Floor: Behind the Music of “Let’s Dance”

From his early beginnings as Davy Jones, to his alien persona of Ziggy Stardust, David Bowie had spent much of the sixties and seventies, inventing and reinventing himself. The decade’s end culminated with the critically acclaimed Berlin Trilogy (Low (1977), “Heroes” (1977) and Lodger (1979)), created while he and Iggy Pop lived in Berlin, trying to escape the drug addictions that had plagued both stars. The new decade brought the release of Scary Monsters (And Super Creeps) which retained some of the european coolness of his Berlin albums but looked towards more mainstream potential. Despite the album hitting number 1 on the UK charts and containing a chart-topping UK single with “Ashes to Ashes,” Bowie turned away from the studio for another two years before beginning his next transformation. 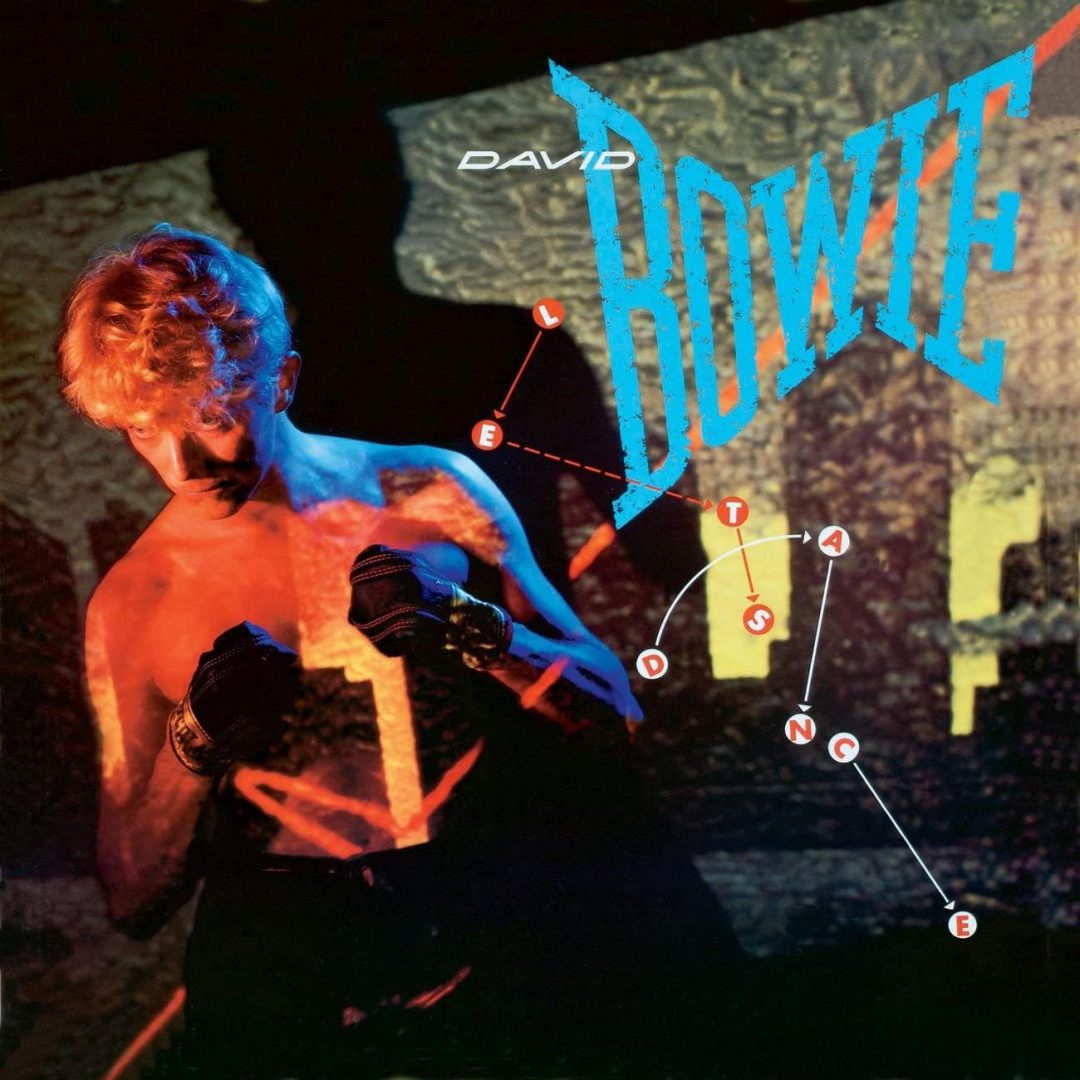 In 1983, Bowie’s reinvention took a surprising turn with his wildly successful album Let’s Dance. While most of his previous albums had ridden a dark and cutting edge of popular and avante-garde, Let’s Dance was relatively optimistic and strategically poised for mainstream success. Prior to the album’s release, Bowie explained: “It occurred to me that a lot of things that I’ve done…have been pretty much in a direction of singularity and isolationist and quite cold and I just felt…that I wanted to do something with the kind of warmth that I feel missing…in music generally, and from society.” Bowie was attempting to connect with his audience and the world in a new way, and was commercially rewarded for his efforts.  The album produced three hit singles, including “Modern Love,” “China Girl” and “Let’s Dance” – the last of which holds the honor of giving Bowie his first transatlantic #1 hit. The album was nominated for an Album of the Year Grammy in 1984, although it lost to Michael Jackson’s Thriller. In the midst of all this success, the album’s title track deserves special attention for its remarkable fusion of musical styles and influences into a commercially attractive hit track, while still carrying so much of the poignancy that has defined Bowie’s career. 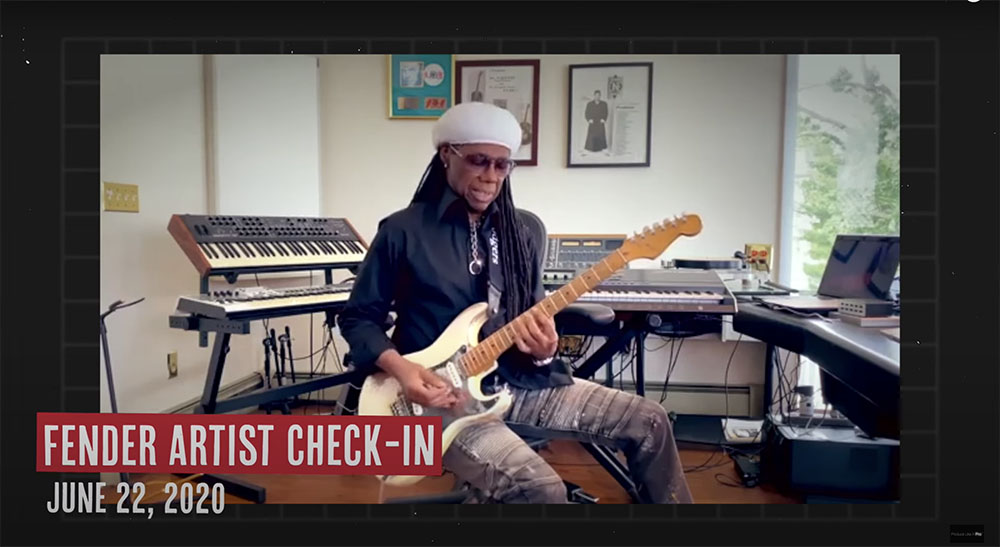 Much of the song’s character can be attributed to the arranging talents of Bowie’s co-producer and collaborator for the album, Nile Rodgers of Chic. In Chic, Rodgers had made a name for himself as a master of Black pop and disco in the late 70s with top-ten hits like “Le Freak,” “Everybody Dance” and “Good Times.” But the wave that had carried disco to its heights of popularity at the decade’s end faced a powerful opposing force. While the fall of disco can be traced through a complex web of cultural factors, the mainstream embodiment of the anti-disco sentiment, came in the form of rock music fans with their rallying cry of “Disco Sucks.” The tension between rock and disco can be seen epitomized by the infamous “Disco Demolition Night” – a promo night for the Chicago White Socks in which the Chicago radio personality Steve Dahl encouraged fans to bring disco records to blow up during the intermission between the scheduled double-header games. The stadium not only sold out tickets to the event, but thousands of additional fans showed up, filling the stadium beyond its capacity, and storming the field when it came time to blow-up the records. Niles reflected on the event saying, “It felt to us like Nazi book-burning…This is America, the home of jazz and rock and people were now afraid even to say the word ‘disco’. I remember thinking – we’re not even a disco group.” While Rodgers did not consider himself limited to one genre, Chic’s rise in popularity coincided with the rise of disco and at the time, the group felt that they could not escape association with the genre, explaining, “When disco sucked, we sucked. People couldn’t tell the difference between us and Lipps Inc.” By the time Bowie met Rodgers in club in the early ‘80’s, both were ready to take their careers and musical stylings in a new direction. 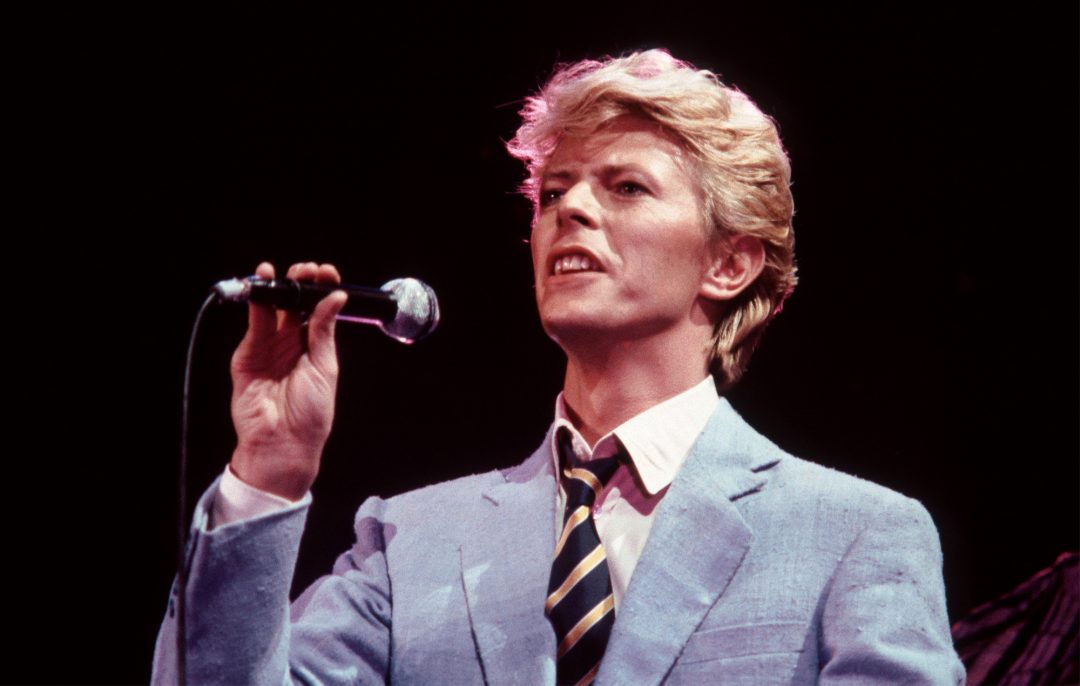 In a 1983 interview with MTV, Bowie explained what attracted him to work with Rodgers stating: “Because I wanted to redefine everything that I did, I think I also wanted to be in the position where I didn’t know the people I was working with…I met Nile in a club a few months ago and we started talking about music, and we got back, inevitably, to rhythm and blues, as all musicians get back to (however elitist they seem superficially). And we had exactly the same taste in early rhythm and blues…guitarists and big bands, and whatever from that period. And it just struck me at that point that, God, it would be great to maybe work with him.” Rodgers own memories validate that association of early rhythm and blues as the catalyst for Let’s Dance: “When David finally realized what the record should sound like, he came to my apartment one day and he had a picture of Little Richard in a red suit getting into a red Cadillac. And he said to me, “Nile, darling, the record should sound like this!” …And I knew exactly — think of how crazy this was — I knew exactly what he meant. He didn’t mean he wanted his record to sound like a Little Richard record. He said, “This visual thing is what we want to achieve aurally in every sense of the word.” Even though the picture was obviously from the Fifties or the early Sixties, it looked modern. The Cadillac looked like a spaceship, and Little Richard was in this monochromatic outfit which then later on became David Bowie in the yellow monochromatic outfit with the yellow hair.”

“Let’s Dance” becomes a contemporary imagining of the radical spirit of rock and roll that had characterized the genre’s birth. It rejects the evolution of rock towards music intended primarily for listening – a paradigm in which Bowie had already proven his skill – and returns it to its origins on the dance floor. In hindsight, we can see the qualities that made it a massive success, but at the time, it was a risky calculation. Dance music, as the Disco Demolition Night highlights, was framed as the antithesis of rock music, and as Rodgers poignantly reminds us, a color line still dominated these tensions: “When David and I began working together, not only did the people on paper not think it would work, he caught a lot of flack from his friends and inner circle and didn’t mind sharing it with me. He would actually be perplexed at how shocked they were, because to him, Bowie just thought of people as people. So he couldn’t believe it when people would say, “Oh man, you’re working with that disco dude,” and probably there were other kinds of, “You’re working with that black disco dude.” Meaning if it were a white disco dude, it might be more okay.”  In this way, the reinvention of Bowie for Let’s Dance, despite his new-found optimism and commercial aspirations, maintains some of the boundary pushing “spikiness” (to quote Bowie’s own assessment of his work), which had characterized his career leading up to this project. In creating a popular sound that would transverse across the disco/rock divide and appeal to all listeners, “Let’s Dance” fittingly rides that cutting edge of cultural and sonic discomfort that Little Richard’s rock and roll image had carried in the fifties. 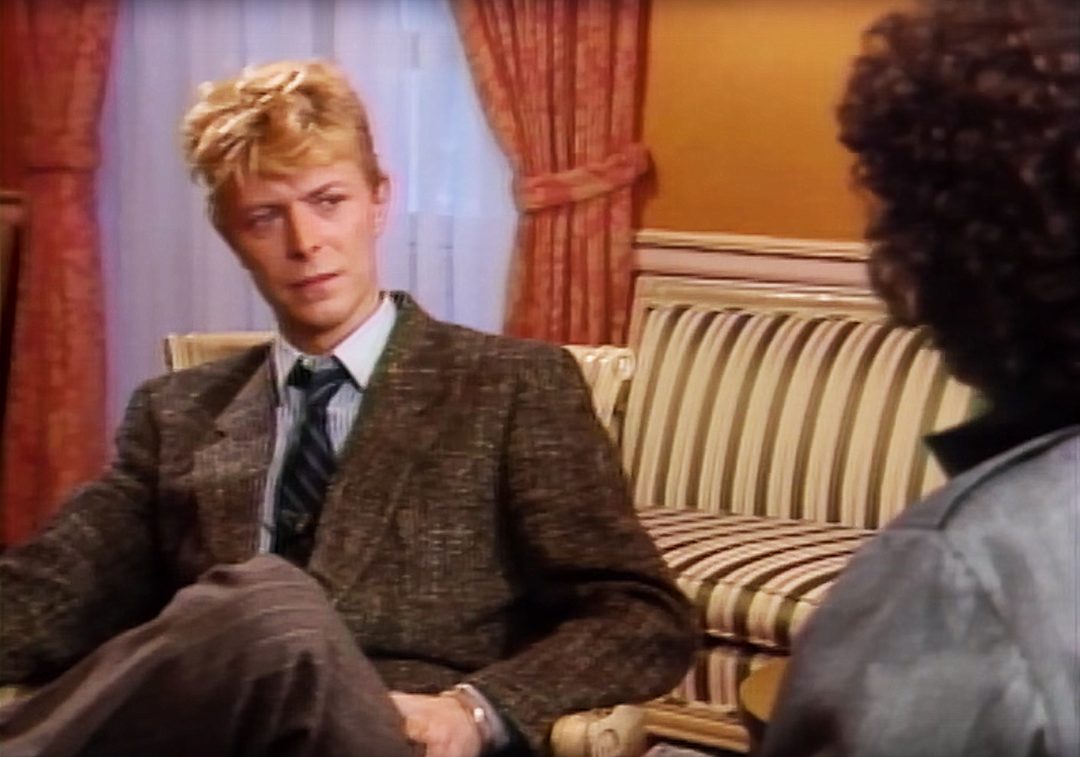 If Bowie was going to strive for a hit record after his experimental journey through the seventies, Rodger’s mastery of turning artistic visions into commercial successes was exactly the collaborator he would need. Despite its overtly dance-centered lyrics, and the rhythm and blues imagery that Bowie desired sonically, Rodgers specifically remembers the song having a folk-like feel when Bowie first showed it to him: “He started strumming a twelve-string acoustic guitar that had only six strings. What followed was a folksy sketch of a composition with a solid melody: The only problem was it sounded to me like ‘Donovan meets Anthony Newley.’ And I don’t mean that as a compliment. It wasn’t bad by artistic standards, but I’d been mandated to make hits, and could only hear what was missing.” This mandate is where Rodgers really shines. Taking the pair’s love of jazz as inspiration, he reharmonized Bowies’ draft and orchestrated the horn part. His signature is unmistakable, as Carol Cooper observes in a review for Record upon the album’s release: “Rodgers’ ideas on harmonic counterpoint pervade the album, and I don’t need to read the credits to know he had a hand in those spectacular horn charts.” Rodgers also looked back to both the Isley Brothers’ and the Beatles’ renditions of “Twist and Shout” to inspire the ascending “ahh’s” that open Bowie’s track. With Rodgers at the helm, the song became a fusion of diverse musical influences enveloped within the format of a popular dance song. 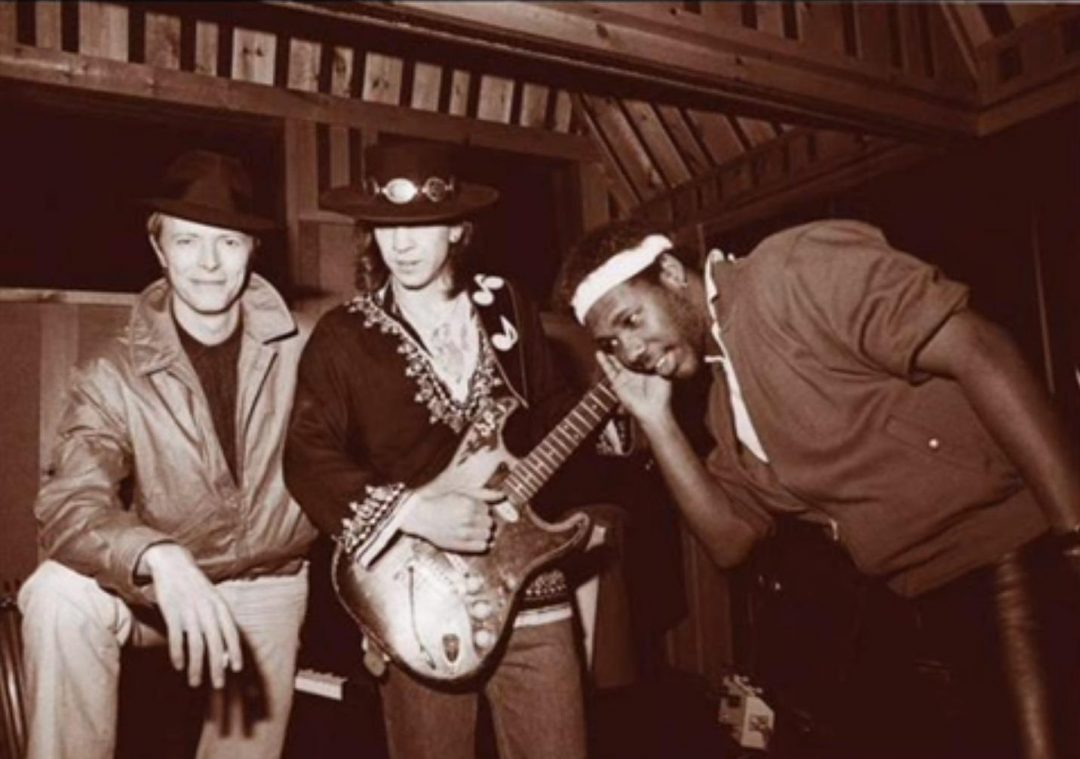 As much as “Let’s Dance” is a fusion of Bowie’s and Rodger’s talents, the song also finds its unique vibe in the talents of mixer and engineer Bob Clearmountain and blues-guitarist Stevie Ray Vaughan. Clearmountain held an impressive and eclectic resume before coming to Let’s Dance, having worked with a wide range of artists from the Rolling Stones to Kool and the Gang.  He had just finished mixing Roxy Music’s Avalon (1982) when he got pulled into Bowie’s & Rodger’s project.  Most notably, Clearmountain added the iconic delays to the guitar part played by Rodgers on the record. Stevie Ray Vaughan’s guitar added a completely different sound to the track, pulling from the electric blues tradition. Prior to the album’s release, Bowie described the previously unknown guitarist as “just about the greatest of the new blues guitarists” and called his playing “the most devastating city rhythm and blues” he had heard in years. Rodgers would later describe Vaughan’s session playing as a powerful moment in his own musical memory declaring: “One of the greatest moments in my rock and roll history is the look on Stevie’s face when he heard the groove and guitars of ‘Let’s Dance’. He was like, ‘What the hell am I gonna play? This is perfect!’ Having said that I love the contrast between my guitars and his and when you hear his first solo on ‘Let’s Dance’, it’s just one note. It’s the most perfect B flat I’ve ever heard in my life!” 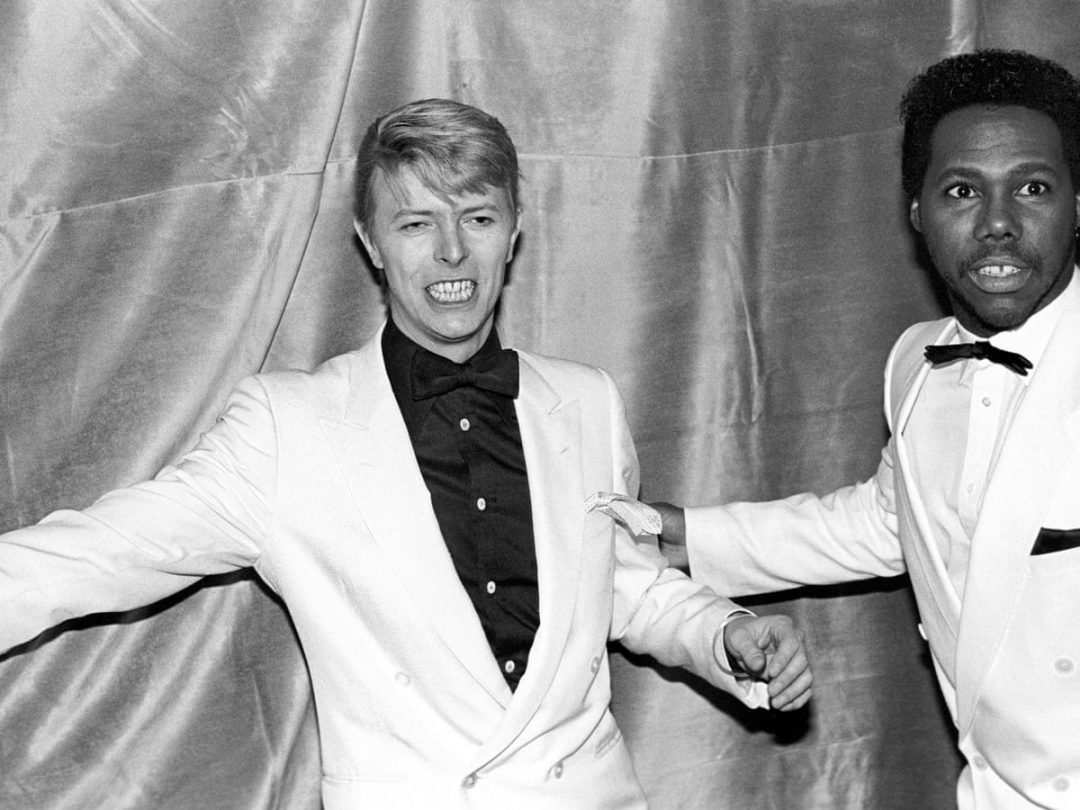 Bowie’s ability to spot and bring together talent was one of his career defining features and it earned him the respect of his musical peers. Decades later, when asked to name his favorite Bowie track, Jimmy Page responded: “I’m going to say ‘Let’s Dance’ because it introduced everybody to Stevie Ray Vaughan. People were always saying, ‘Who’s the guitarist on that?’ ….He was taking from various sources and putting it together, but that’s an art form in itself.” In this assessment of “Let’s Dance” significance, Page captures what others have struggled to define. Bowie’s reinventions of himself, while brilliant, have relied heavily on his ability to build and reimagine music through the inspiration of many different sound worlds and to take the cultural temperature of the society in which he lived. 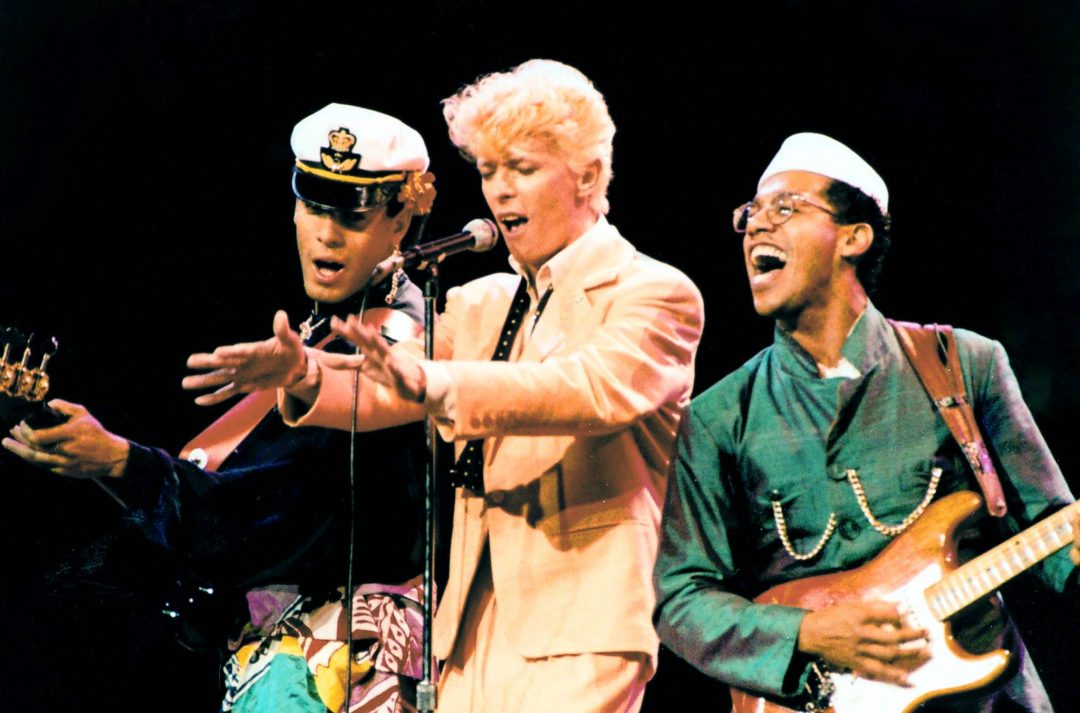 Describing “Let’s Dance,” Bowie explained “It’s ostensibly a dance song, but there’s a particular type of desperation and poignancy about it.” This is what musicologist Tiffany Naimann calls “the dual nature of David Bowie as a musical artist: the rock star who creates art music, and the highly produced pop star reveling in artificial and visually engaging spectacle.” With “Let’s Dance” Bowie takes this duality to creative brilliance. In his refusal to accept the cultural divide between disco and rock at face value, he creates a mega-hit song that blurs genre lines and pushes audiences and musicians beyond their own sonic and cultural expectations.