In the vast world of software EQ, is there still a place for hardware titans Solid State Logic? Let’s decide in this SSL Native X-EQ 2 review.

SSL calls the Native X-EQ 2 a mastering grade plugin that’s powerful and light enough on CPU to become every engineer’s “go-to.” It certainly boasts the features to make that a reality, with 24 bands, more filter types than you know what to do with, band solo to weed out trouble areas, spectrum analysis, and a whole lot more.

From a GUI and workflow standpoint, it looks like a lot of competitors out there (ahem, FabFilter Pro-Q). So anyone familiar with modern digital EQs should have no trouble diving in and getting comfortable with the SSL Native X-EQ 2.

The sound is arguably more open and transparent than other similar plugins, thanks to what SSL calls their proprietary “anti-clamping” algorithm. We’re going to spend some time investigating this, because it’s probably the most unfamiliar and vague feature of the SSL Native X-EQ 2.

Essentially with digital EQs, there’s an issue of cramping that occurs when you try to boost the upper end of the frequency spectrum — namely with bell-shaped boosts. The problem is that you’re quickly approaching the Nyquist frequency, or the very upper limit of what’s recordable/translatable in digital audio. In this case, 22.05 kHz and 24 kHz when working in common sample rates 44.1 and 48 kHz. 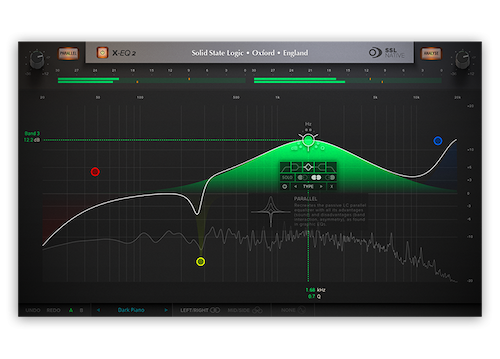 In practical usage, boosting for air somewhere between 15 and 20 kHz can result in cramping; it isn’t always obvious, but carefully trained ears may detect distortion, harshness, or other artifacts in the very top end. Now here’s the thing: plugins already have a workaround for cramping called oversampling. What the plugin does is upsample the audio, pushing the upper frequency boundary farther away and thus avoiding cramping. And then it downsamples the audio back to the session sample rate.

Oversampling works, but it’s often CPU-heavy. SSL developers came up with their own formula for oversampling which doesn’t cost any additional CPU; the “how” isn’t something SSL software engineers want to reveal, as it’s a unique feature of the plugin.

Another interesting feature is parallel mode. In a standard serial EQ, each band is fed the output of the one prior to it; they form a chain, or “series,” arriving at the main output. In parallel, each band receives its own separate input from the main source and sums them together at the output of the EQ. Parallel mode has the potential to alter the interactions between bands and change the feel of the plugin. 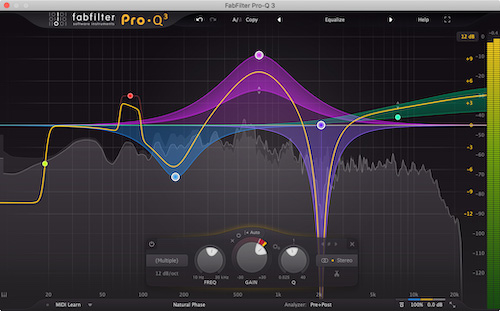 FabFilter Pro-Q 3 is widely considered the industry-standard digital EQ. In many ways it’s similar to SSL Native X-EQ 2, and in many ways its features are far more extensive. Take something obvious like the dynamic mode in FabFilter Pro-Q 3, which turns any band into a volume-specific boost/cut. The idea is the same as a multiband compressor; the plugin applies a boost or a cut only after it surpasses a set threshold. So you can achieve things like de-essing — alongside surgical EQ, tonal EQ, and more — all inside FabFilter.

You can even open up Pro-Q 3 on one track and monitor the frequency spectrum of an instance on a completely different track and see if there are any colliding/competing frequencies. This is barely scratching the surface of how deep Pro-Q 3 goes. At full price, FabFilter ($179) is superior to SSL ($299) as well. Most people would probably purchase Pro-Q 3 before SSL X-EQ.

SSL Native X-EQ 2 is a cool plugin. It may not reinvent the wheel as far as modern digital EQs go, but it sounds good and has enough features for most users. The biggest issue, in my opinion, is its cost ($299). However, you can sometimes find it on sale at nearly 1/10th of the price, in which case it’d be worth trying out — even if you already own FabFilter.