How the Tyrell N6 Was Born

Tyrell is actually the name of a project spearheaded by the German music publication Amazona. The magazine conceptualized a low-cost analogue synthesizer based on features and ideas from reader polls and forum discussions. Led by the community, the original Tyrell became an interesting concept similar to Roland’s iconic Juno 60. The hardware synth could utilize a few basic modules, including some novel features, at a cost most people could afford.

Unfortunately the reality of producing a hardware synth is a massive, years-long undertaking—something Amazona understood and didn’t have the resources to pursue. U-he founder Urs Heckmann stepped in, offering to turn the concept into a freeware synthesizer instead. Within a few weeks, the Tyrell N6 plugin was out for beta testing, and within a few months, the final release version debuted in April 2011.

Now in its third version, the plugin is completely free from Amazona and receives regular updates. Follow the link and scroll down to find downloads for Mac OS (Catalina-ready), Windows, and Linux. 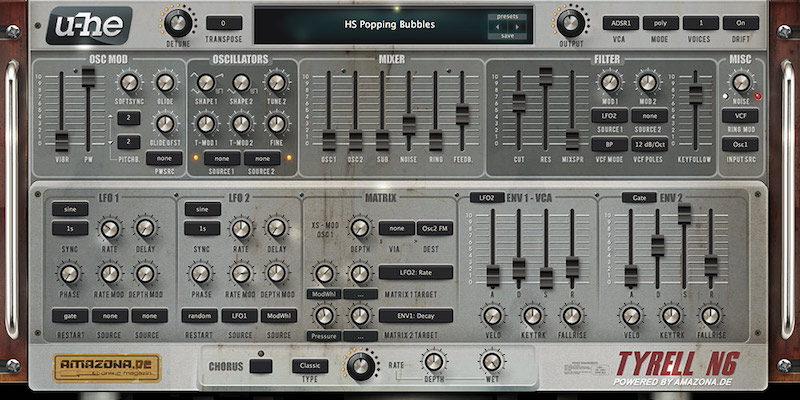 The possibility of sound is nearly endless with this plugin; if the 600 factory presets aren’t enough for you, the Tyrell N6 has a dedicated user-base who uploads custom patches for anyone to use. U-he and Amazona have gone so far as to make hundreds of these user presets available in the Tyrell N6 Patch Library.

Tyrell N6 by u-he in collaboration with Amazona is definitely one of the top free synth plugins out there. The sound is like a cross between u-he’s modular synth, ACE, with the features of a Roland Juno 60. If exploring soundscapes is even remotely interesting to you, the Tyrell certainly delivers on that front.

For what’s self-described as “compact” and “sporty,” there’s an overwhelming variety of sounds you can get out of this synthesizer. Considering the price, it’d be remiss not to have at least give it a try!