What Is Metadata and Why Does It Matter?

Metadata is an important element of music distribution. You’ve probably heard the term tossed about before, though the meaning of it isn’t always clear.

At first glance, metadata seems like an overly technical term. It’s basically data inside of data. In a musical context, it’s pretty straightforward; metadata is extra information encoded into audio files (the primary data). It includes everything from the artist and song name, to featured artist(s), release dates, songwriting credits, and more. Based on this info, your music can then be identified, classified, categorized, and discovered.

A primitive form of encoding this information goes back to CDs, which at first only included a table of contents noting the number of tracks and their lengths. CD-Text came out in 1996 and stored additional metadata, but it wasn’t long before digital audio files took over in the early 2000s. At that point, these files could store extensive metadata.

What Information Does Metadata Include?

Why Is Metadata Important?

Encoding this information is essential for categorizing and identifying your music on various distribution platforms. It’s also critical for proper crediting and royalty splits. Think about how a simple mistake in metadata could wind up with a songwriter getting a smaller cut than what was negotiated. Or how an assistant engineer was left out entirely, resulting in no credit for their work on a project. Getting all of this info absolutely correct is critical.

What Metadata Should I Add? 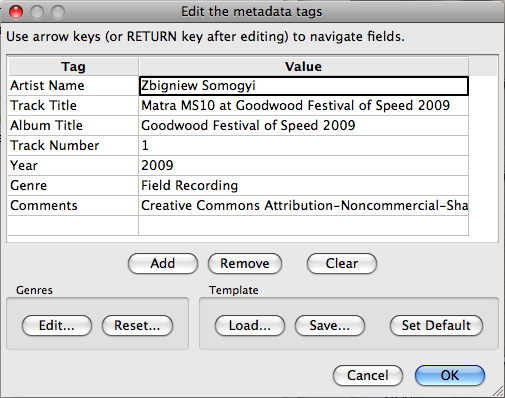 You should always include the following:

These are the basics. If there’s any doubt about what to include, consult your distribution service’s upload page and fill in as much information as you have. The same can be said for using tagging software; just fill in whichever fields you can.

How to Embed Metadata Into a File

Your distribution service handles it for you. All you have to do is fill out the appropriate information for each song that you upload. Otherwise, you can manually tag audio files using a service like Kid3.