Many of us are guitarists, and most of us probably love to geek out on gear and tone as much as we like to actually play. After all, finding our individual “holy grail” tone is half of what makes playing guitar so much fun! But what happens when it’s time to record and mix? What we hear in the room versus what we hear tracked can be two different things. Luckily, there are a handful of go-to tricks for mixing guitars to get the most out of the instrument, while striking a balance with everything else.

Have we stressed the importance of high pass filtering enough yet? Unfortunately, there’s so much misinformation out there about filtering, particularly high pass filtering. Some engineers have even gone so far as to say not using HPFs is preferable. In reality, this just isn’t the case.

Filtering does so much of the heavy lifting when it comes to balancing mix elements and letting each instrument live in its own frequency range. Of course, when it comes to mixing guitars, filtering is no exception. You don’t want the guitar to clash with bass, so filtering out its lowest frequencies is essential.

Depending on tuning and other factors, start high passing somewhere around 80 Hz. In many cases you’ll find that you can even go up much higher.

I don’t know about you, but I often take for granted the idea that effects (pedals) can be used tastefully in spare amounts. As a guitarist myself, I tend to think of tone as an all or nothing venture: this is my clean tone with reverb and delay, this is my chorus tone, or my flanger tone, etc. 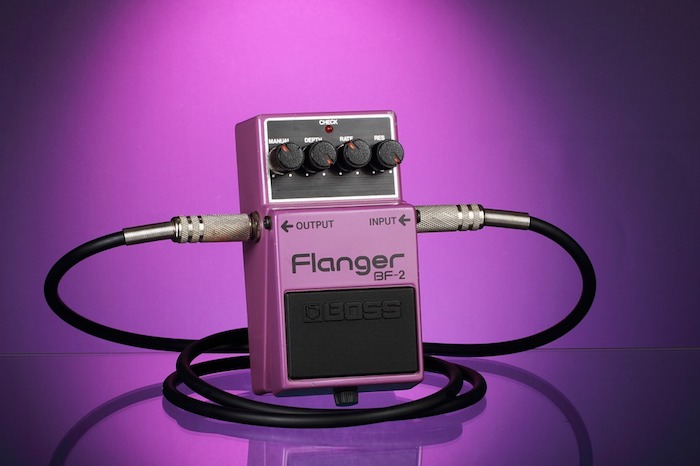 When mixing guitars, though, you can add just a bit of modulation for added character and depth. It doesn’t have to be a completely “effected” sound at all. Try using a hint of chorus or flanger on a guitar mix some time; you might find something really interesting!

If your guitar mix feels a bit thin, try tossing on a stereo delay for some extra width. Something short, just beyond the Haas effect, maybe between 60 and 100 ms, will widen your guitar’s sound without being noticeably delayed. The idea is to create a false doubling effect without taking up too much space in the mix or sounding totally wrong.

One of the first guitar tracking/mixing techniques I learned was to double track the rhythm parts. Especially great for hard rock/metal, tracking two unique performances of a section and panning them left and right creates a massive sound.

Experiment with hard panning each take, or bring them in slightly for less width while retaining depth and dimension. If you’re a metal player and haven’t tried this yet, you’ll be blown away by how crushing it can sound! 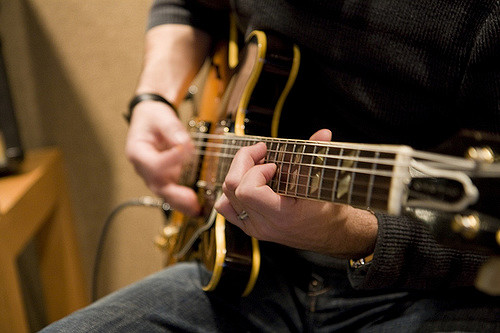 If you try to simply duplicate a single take and pan those opposite each other, you’re only panning a mono source. Two different performances and the subtle differences between them are what creates the stereo width and depth we’re after.

To compensate for if/when your track is summed to mono, use different guitar tones on each of the separate channels!

If you’re trying to gel a guitar in a dense mix, try using mono reverb returns instead of stereo ones. This gives you more control over where the guitar sits in the mix. The reverb gives it the space it needs, and keeping it mono means you can push it to one side or the other. Stereo reverbs are less controlled because they fill the stereo field entirely. 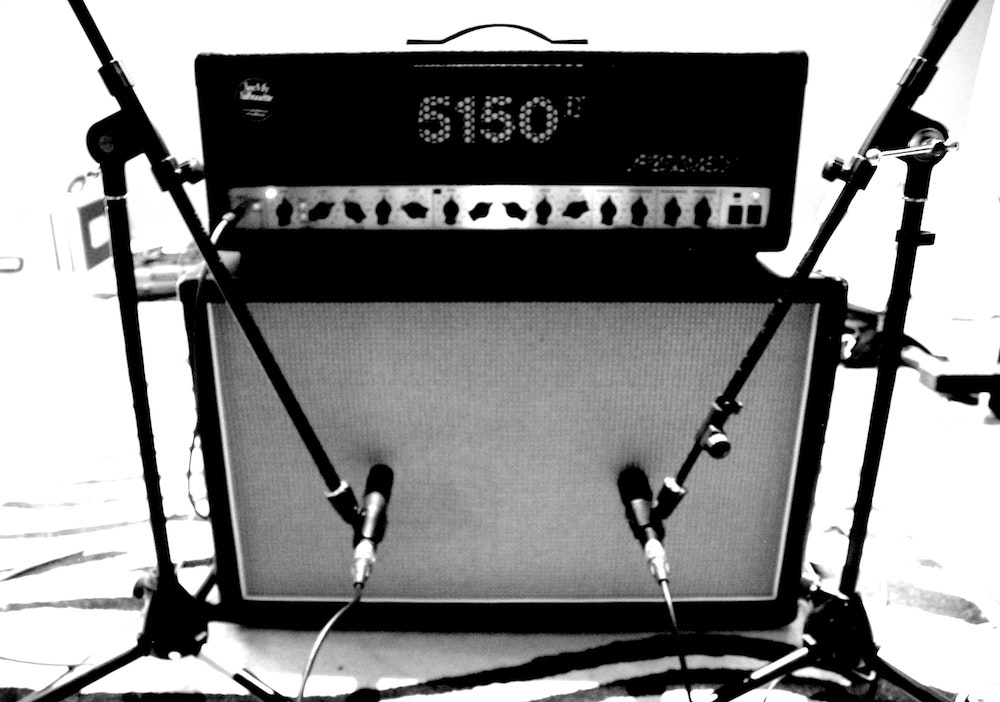 Whether you’re mixing with amp sims on a DI or tracking an amplifier, keep the distortion in check. Some of the current heaviest progressive metal bands actually use very little distortion; instead, they push their amp or sim harder with an overdrive. The crunch and grit is still there, but with more clarity than a fizzy, noisy distortion can offer.

7. Focus on the Midrange

Guitars are midrange instruments. Don’t sweat the low end too much; that’s where the bass guitar shines. And don’t sweat the high end (8+ kHz) either; there isn’t much information up there. Instead, focus on getting the guitar’s dominant frequencies to sound their absolute best.

Every guitar is a little different, but sweeping around with an EQ can help you find your instrument’s sweet spot.

High pass filtering is essential—hopefully that’s been instilled! But so is low pass filtering. We’ve just discussed how guitars are predominantly a midrange instrument, with little useful information in the low, low end, or the high, high end. Filtering out some of the unnecessary highs will leave room for every other important mix element. Mixing is all about balance, and mixing guitars is no exception. 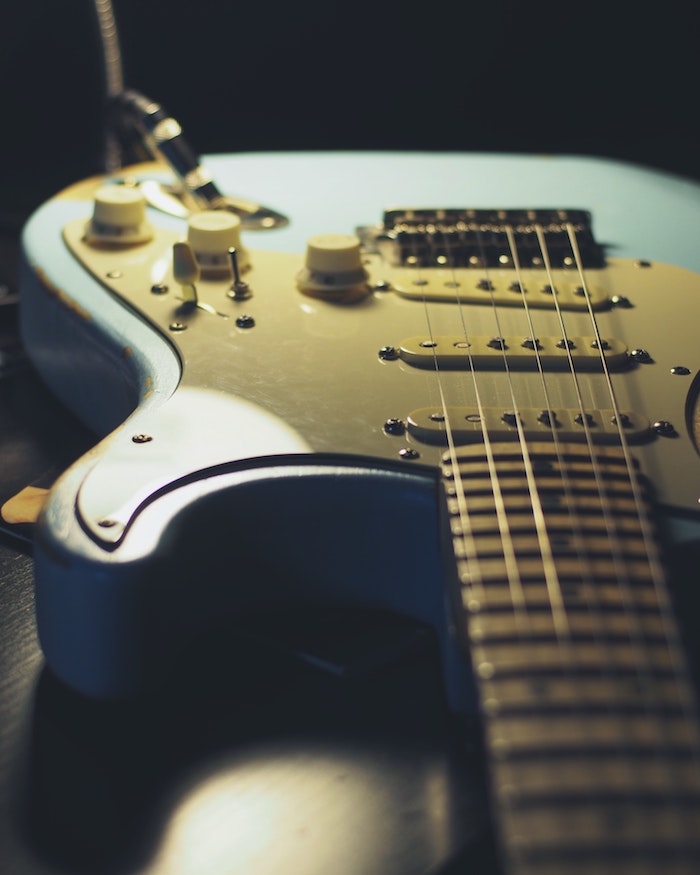 It should go without saying that bussing is your best friend. If you have 4 or more tracks of rhythm guitar, you could take the time to process them all individually, or you could route them to a bus with a guitar mixing chain already on it. This not only saves time and processing power, but also ensures cohesion amongst the various tracks you’ve routed there.

Mix in context. It’s as simple as that! Understandably, if you’re sweeping for surgical EQ, soloing is perfectly acceptable. Just be sure you’re not spending all of your time mixing guitars by themselves. It’s a common mistake to make something sound amazing on its own, but when the rest of the mix comes in, all the work we did doesn’t sit right.

Layering is a great way to add excitement and movement to an otherwise basic or bland rhythm guitar section. Riffs alone can be great, but sometimes they feel a little empty. If that’s the case, you can try different ways of filling in the sonic gaps.

Octaves up or down, depending on where the main riff is played, are one of the easiest ways to add some excitement and ear candy to a sparse rhythm part. You might try following all of the chord changes with octaves, or maybe only sprinkle them in here and there.

If there’s enough space in the arrangement/mix for it, guitar harmonies can be a cool way to bulk up a thin section. Bands like Iron Maiden, for example, immediately come to mind; they rely heavily on melodic guitar harmonies. You may not want to write an entire song around harmonized lead lines, but sneaking them in on a verse or chorus could sound great. Try it!

Adding syncopation with single note accents is another production technique you can use to spice up simple rhythms. In the video above, a dotted 1/8th delay was used to create rhythmic movement alongside the chorus’s main chords. You could also take things a step further, record two parts, and pan each left and right.

Want to go even further? Record two more parts, either an octave up or down, and layer those in as well. The idea isn’t to have the delayed lines be out front in the mix, but to bury them in a way that they add movement to the rhythm section without overpowering it. The effect can be really cool!

A Touch of “Chaos”

A tremolo-picked lead line in the upper registers sounds surprisingly good when it’s layered in with a rhythm guitar part. Using delay and even destroying it with a distortion/amp plugin like SansAmp is a very effective way of incorporating some excitement, interest, and overall density. Alongside the previously mentioned layers, it sounds rather fantastic. Don’t forget you can add in an octave or even harmonized section of it, as well!

Mixing guitars isn’t just about compression, EQ, and creative effects in the box. It’s actually a lot about production—recording various layers, double tracking for size and width, dialing in the right tone at the source, and more. Before you start mixing guitars, ask yourself whether a part of the song would benefit strictly from fixing bad sounds and adding new effects, or if a production/arrangement change might better serve the song!