I have a very exciting demo for you today: another Abbey Road plugin by Waves Audio! This one is the Abbey Road Saturator. Everything Abbey Road produces has a really unique sound, so I am very excited to try this out!

Saturation is the heart and soul of analog recording and mixing. The Abbey Road Saturator is modelled directly from the time-proven saturation chains at Abbey Road Studios and provides inspiring saturation and distortion unlike any other device.

This plugin contains to versatile desk distortion flavors: the crunchy tube REDD sound, and the rounded solid-state TG12345 tone, with the sophisticated input, gain, and output stages of both consoles calibrated to perfection by Abbey Road’s engineers. 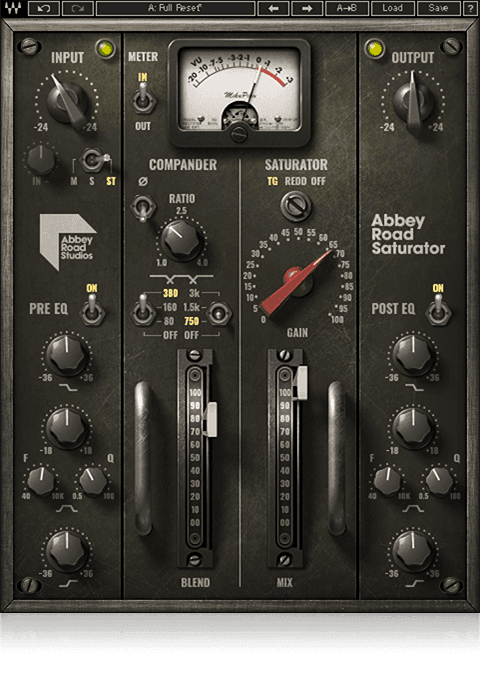 This plugin was produced in collaboration with Abbey Road Studios, of course, and Abbey Road engineers have been known to experiment endlessly as they have a wealth of gear available to them, meaning they often create “happy accidents” by pushing the gear to its limits. The Abbey Road Saturator captures one of these “happy accidents”.

In 1962, EMI Central Research Laboratories patented a tape noise reduction system called the TG 12321  – a “compander” that compresses on input (encoding) and expands on output (decoding). The first generation of pop engineers at Abbey Road discovered that using the encode-only portion of the process resulted in a high-frequency emphasis that added air and excitement and helped instruments cut through the mix.

The Abbey Road Saturator is modelled after the original TF 12321 unit and produces a one-of-a-kind excited saturation effect. This plugin also gives you flexible control over the compander’s crossover frequencies, allowing it to focus in on different ranges depending on the source material.

I had so much fun playing around with this plugin and testing out all of the great things it can do! What I did to the track in the video is really over-the-top, but I just wanted to see what this plugin was capable of! What I would normally do is probably get in there and put the plugin on individual elements and introduce very small amounts, or do the over-the-top stuff and blend it in lightly. That would give us that edge of the console we are all looking for!

The sound that this plugin produces if very characteristic of that iconic album it is named for, and I love it!

Click here to learn more about the Abbey Road Saturator!

Watch the full video below to see this great plugin in action!