Acoustic Guitar and Vocal Recording Tips: How to Nail Your Takes

If you’ve spent any significant amount of time experimenting with recording on a professional or just a hobbyist level, there’s a good chance you’ve been asked to capture a singer-songwriter before. In today’s world of modern digital recording, our natural instinct is to record the acoustic guitar first and overdub vocals. While that technique would inevitably yield the cleanest results, it isn’t always in the musician’s best interest. Many artists are their most comfortable and confident strumming and humming at the same time, in which it’s our job to record the material the best we can. We’ll look at some basic acoustic guitar and vocal recording tips to take some of the mystery out of the process.

The challenge of recording a singing guitarist stems from having two naturally loud sound sources very close to two open microphones. Placement pending, of course, whenever you introduce multiple mics in close proximity, you’re opening yourself up to some sonic headaches. At the end of the day, though, consider how many timeless songs and albums have been recorded in a more or less “live” way, and open yourself up to the possibility that “pristine” doesn’t always mean “musical.” In most cases it’s the less than perfect elements that make a great song what it is — so let that be a disclaimer before we dive into the tips.

Isolating Multiple Sound Sources in Close Proximity to Each Other

Microphone bleed is what we’re worried about here. As stated above, two loud sources next to two open microphones means acoustic guitar is going to bleed into vocals and vice versa. It’s improbable to completely remove any and all spill, so don’t make that your priority. It’s good practice to try and isolate the mics from their environment so that any crosstalk between them isn’t full of room tone. You can do this in a number of ways, such as placing absorbers or absorptive material around the player for a bit of isolation.

When the spill gets too much, you end up with phase issues. The problem is, for example, that the acoustic guitar microphone, which is further away from the vocal, will pick up vocals at a time delay from the actual vocal mic. Then you get this weird, out of sync effect that sounds thin and unnatural. Our job, of course, is to try and avoid that.

Very few of us have the luxury of owning an extensive mic locker or having access to one; many of us are recording at home with whatever we happen to have at the moment. The good news is you can achieve great results with that budget cardioid condenser and SM57, or whatever you happen to own. There isn’t necessarily right or wrong equipment here — preferences, sure — but a little technique will go a lot farther than the absolute best microphone for the given source. 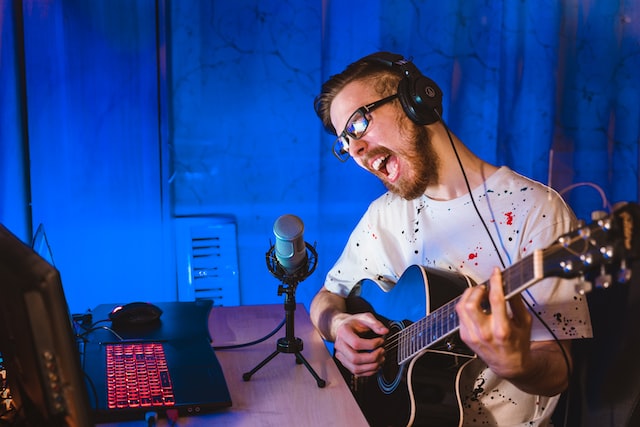 With some of the challenges associated with acoustic guitar and vocal recording in mind, we can go over some simple and basic tips to get better results. As is normally the case with anything recording and music production, mileage varies. What works in one instance may not in another, so it’s always advisable to experiment, try things out, and let your own ears be the judge.

The first and easiest way to record guitar and vocals simultaneously is with one microphone. Ideally this would be a large diaphragm condenser placed within about a foot or so of the performer. A good position is slightly above the middle of the fretboard, perhaps with a gentle upward angle aiming towards the musician’s mouth. The vocals should come in fairly dead-on, while the radiant sound from the guitar’s body will fill in as well.

In most cases, you’re going to close mic both the guitar and vocalist separately. You’ll have to navigate the common issues listed above, but you’ll have independent control over both the guitar and the vocals. Obviously this is a huge benefit come mixdown, and it also lets you capture a more optimal recording of either element.

The vocal mic is arguably the easiest to position; you want it as normal as possible, as if you’re recording just vocals on their own. One placement to try is to tip a cardioid condenser on its side and angle it slightly upward so that the hot side of the mic begins to face away from the guitar. That’ll help reduce some of the off-axis guitar sound entering the microphone.

This one can be tough to get right based on its interaction with the vocal microphone. Generally speaking, many of the same placements we’d like when recording guitar alone are where you’d want to start here — ideally, a small diaphragm condenser does a wonderful job. For example, pointing a mic where the neck meets the body or between the bridge and soundhole. Just how the vocal mic is angled upward and away from the guitar, angle the guitar mic slightly downward and away from the vocals. These are just starting points, so let you ears determine what’s working and what isn’t, and adjust accordingly.

Stereo miking techniques are worth a try. Results would be similar to the one-mic method above, but with a wider stereo image. The problem is getting the vocals to sound centered, which is why M/S is a worthwhile technique to try on acoustic guitar and vocals. The mid cardioid microphone can capture a more centered vocal sound while the bi-directional sides mic can carry the heaviest load of guitar.

As easy as it is to have a “fix it in post” attitude with today’s digital marvels, there’s truly no fix for a bad recording. If you have bleed and phase issues all over the place, to where each separate mic is virtually indistinguishable from the other, you’re going to have a bad time. It’s absolutely worth the effort on the front end to place the microphones in a thoughtful way that eliminates the need for intensive post work later on.