The Best De-Esser Plugin for Your Vocals (Free & Paid)

Mixing professional sounding vocals isn’t easy. Before even getting to that stage, it starts with an amazing performance and an excellent recording. Covering those two bases is fundamental and certainly helps make the mix stage more creative and fun rather than being about patching holes in a lackluster recording. Still, there are aspects of a vocal performance that will almost always require a bit of detail-oriented repair work; thankfully, the best de-esser plugin can smooth out harsh frequencies and keep a vocal sounding its best.

Sibilance is primarily associated with “s,” “sh,” and “ch” sounds in the human voice. These are normal speech sounds that occur in everyone’s voice, though some people’s sibilance is more pronounced than others. Regardless, whenever you put someone on a microphone, you’re going to emphasize both the good and the bad parts of their voice.

Sibilance typically consists of higher frequencies that can sound really harsh in a recorded vocal. It’s often distracting for the listener whenever there’s an “s” sound that appears to be louder or more intense than the rest of the vocal’s frequency content. For that purpose, we employ a de-esser.

What Is A De-Esser & How Do They Work?

A de-esser is basically a frequency-specific compressor. It sort of works like a single band of a multiband compressor, if it helps to think of it that way (also a band of a dynamic EQ). You can select a center frequency around which the sibilance is the most present. When the level of that frequency surpasses the threshold, the compressor kicks on and reduces the volume of the center frequency and those most offensive adjacent frequencies.

Why You Should Be De-Essing You Vocals

As engineers, sibilance is distracting when you know what to listen for. And if the average listener is hearing it, then it’s absolutely way too much and detracts from the vocal performance. De-essing is a relatively straightforward way to tame those harshest frequencies for a rounder, smoother vocal with a more consistent frequency response across the spectrum.

If you’ve ever wondered how a vocal can be bright and modern sounding without being harsh, there’s almost a guarantee that a de-esser, or multiple de-essers, are somewhere in the chain. More experienced mixers might even isolate sibilance in the waveform and clip gain it down before using a de-esser plugin!

The Best De-Esser Plugin for Your Vocals (Free & Paid)

Let’s have a look at several of the top de-esser plugins for vocals, both free and paid. As always, this is by no means a comprehensive list, but rather a starting point for those looking to fill out their collection. Feel free to experiment and find what works best for you — very little is gospel in the world of music production! 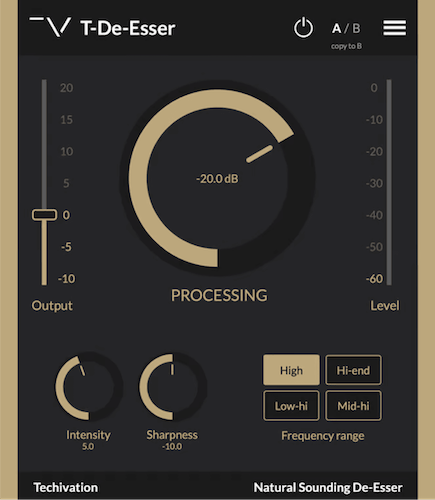 T-De-Esser by Techivation is a streamlined plugin that simply tames harshness while retaining a natural and musical sound. One of the challenges of de-essing is overdoing it to the point that it’s obvious. T-De-Esser is easy-to-use and helps prevent some of those pitfalls. It gives you the option of choosing between four different high-end bands; you don’t have to pinpoint the exact frequency, but just the general range. The plugin handles the rest.

Lisp isn’t just referring to those sibilant sounds. It cleverly stands for “level-independent sibilance processor” that’s about as easy to use as it gets. It requires no frequency setting and works regardless of the input level. The plugin automatically detects the worst sibilance and pulls it down as transparently as possible.

The Antress Modern De-Esser is an analog-style de-esser with an intuitive settings layout. One of the most important parameters is the frequency setting ranging from 3000 to 9999 Hz — well within the broad range of the harshest sibilance. The next most important parameter is the threshold to determine the amount of gain reduction applied to the selected frequency. 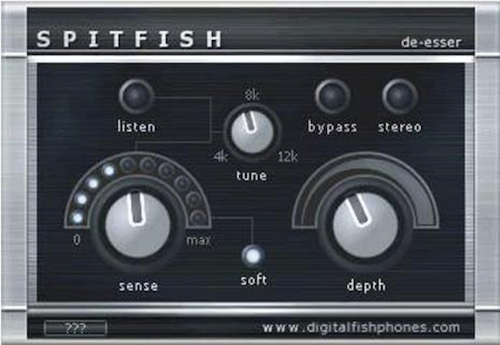 Spitfish by Digitalfishphones is a free de-esser plugin for Windows operating systems. It makes use of a stripped-down interface intended to be accessible for anyone looking to enhance their vocal sound. You’re able to tune the frequencies between 4 and 12 kHz, and dial in the Sense and Depth controls for the desired amount of de-essing. 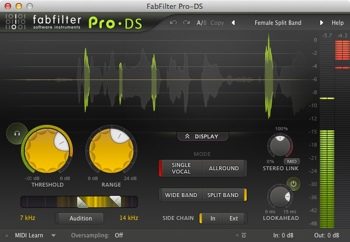 Fabfilter’s plugins are current industry standards. A major part of MO is producing high-quality, transparent plugins that maintain a recording’s character and do absolutely no harm to existing audio. Pro-DS is a feature-rich de-esser that’s as transparent and musical as they come, helping to soften up sibilance without producing a noticeable “effect” on the vocal. The learning curve is slightly steeper than with other plugins, but there’s a reason engineers swear by Fabfilter. 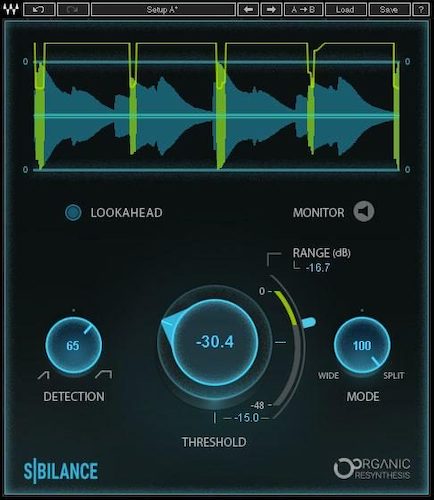 Sibilance by Waves is an innovative new de-esser that’s as effective as it is affordable. Internally, Sibilance utilizes Waves’s proprietary Organic ReSynthesis engine — without getting too far into the woods with that, it’s how Waves manages to keep the plugin as transparent as possible. Overall, this is a remarkably easy-to-use de-esser with professional sound quality. 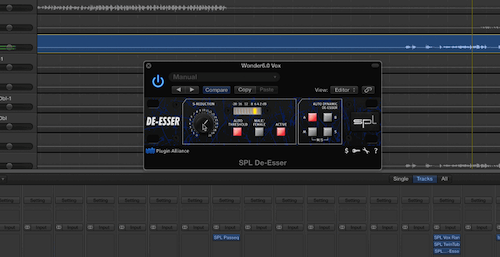 SPL’s hardware de-essers are considered some of the best in the business. The collection by Brainworx contains analog emulations of two of SPL’s most applauded units. These intelligent de-essers don’t necessarily reinvent the wheel, but they don’t have to. SPL’s auto detection is second to none; simplify your de-essing stage with Brainworx’s SPL emulations.