The C214 is a fixed-cardioid large-diaphragm condenser microphone. It shares many of the same qualities that have made the C414 a studio staple for decades. In this AKG C214 review, we’ll highlight its specs, compare it to popular competition, and more.

The AKG C214 is designed as an affordable alternative to the high-end C414 series. Like the AKG C414, the C214 offers a one-inch capsule on an integrated suspension, reducing mechanical noise.

Next, it has a switchable 20dB pad for loud sources up to 156dB SPL. God help anyone recording well beyond the threshold of pain — but jokes aside, it can record any source without distorting. The mic also features a switchable high-pass filter to reduce proximity effect when close miking.

Finally, the C214 captures sound by combining one capsule of the legendary C414 dual-capsule system and the patented AKG Back-Plate Technology. The result in an outstanding performance on par with the famous C414 XLII. 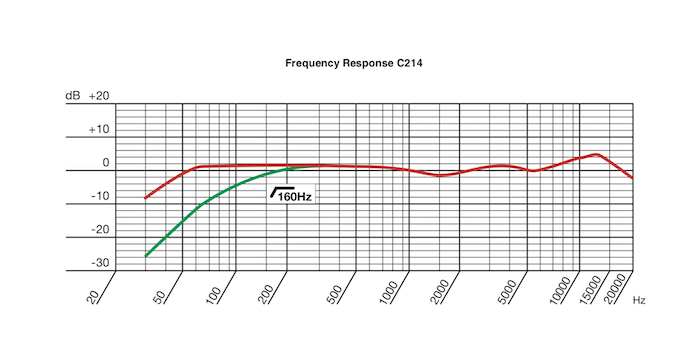 The C214’s frequency response features a gentle roll-off from 30 to 60 Hz, then stays relatively flat until about 1k. There’s a slight dip in the midrange between 1k and 2.5k, presumably to tame some of the harshness in that area. This is followed by a tiny 3.5k boost, and finally an upward incline starting at 6k before a drop-off past 13 or 14k.

High-end boosts like the one we see here are pretty common in more affordable condenser microphones. They’re notably hyped and bright; even harsh in some instances. Compared to the C414, for example, the C214 will sound much brighter. However, we’re talking about a microphone that’s 1/3rd the price.

No AKG C214 review is complete without mentioning vocals, because it’s often touted as an inexpensive vocal condenser. The sub-$500 market is very saturated, with the 214 coming in at $349. There’s a difficult decision to be made when picking up what might be your first condenser mic for your home studio.

The good thing is that AKG has a legacy of quality behind them. And since the C214 shares some of the genetics of the iconic and incredible sounding 414, this would be a great choice on vocals.

Especially for pop/hip-hop/R&B, the high-end boost and ‘hyped-ness’ will work really well for getting a modern, in-your-face sound right at the source. The C214 captures details nicely, so all of the more nuanced aspects of a vocal performance will shine though too.

Many users pick up the C214 specifically with vocals in mind, so it has sort of become a purpose-specific mic in practice.

The 214 shares DNA with the 414 by using the same capsule — a single capsule, compared to the 414’s dual-capsule design. This is significant, sure, but the design is its own beyond that.

If money is no object, you’d get more features and arguably better sound with a 414. But the 214 hold its own in the price range it occupies and is an excellent value overall.

The Rode NT1 — not to be confused with the even more popular NT1-A — is another affordable LDC offering. It comes in around $80 cheaper than the 214, so it’s certainly enticing.

Looking at the NT1’s frequency response above, we can see that it’s very flat compared to the 214. It’s a straight line from 30 Hz all the way to 4k where it starts a gentle slope upward before heading back down around 10k.

What this means is that there’s a slight presence boost, but it’s nowhere near as pronounced as the 214’s. There’s no midrange dip, and low-end roll-off between 20 and 30 Hz is so low it’s virtually inconsequential to the majority of instruments you’d record with a large-diaphragm condenser.

Where the 214 has a definitively colored sound, the Rode NT1 is more natural in its capture of sounds. The NT1 does not have a pad or high-pass filter, but it does come with most of the accessories you’d get with the 214 (shock mount & pop filter). Its pattern is fixed cardioid as well.

If natural is your thing, the NT1 has one of the flattest frequency responses of any mic ever. It can handle high SPLs, it has some of the lowest self-noise of any mic ever, and it’s less than $300. Stiff competition, no doubt.

AKG sometimes give themselves a run for their own money, and the P420 is a great example of that. This is one of those mics where it’s amazing how many features they can pack into a $149 package — yes, it’s only $149.

The AKG P420 has three polar patterns, a 20 dB pad, and a high-pass filter at 300 Hz (not suitable for everything, but worth a go on hi-hats or overheads, for instance). It’s also a pretty colorful microphone, with a flat frequency response from 100 to about 1500 Hz, with a big 2-4 dB boost between 2k all the way until about 12k.

This means it will sound very hyped, borderline harsh in the mids and highs. It’s incredibly affordable, and has the potential to sound quite good on various instruments, but lacks some of the refined qualities of the C214.

Top to bottom, the AKG C214 is an excellent large-diaphragm condenser microphone — not just ‘for the price,’ but overall. Many hobbyists looking for their first decent microphone will be perfectly happy with the 214’s performance on multiple sources, including vocals, acoustic guitar, and more.