Access to the best microphone in your price range is paramount for recording rap vocals. They’re the #1 thing that has to sound great; we can forgive a beat ripped from YouTube if the vocals sound crisp and professional. Even though the microphone market is a saturated one, we’ll attempt to narrow it down to microphones all costing $1000 or less. Of course, there isn’t one best mic for rap vocals, but lots of choices for every budget and preference.

The TLM 103 is a large-diaphragm condenser lauded for its reproduction of vocals and acoustic instruments. It has a K 103 capsule that’s based on the K 67/87 found in Neumann’s most celebrated offerings. Neumann is synonymous with quality, and the 103 is no exception.

As a vocal mic, the mesh grille covering the capsule is large enough to minimize plosives on its own, and paired with a pop filter, can really keep aggressive rap vocals clean. It can also handle 138 dB and has extremely low self-noise, so you can record the loudest or quietest voices/instruments with ease. This makes it a fine all-around condenser, in addition to a great rap mic.

The C414 is one of the most famous condensers of all time. It’s up there with Shure SM57 in terms of universal usage in just about every studio in the world. It’s been said that a pair of 414s and 57s can record anything you want.

There are two versions of the C414: the XLII, mentioned here, and the XLS. What sets the XLII apart as a vocal mic is its similarity to the legendary C12. In essence it has a modest presence boost with a capsule designed to reproduce the spatial details of a performance exceptionally well.

Like the TLM 103, a condenser like the C414 is not only one of the best mics for rap vocals around $1000, but for any other instrument you might record.

Shure’s workhorse large-diaphragm condenser is one of the most versatile mics the company makes. It comes with a pad and HPF, as well as 3 different polar patterns (but for rap vocals, you’ll probably stick with cardioid).

One of the unique features it has for recording vocals specifically is a built-in 3-stage pop filter to keep plosives and breaths to a minimum. It has very, very low noise thanks to some of Shure’s own patented technology, which means you can crank the gain on a not-so-great preamp and keep the mic relatively noise-free.

Telefunken’s TF11 is a FET condenser designed to deliver the desirable sonic characteristics of premium Austrian microphones of yesteryear to home studios on a budget. The sound is open and detailed with a lightning-fast transient response which actually makes it perfect for capturing the natural characteristics of a rapid-fire vocal take. The TF11 has a fixed cardioid polar pattern and is right at home as an all-around condenser for vocals and other instruments.

To call the TLM 102 a ‘TLM 103 lite’ would be dismissive of how different these mics actually are. Prices aside, there are several factors that may influence why you’d choose a 102 over a 103 for rap vocals, or vice versa.

The ‘big brother’ 103 has been noted for having richer lows, and airier highs than the 102; on the other hand, the 102 has a more ‘natural’ frequency response. Now, richer lows and airier highs sounds good on paper, but what does that mean for rap vocals?

For one, the extended low-end response around 60 Hz and below on the 103 is going to get filtered out come time to mix. And for airier highs? Well, some people interpret that extra crispiness as harshness. If you’re in that group of users, then the 102 would be a better choice.

The TLM 102 and 103 both handle high SPLs, and they both have pretty low self-noise (though the 102’s is 5 dB higher). If you want a more colorful microphone, then the more expensive 103 might be the better choice. If you’re looking for a great sounding Neumann with a mostly ‘natural’ response, then the 102 can’t be beat.

Best Mic for Rap Vocals Under $500

We’ve taken a peek at several picks for best mic for rap vocals in the $700 – $1000 range. We can go even lower, though, and still find incredible value and professional quality at $500 or under.

The Avantone CV-12 is an affordable take on the iconic AKG C12 tube condenser microphone. It brings that lovely and “expensive” tube sound to studios everywhere. The microphone has nine selectable polar patterns, a -10 dB pad, and an 80 Hz filter. Avantone’s CV-12 kit comes with a custom shockmount, power supply, wooden box for the mic, and a larger aluminum carrying case for the whole kit. If you’re looking for premium tube mic sound at an unbeatable price, this is the mic to have. In particular, tube mics can mellow out harsh rap vocals and make them sound really full right at the source. 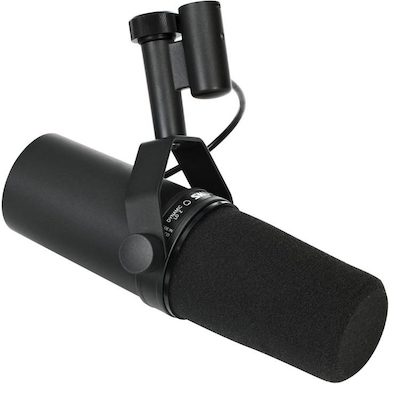 This is the only dynamic mic on the list, as cardioid condensers tend to be the go-to for recording rap vocals and vocals in general. That’s because they’re more sensitive and detailed, so they pick up all the emotive nuance in an amazing vocal performance. However, the SM7B is among the finest vocal mics ever made, finding a home in broadcast, as well as music, studios across the globe.

The SM7B is versatile thanks in part to having onboard EQ. Its dual-band switchable passive EQ offers low cut and presence boost controls. Flat or with the low cut engaged, the SM7B is an amazing mic for male vocals, but a switch of the presence boost makes it an excellent choice for bright sound sources and sibilant vocalists. Of course, you can also use those in the opposite manner to tame bright sources or brighten dark ones.

You’d be hard pressed to find a more robust mic for rap vocals than the SM7B.

The NT2-A is sort of souped-up version of the very popular NT1-A and the similar NT1. It comes with 3 switchable polar patterns, selectable HPF, and selectable pad. Røde designed it to complement modern recording, yet still retain some of that ‘vintage’ smoothness we hear in classic recordings from the ’60s.

Though almost twice as much as the NT1-A, you’re getting many more features and an overall upgraded design.

This is considered the little brother to the C414. Sharing the same capsule, the C214 simply cuts out switchable polar patterns and opts for cardioid-only — not an issue when choosing a vocal mic.

If you want that same up-front and detailed sound in a condenser mic (you probably do for rap vocals), then the 214 is an excellent and affordable choice. Again, too, it’s a very versatile mic for many instruments with the only limitation over the 414 being its fixed polar pattern.

We’re huge fans of the Lewitt stuff here at Produce Like A Pro. They’re a forward-thinking company who combines a lot of modern microphone technology with classic mic design to offer some truly innovative new products. The LCT 440 PURE is one of the finest large diaphragm vocal/instrument condenser mics you can get in this price range. It’s an awesome all-around condenser for the home studio that sounds great on numerous sources, rap vocals included.

Aston Microphones is a relative newcomer to microphone production. Their flagship budget-friendly condenser, Origin, debuted in 2016 and has become widely popular over the past several years. Part of its unique appeal are its looks — rugged brushed metal and a wire mesh grille make it stand out from the competition. But it also sounds nice and has features such as a -10 dB pad and an 80 Hz filter.

Best Mic for Rap Vocals Under $200

This is one of the most feature-rich mics you’ll find sub $300-400. Even though it’s not particularly relevant to recording rap vocals, the 3 polar patterns and 20 dB pad are a nice touch if you plan to record other instruments at any point.

The inexpensive microphone market is one of the fastest growing as more and more people take to home recording, but the AKG P420 is backed by a legacy of tremendous sounding mics.

Here we have an ultra-affordable entry into Lewitt sound with the LCT 240 PRO large diaphragm condenser. It’s a fantastic workhorse condenser that can handle loud instruments like electric guitar and drums but also capture the nuance of a passionate vocal performance. The kit comes with a foam windscreen, mic clip, and carrying case.

Arguably one of Audio-Technica’s most popular mics, the AT2020 is an absolute steal of a mic for rap vocals. You’ll even find some broadcasters/streamers using the AT2020 to get high-quality audio at an amazing price, especially when other other expenses take priority.

The value is unbeatable, and you’d be surprised at the level of quality you can get at such an awesome price. Get two.

The popular MXL 770 is a quality small-diaphragm condenser mic that vocalists gravitate to for its robust low frequency response and clear top end. While currently harder to find than other microphones, the 770 has a reputation as a great budget mic for recording rap vocals.