Audio-Technica is very popular in the project studio. Its superb line of affordable 20 series microphones includes large and small diaphragm condensers, handheld dynamics, and even an X/Y stereo microphone. Amongst them, the priciest offering weighs in at just $250. The real standout, though, is the Audio-Technica AT2020; one of the best known entry-level condensers available.

The AT2020 is a typical workhorse condenser on a project studio budget. A side-address microphone with a 16 mm diameter capsule—just a tad smaller than the average 1-inch capsule found in large diaphragms—doesn’t compromise warmth or body in its sound reproduction. The construction is notably all metal, and the whole microphone weighs in at an impressive 12 ounces. If you look closely beyond the sturdy metal grill, there’s another fine layer of mesh inside to help reduce plosives.

Accessories include a simple mount for your microphone stand and a soft case for storage and travel. At this price, the Audio-Technica AT2020 definitely feels like a premium microphone; there aren’t any noticeable cut-corners that would make you think, “Oh, that’s why it’s only a hundred bucks.” First impressions out of the box are good—it’d be tough to have buyer’s remorse at this stage! 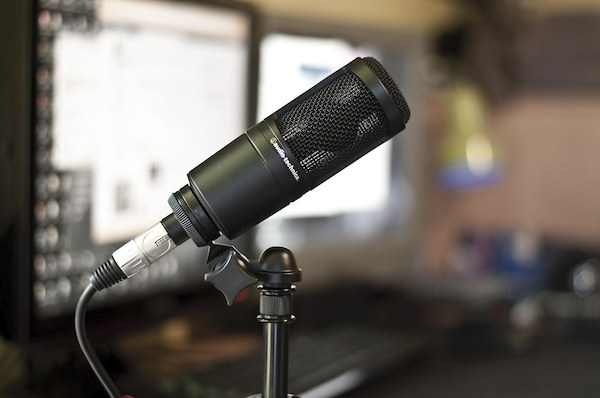 This is where they’re able to slash costs. The Audio-Technica AT2020 is fixed cardioid, meaning it doesn’t have the option to switch polar patterns. That’s totally normal in this price range and shouldn’t be thought of as a major compromise to quality. It also doesn’t have a high-pass filter or a pad; the AT2020 is a plug-and-play, point-and-shoot style mic—no frills.

The Audio-Technica AT2020 reproduces the whole frequency range from 20 to 20,000 Hz, albeit with quite a bit of color for a $99 mic. It has a cut in the lows starting around 50 Hz—most pronounced at 70 Hz—before going all the way to 300 Hz. This is fine for vocals, which Audio-Technica considers the primary use for this microphone. Any of the very low information usually gets filtered out at some point in the signal path.

The mids are pretty flat until they reach a small bump from roughly 1.5 kHz to 3 kHz. At the other end of the spectrum, there’s a presence boost around 5 kHz all the way until 15 kHz where it starts to round off. The biggest boost is between 8 and 9 kHz for some added air—again, great on vocals. Analyzing these specs, the AT2020 has its own sound going on and definitely isn’t a ‘flat’ or ‘natural’ mic.

The AT202 is also sensitive enough that it doesn’t require a massive amount of preamp gain and finds itself average in that department. It can handle a massive 144 dB SPL before distorting, so you can mike up a variety of loud sound sources with ease. One spec that is below average is self-noise, which is rated at 20 dB SPL. Other affordable condensers have gotten this number down to nearly non-existent levels, but the AT2020 isn’t so loud you’re going to have noisy recordings.

The Audio-Technica AT2020 is certainly a workhorse project studio condenser, though somewhat geared for vocal recordings. In that regard it’s actually found itself a popular choice for live streamers and voiceover artists on a budget.

Mainly with how the AT2020 treats the bass, some engineers will either love or hate this mic. The charted response definitely lacks a bit of oomph and body in the lows and low mids. The advantage, of course, is on vocals, especially for those using it on the aforementioned streaming or voiceover type work. These users generally won’t be reaching for corrective EQ, so the built-in frequency curve which flatters vocals is more than adequate.

There’s enough detail and shimmer in the AT2020 that works on acoustic instruments, and many people even love it on an electric guitar cabinet. If you’re shopping for a neutral sounding mic, the Audio-Technica AT2020 isn’t that. However, it is an incredibly high-quality budget mic with a character all its own.