Audio-Technica has a long standing history as one of the most trusted sources for consumer and professional audio equipment. From turntables and cartridges to headphones and microphones, A-T’s product range is as diverse as it is high-quality. For those looking to complete their project studio with some microphones, the 20 series is a fine place to start. Today, we’ll compare the AT2020 vs AT2035. Which is the better mic for your home studio needs?

While already established as an excellent entry-level condenser microphone, the Audio-Technica AT2020 has seen a surge in popularity over the last several years, partly due to the influx of live streaming. At just $99, it’s one of the most affordable large-diaphragm condensers money can buy. Even higher end studios may have at least a pair kicking around; they’re so inexpensive it’s hard to justify not owning a couple!

In terms of specifications, the AT2020 is a straightforward cardioid large-diaphragm condenser. It doesn’t have a pad or a HPF, and you cannot switch polar patterns. It’s simply a point-and-shoot microphone, great for vocals or voiceover, guitar cabinets, acoustic instruments, and more. Really anything you’d want to capture in crisp detail, i.e., using a condenser microphone, you can try the AT2020 on. Results will vary, of course, but that’s the point of experimenting!

The AT2020 covers the entire frequency spectrum from 20 to 20,000 Hz. There’s a significant low-end dip beginning around 50 Hz and extending all the way to 300 Hz. The midrange is fairly flat until a minor boost from approximately 1.5 kHz to 3 kHz. Finally, there’s some lift at 5 kHz all the way until 15 kHz as it begins to drop off; the most pronounced boost is between 8 and 9 kHz. Based on these specs, the AT2020 is definitely a colorful microphone. It seems geared towards vocals and voiceover based on the reduced low end and bump in mids and highs for some extra bite and cut.

Its sensitivity is rated at -37 dB which determines how much preamp gain is required. This rating is adequate, so you won’t find yourself driving your pre unusually hard. Self-noise is rated at 20 dB SPL; that’s about 10 dB quieter than the average bedroom at nighttime. Realistically, the most important aspect here is the charted frequency response. Particularly with how the AT2020 treats the lows, some people will either love or hate this microphone. One thing for certain is that you’ll notice a lack of body compared to a microphone with a flatter low-end response.

When comparing the AT2020 vs AT2035, the latter is a sizable upgrade over the stripped down 2020. For just $149 (compared to $99), the most notable improvements are added features—a high-pass filter at 80 Hz with a 12 dB/octave slope and a -10 dB pad for the loudest sound sources. Like the 2020, the AT2035 is fixed cardioid, so no additional adjustments there.

Like the AT2020, you’ll find the AT2035 useful on most instruments that require a detailed, larger than life condenser sound. However, the AT2035 has a much different frequency response. The low-end is noticeably full and flat with just a moderate dip between 50 and 100 Hz that flattens out near 150 Hz. The midrange is equally flat until 2 kHz, where the mic begins to have a rolling, wavelike set of boosts. It peaks between 10 and 15 kHz with a nice airy top end. The AT2035 is designed to be pretty natural sounding across the board, with a nice, full low end and a very present and shiny high end.

The AT2035 is just slightly more sensitive than the AT2020 with a -33 dB rating. It’s also significantly quieter with 12 dB SPL of self-noise. Again, though, none of these specs are earth shatteringly good or bad, just standard numbers for microphones in this price bracket. Sound is obviously king, and you’d most certainly get a well-rounded, natural response out of the 2035. Whether you’d like that sound is entirely subjective. 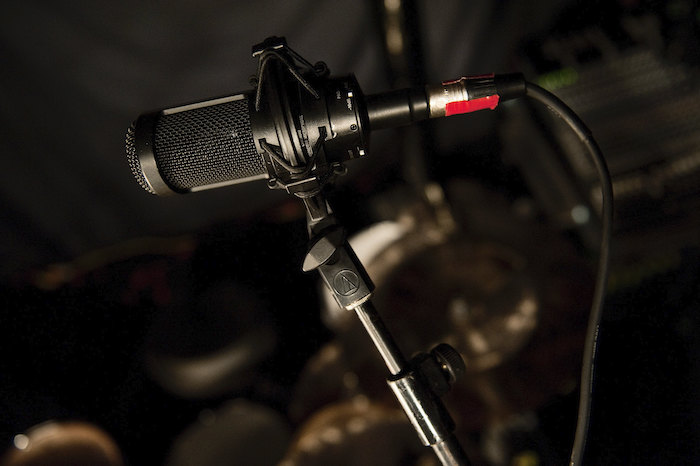 For an extra 50 bucks, our money is on the 2035 any day of the week. As far as build goes, both microphones are virtually identical, but there’s a significant jump in features and sound quality between the AT2020 vs AT2035 that absolutely justifies spending the extra few dollars.

What you’d get with the 2020 is a microphone ‘good enough’ for recording most sources that don’t benefit from having a full bottom end. This limits its versatility, though, because that low cut will definitely color the sound. The 2035 is more natural across the the entire frequency spectrum with a pleasant brightness at the top end that will flatter most sources. You’d end up with a more universal large-diaphragm condenser that also has a HPF and pad if you need it.