Neumann is synonymous with exceptional recording quality. Founded by Georg Neumann in Berlin, Germany in 1928, the company has been making the world’s preeminent microphones for decades. It all started with the CMV 3, or the ‘Neumann Bottle,’ which was the first ever mass-produced condenser microphone. In 1967 the company introduced the venerable U87, which may very well be the most famous condenser ever made, and it’s still in production today. Many engineers dream of owning a ‘real Neumann’ microphone, though cost is a prohibitive factor due to the company’s unwavering commitment to quality. Thankfully, the TLM series is one way to get real Neumann sound at a more affordable price. Today we’ll check out the most popular offerings in the lineup—the TLM 102 vs TLM 103. 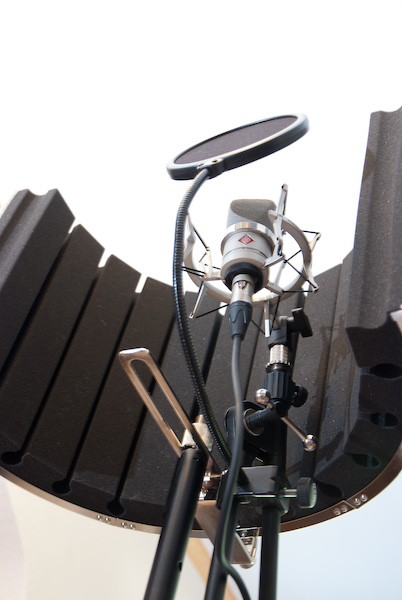 The Neumann TLM 102 is the most accessible large diaphragm condenser that the company makes. Considered an entry-level mic, it’s the perfect way to introduce Neumann quality to your home or project studio. Even at a fraction of the cost of a U87, for example, the TLM 102 screams quality, and is manufactured in Germany like all Neumann microphones.

What makes the TLM 102 affordable is a reduction in size and features. The mic is a no frills, fixed cardioid condenser in a short and stout body with an integrated pop filter. In terms of sound quality, the TLM 102 captures a pretty flat and accurate midrange, with a gentle rise around 6 kHz and an extra boost at 10 kHz for some top-end sheen. Bottom end sounds rich, but controlled; proximity effect is well managed by a bass roll-off.

The TLM 102 is a workhorse condenser for vocals, acoustic instruments, electric guitar, drums, and more. Engineers frequently use it on male and female vocals, and it’s become a favorite budget vocal microphone for rap and other genres. Most people shopping at this price point will not be disappointed with the Neumann TLM 102. If spending $4000 on a microphone just sounds ridiculous, you can enjoy the look, sound, and craftsmanship of a real Neumann for well under $1000 with the TLM 102. 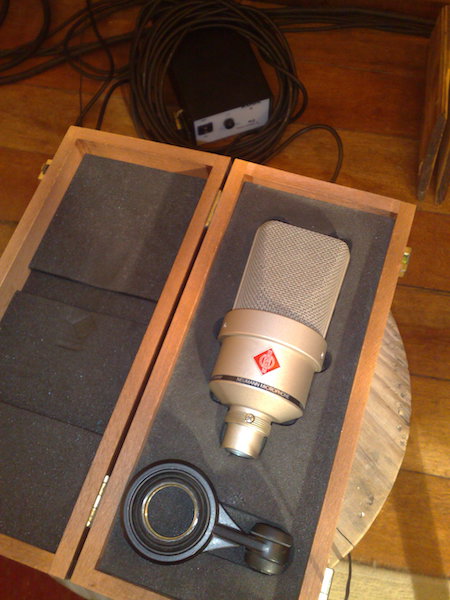 The TLM 103 features a wide presence boost starting at 5 kHz and up to capture and accentuate that hi-fi, glimmering top end we hear in most modern productions. The midrange is flat and natural, while the bottom end is robust; it breathes well thanks to only a very slight roll-off.

Applications for the 103 vary, with most engineers reaching for it on vocals, or on any solo instrument that demands a direct sound to cut through a mix. Large diaphragm condensers get a ton of mileage, so it’s safe to say you can run the 103 on anything.

There are a few factors at play between the TLM 102 vs 103. They’re identical in terms of features (i.e., they have none); as far as size goes, the 103 is the bigger and heavier of the two. Really, though, sound quality should be more of a concern than size.

The 103 generates 7 dB A of self-noise compared to the 102’s 12 dB A. What this means is that the 103 is the quieter of the pair, introducing less unwanted noise into your recordings. Both mics can handle an absurd amount of dB SPL, so one or the other isn’t necessarily a better choice when it comes to recording electric guitar or drums. For what it’s worth, the 102 can take on 144 dB SPL, while the 103 handles a measly 138; I jest, of course, because both of these figures are obscenely, painfully loud (literally). No one in their right mind should be recording anything that loud.

The TLM 102 has a more pronounced low end cut-off than the 103, which is why many users find the 103 to be richer sounding in the lows. It depends on what you plan to record the most, however, because the 103’s fuller bottom is going to end up EQ’ed out on a vocal, for instance. The 102 also has a narrower top-end boost compared to the 103 and is generally considered the more ‘natural’ sounding of the two. Its high end roll-off begins its descent much earlier than the 103, so the 103 is considered the more airy and present microphone. On the 103, the hyped high end can be pleasant and desirable to some, and harsh and clinical to others.

Unfortunately there’s no definitive end to the TLM 102 vs 103 debate. Like everything in pro audio, it all comes down to personal preference! We can paint with broad strokes and label the 102 as more natural sounding, and the 103 as more colorful. Still, these characterizations are dependent on additional factors like sound source, the sound of your room, and so much more. If possible, listen to both on as many sources as you can to help inform your decision!