How to Use Arpeggiators: 5 Tips to Instantly Enhance Melody & Rhythm

An arpeggiator is a common synthesizer feature. It’s an easy way to quickly add interest and movement to a chord progression. We’ll explore what an arpeggiator is, as well as offer some tips on using them in your own music!

Have you ever heard a pulsing synthesizer part in a song that’s simultaneously melodic and rhythmic? You can pick out the fact that the player is cycling through different notes; and each note seems to be locked to the tempo. There’s a good chance that melody came from an arpeggiator!

What is an arpeggio?

“Arpeggio” is a term from music theory. It’s when someone plays the notes in a chord one at a time instead of all at once. On acoustic guitar, for example, a player can hold a chord on the fretboard and pick through the notes individually, in any pattern they’d like. For the shredders out there, sweep picking is a way to quickly and fluidly play an arpeggio. Of course, the term doesn’t only apply to the guitar—it’s just an easy example to illustrate. 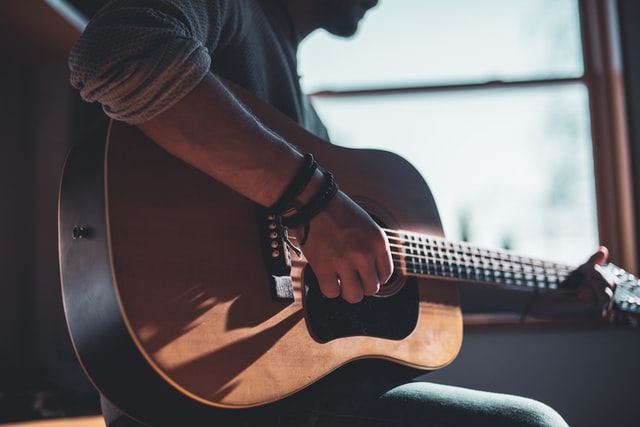 To use synthesizer terms, strumming a chord on guitar is polyphonic. That is, multiple notes are heard simultaneously—you can also call this harmony, or harmonic. An arpeggio, on the other hand, is monophonic. You hear the notes of a chord one at a time—you can call this melody, or melodic.

Arpeggios are a very common way to add rhythmic and melodic complexity to a chord progression. Instead of just strumming or holding the chords, you can rearrange the note order and play them in any pattern you can imagine.

What is an arpeggiator?

An arpeggiator is a synthesizer function, or it can also be a standalone plugin. Arpeggiators let you input the notes of a chord, and it will play them back individually. From there, you can alter the rhythm and the order of the notes to create different patterns. The earliest arpeggiators triggered simple triads.

What does it do?

Well, it’s sort of up to you! Today’s arpeggiators go well beyond triads, and you can trigger pretty much any chord you can dream up. Just input the notes and let the arpeggiator get to work; you can determine the order of the notes and the rhythm to make sure it fits your production in a desirable way.

Sequencer vs. Arpeggiator: Understanding the Difference

An arpeggiator is a sequencer. The difference is that a sequencer gives you a lot more control over which notes are played and where they land. Arpeggiators are more limited, but there’s a good reason for that. An arpeggiator is supposed to be a tool for quickly adding exciting movement to a chord progression; a sequencer let’s you create much more complex patterns.

How to Use an Arpeggiator

Arpeggiators vary slightly from one to the other, but the basic principles tend to be static. Let’s say you’re using an arpeggiator plugin. The first step is to load up an instance of the plugin on a MIDI track with some notes programmed.

The two most important parameters are rate and note order. Rate determines how fast the arpeggio will be. Note order let’s you decide whether to ascend or descend the chord, or maybe a mixture of both. At this point, most arpeggiators let you change the volume of each note as well as its rhythm. Some have a simple built-in step sequencer, or grid, where you can choose where notes are played in addition to the volume of each note.

The easiest way to figure out an arpeggiator is to just experiment with it in your DAW. Luckily they aren’t too complicated, so you can get creative right away.

5 Tips to Enhance Your Tracks Using an Arpeggiator

An arpeggiator is just another creative tool we have at our disposal. Here are some practical ways to incorporate arps in your music.

1. Turn every chord into an arpeggio

This is what we call keeping it simple. Just turn the thing on, and let it work its magic. If it seems like a no-brainer, consider this tip a reminder that it’s sometimes best to not overthink it.

Try arpeggiating all the chords in a progression and see how that transforms the melody and rhythm of the sequence.

Some synthesizer arpeggiators let you transpose notes up and down. This is a really cool way to make these big, sweeping arpeggios that cycle through octaves—a perfect way to add some serious movement to a progression.

Arpeggiators are a unique way to set up a countermelody. The idea here to keep the arpeggiator settings very clean and simple so that they don’t get in the way of the main melody. Pick out a triad and keep the rhythm sparse; see how it interacts with the primary melody for some tasteful movement.

An arpeggiator doesn’t have to be the star of the show. In fact, they’re an ideal way to quietly enhance what you already have composed. Let’s say you have a MIDI chord progression locked in—duplicate that track, perhaps drop a few notes to simplify it further, choose an innocuous piano or synth patch, and load an arpeggiator. Now mix this track underneath the main progression to add a bit of depth and texture.

5. Arpeggiator on percussion? You bet!

Enough with the chord progressions, right? Arpeggiators can be great on a background percussion track for some additional rhythmic accents and groove. Perhaps start by taking the approach we mentioned in 4., but on a drum track instead of a chord progression. Duplicate and simplify the existing part, in comes the arpeggiator to taste, and mix that underneath the main drums.

Okay, no more lecturing! Getting your hands dirty with these things is the best way to figure out what they’re all about. Here are a few arpeggiator plugins for you to try. 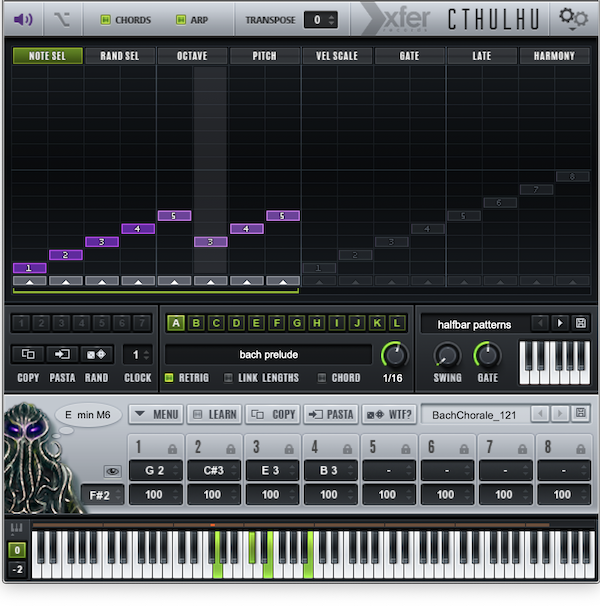 Cthulhu is a chord player first, but it also has a powerful arpeggiator built in. For an all-in-one solution, Cthulhu can generate full chords in various forms and inversions from single-note MIDI inputs, and then arpeggiate them to your heart’s content. For $39 it’s a bargain, or you can demo the plugin for 15 minutes upon downloading. 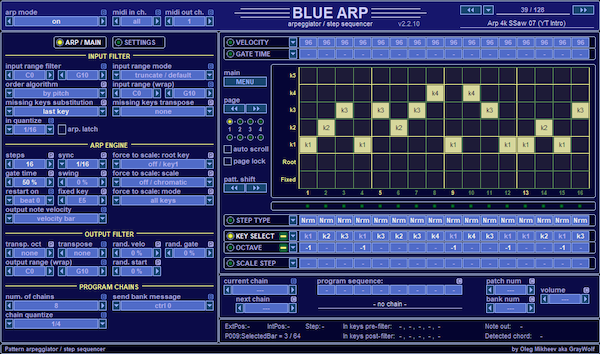 BlueARP is a great free arpeggiator VST plugin for Mac and Windows. The developer took all of his favorite features from various hardware arpeggiators and combined them into this awesome free plugin. If it’s your first time using an arpeggiator, free is about as good as it gets! 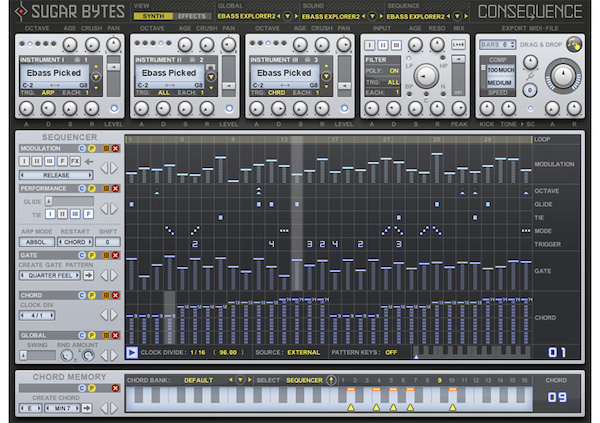 Consequence is a deep and feature-rich arpeggiator and chord sequencer, but is easy enough to use. You can come up with some really complex and unique patterns and sounds using this plugin. It’s the priciest of the three listed here at $119, but it’s also the most in-depth.