Even though we only have 12 notes, there are hundreds of possible chord progressions. This can be overwhelming, especially when we’re not yet comfortable finding chords that go together right away.

Luckily, the majority of progressions tend to follow established patterns that songwriters and listeners know and love. Understanding these patterns is the key to expanding your chord knowledge and writing progressions that ‘work’ more easily.

What Is a Chord Progression?

Chord progressions are simply a series of 2 or more chords played in a piece of music. They form the backbone and harmony of a full arrangement, or sometimes stand alone. For singer-songwriters, a chord progression played on an acoustic guitar or piano with a vocal melody on top is the whole song!

Individually, chords don’t ‘say’ a whole lot. They can very simply be major, or minor, or diminished…they can convey a vague tonality and emotion. But sequencing chords together lets us express more complex emotions and ideas.

Using a solid progression as a foundation, you can more easily build a complete song around it. Lead lines and melodies naturally reveal themselves depending on the chords you’ve put together.

If you’re wondering how to write a song and feel overwhelmed, finding chords that go together is a great place to start! So how do we do that?

Chords in a progression sound good because they’re in the same key. They’re made up of a combination of notes from the given key, or scale. We’ll dive into some fundamental music theory using the key of C Major — all white keys on a piano.

There are 7 notes in any given scale:

And there are 7 chords made using only the notes from the scale:

These are the chords available in the key of C Major. You can create any progression you want using any combination of these 7 chords. Plus, this pattern — 3 major chords/3 minor chords/1 diminished chord — is the same for all 12 major keys.

You’ll sometimes hear these called diatonic chords, which means they belong to the key/scale. Non-diatonic chords are borrowed from other keys, but we won’t get into that just yet!

Again, every major scale follows this pattern. So using Roman numerals instead of chord names means you can write a progression and transpose it to any key you’d like!

As with major, you can apply this pattern to any minor key!

Getting to Know Popular Chord Progressions

With fundamental music theory squared away, we can talk about some of the most-used progressions in music. These are tried-and-true examples of chords that sound great together in any key.

However, as with all things musical, let your ears be your guide. Tested progressions are a good place to start, but are not ‘rules’ you have to play by. Throwing in a weird chord here or there is what makes music unique and fun to listen to. If musicians never broke any rules, then everything would sound the same!

The three-chord wonder. This is inarguably one of the most famous chord progressions of all time. It’s been all over rock music throughout the ages, and forms the backbone of 12-bar blues. And that’s because it’s simple, and it works!

Don’t mistake its simplicity for being uninteresting, though. The intervals between the I and the IV chords are big enough to create a musical journey. Finally, bringing it home from V to I satisfyingly resolves the progression. In C Major, it would look like this:

It’s basic, for certain, but what you do with the rhythm can put a fresh spin on this time-tested chord progression.

You might call this one the ‘four chords that made a million (dollars)’! This insanely successful chord progression has been all over the Billboard charts in practically every genre.

It has three very useful variations as well:

It’s so popular, in fact, that Wikipedia has dedicated an entire article to famous songs that have used it. To make the cut, each of the literally hundreds of songs on the list contains ‘multiple, repeated uses of the I–V–vi–IV progression.’

Some hits where you’ve heard this chord progression include “Africa”- Toto, “Poker Face” – Lady Gaga, “I Want You to Want Me” – Cheap Trick, “Someone Like You” – Adele, and “Zombie” – The Cranberries, to name a few!

This chord progression is a jazz staple in the same way I – IV – V is a blues/rock standard. The ii chord is a great setup for the tension-making V — and when it resolves to the I, everybody’s happy!

Beyond jazz standards, you’ll find this sequence in R&B, pop, rock, and country. Most chord progressions are practically universal, so try them all, regardless of what genre you prefer.

Here we have a widely used minor key progression, famously heard on R.E.M.’s “Losing My Religion.” Another popular variant — i – VII – VI – i — can be heard on both Bob Dylan’s “All Along the Watchtower” and Jimi Hendrix’s cover.

If you’re looking to add a brooding and somber tone to your music, experimenting with minor key chord progressions is the way to go.

Pachelbel’s “Canon in D Major” introduced this progression, though it went mostly unused in the centuries after his death. Interestingly, the progression was sort of ‘rediscovered’ in the ’70s, where artists started to use it in pop songs.

It looks complex, but it’s really just an extended version of I – IV – V. It has that same feel, with some added movement and depth. This is a great one to play with if you want to make I – IV – V your own.

How to Write Your Own Chord Progressions

Now that we’ve established the principles of chord progression and music theory, we can break down the steps of writing your own!

Beforehand, a good exercise I’d recommend is learning a song you like that utilizes one of these popular progressions. Pick a song from the hundreds of I – V – vi – IV tracks out there, for instance. Get the chord changes down on your instrument of choice so you can familiarize yourself with how they work in practice.

Of course, you can always just jump straight into writing! 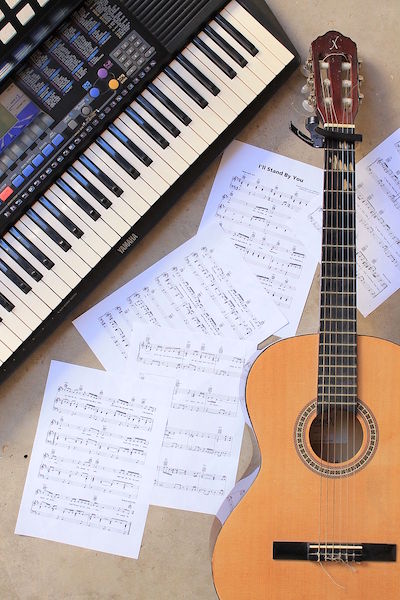 A guitar or keyboard works best. You need something you can easily piece together chords with, which just means you need to be able to play 2+ notes at the same time.

Because the ultimate goal is writing the foundation of a song, you should pick an instrument suited to that end. In other words, if you’re making an EDM track, it wouldn’t make sense to write chord progressions on an acoustic guitar.

You could transfer it to a synthesizer later, sure, but the sooner you establish a sound, the more inspired you’ll be to write.

What’s your I/i chord? That will determine the starting point and key. Whether you go major or minor will depend on what you intend to write!

Will you play it safe and pivot from I to IV? Or will you mix it up with something totally wild? Remember, anything you play will be in key if you’re using the 7 chords for the given key.

This is where you should take some time to experiment!

Chords without rhythm are just notes! It’s time to develop a groove between the first two chords in your progression. Now is also a good time to figure out whether you’re strumming, plucking, arpeggiating, etc. the chords as well.

Play through the remaining chords in your key and find one that you like. What sounds best is totally subjective, and luckily you’re in control of your chord progression!

Three chords are more than enough to write a song, but you may want to get a bit more involved with as many chords as you’d like!

Get Weird with It

If diatonic chords aren’t doing it for you, bring in something from another key. This is a normal practice that every songwriter employs at some point in the process. In fact, very few artists actively sit down with a chord chart and map out all their progressions!

First and foremost, let your ears guide you through creating chord progressions. You can reference music theory and popular progressions at any point if you get stuck, but don’t hesitate to do your own thing.

The information presented here is intended to give beginning/aspiring songwriters a bit of a jumpstart. Removing some of the mystique behind songs we know and love by analyzing their chord progressions is a useful and inspiring exercise.

Ultimately, let your ears, hands, and personal taste dictate the progressions you write. Chords that go together are whichever you put together!