A great chord progression is one of many factors that contributes to a quality piece of music. It forms a template, or the backbone, from which the rest of the song can be built. But finding chords that go together can be a tedious process, even if you have lots of experience and a knowledge of music theory. That’s where plugins like a chord generator VST come in handy to help you piece the puzzle together.

A chord progression generator isn’t a crutch or a ‘cheat code.’ It’s a genuinely useful tool if you ever find yourself in a songwriting rut. Plus, it can also supplement your understanding of theory over an extended period of time. But most importantly, chord generator plugins can streamline your workflow and help you quickly unlock your creativity.

Nothing the plugin comes up with is set in stone. You can always tweak and edit the MIDI it suggests to put your own unique spin on it. Again, it should be thought of as just another modern songwriting/production convenience; it’s not a full-on replacement for human ingenuity. 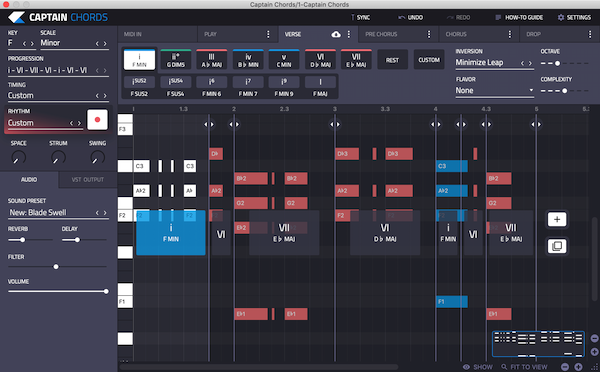 Captain Chords by Mixed in Key is part of the company’s popular Captain Plugins series. It’s extremely flexible, both a fantastic plugin for composing chord progressions as well as honing your theory chops. One unique feature its ability to identify anything you play on a MIDI controller.

It also comes with over 100 rhythms you can apply to the chords so a song idea can quickly take shape. There’s a Strum option that will play back notes more like a guitar than a piano, and 249 built-in sounds to choose, including leads, basslines, guitars, and more. It’s easily one of the best chord generator VST plugins around in terms of intuitiveness and features. 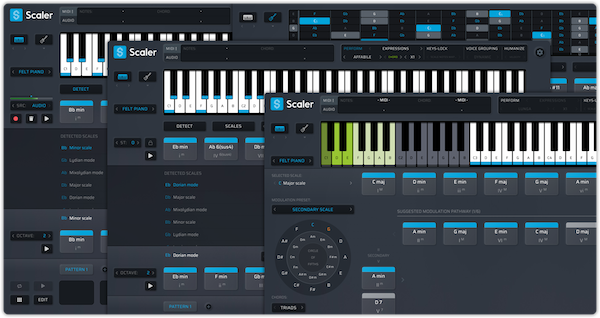 Scaler will detect the key/scale of whatever music you have in your DAW, and then suggest chords that fit. Additionally, there’s a bank of 2,000 scales and modes, including genre and artist presets. Of course, Scaler comes with an extensive set of editing and analysis tools to customize and arrange your chord progressions so that they’re completely original to your production.

InstaChord is designed with speed in mind. This chord generator VST will help you play chords and build progressions on-the-fly.

InstaChord offers all the common chords and inversions to choose from, and you can select a key and generate a progression in a matter of seconds. It also has two different voicing modes—keyboard and guitar, plus 40 preset progressions to get the creative juices flowing. 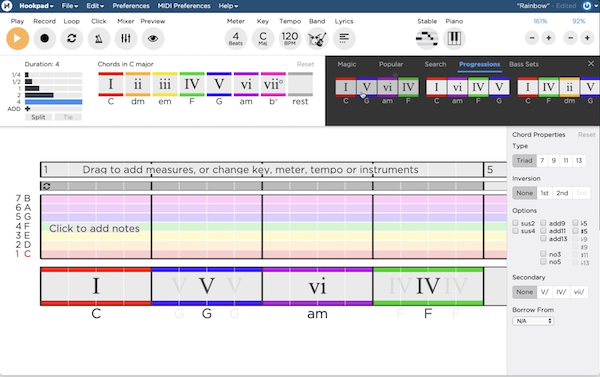 Hookpad is a chord progression, melody, and music theory toolkit. It simplifies exploring different musical ideas in an interface that Hook Theory calls a ‘sketchpad.’

Hookpad helps you create chord progressions complete with complementary melodies and even drum tracks. You can choose from dozens of styles and genres, and the software plugs in the instrumentation for you. Its standalone desktop interface means you can work outside of your DAW and then drag and drop MIDI into it once you’ve settled on an arrangement; that also means there’s nothing to download.

Hookpad also has built-in music theory, melody guides, and intelligent chord suggestions to help you write chords and melodies with the theoretical knowledge to support your creative choices. 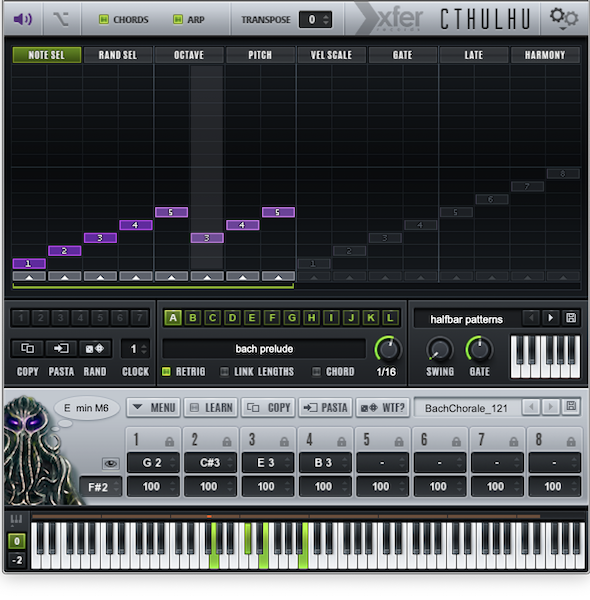 Cthulhu is both a chord and arp module. It requires routing to a MIDI instrument to function and generates chords from pressing a single note. From there, you have the arp module to manipulate and transform the chords in tons of rhythmic ways.

The plugin comes with 150 chord presets as well, which means you can select a style such as ‘Bach Prelude,’ then hit single notes on your MIDI controller that will be turned into complete chords in the right key. 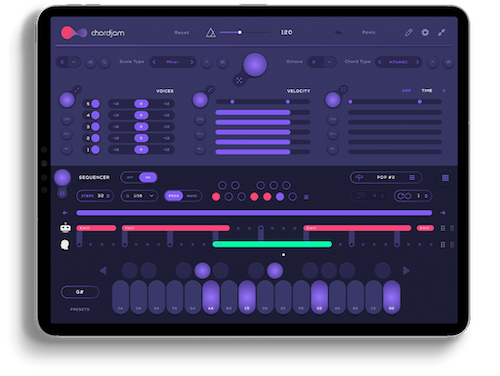 Chordjam by Audiomodern takes a unique approach to chord generation than other similar software and plugins. It relies on user-generated randomization for an expressive experience that’s virtually limitless in its creativity and scope. Chordjam is available in all major plugin formats for your DAW, and a mobile iOS version is available as well.

Chordprism is a helpful chord generator and melody writer. You can play one note on your MIDI controller and the plugin will make a chord out of it that’s in the chosen key. Select from various chord types as well as inversions to get the flavor your song calls for. The Smart Scale functionality helps users write in-key melodies without changing their hand position, so you don’t need to be a keyboard expert to write incredible music. 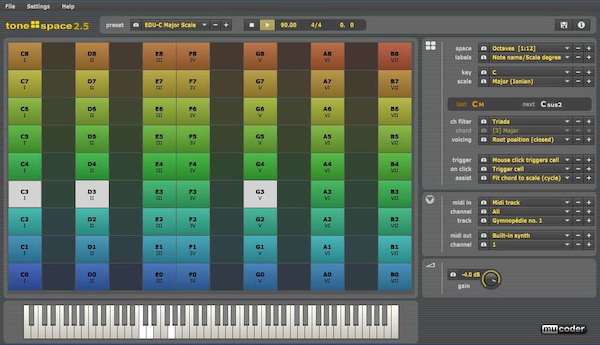 Tonespace is an excellent free chord generator VST. Its unique interface displays chords and scales on a grid to help understand the structure and the relationship between different notes. It accepts simple, single-note MIDI input to generate full chords, and runs as either a VST/AU plugin or a standalone application. 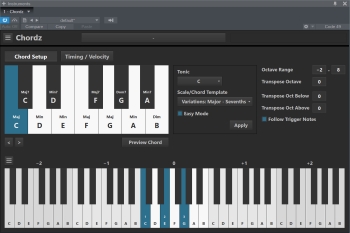 Chordz is another great freebie, but it’s limited to Windows only. Like any chord generator worth its salt, Chordz takes single-note input and builds chords for you automatically. Each chord may consist of any number of notes. It lets you play complicated chord progressions with one finger, using a MIDI keyboard or a drum pad, or you can also trigger chords from single notes added in your DAW’s piano roll.

Ripchord is a free MIDI plugin for creating and remixing chord progressions. You can create custom chord presets from scratch, load community presets or expansion packs, and also import any MIDI file that contains chords and Ripchord will automatically create a preset from it.

Once you have a preset loaded, you can quickly and easily compose progressions by playing single notes to trigger full chords. Bam. 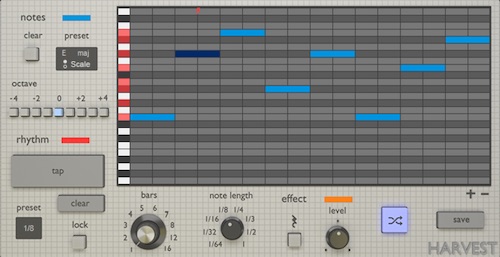 Harvest Mini is an exciting and easy-to-use MIDI loop generating plugin. It can create unlimited melodies, chord progressions, and drum loops to keep you creatively dialed in at all time — even if you feel like you’re in a slump. You can start by choosing a scale and then selecting a preset rhythm, and then using the regenerate button to create endless variations. 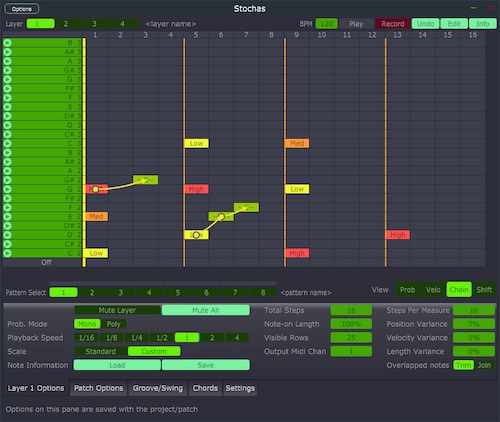 Stochas is an open-source step sequencer. It doesn’t generate any sound of its own but can be used to sequence virtual or hardware instruments. What’s so cool about Stochas is that it isn’t just suitable for drums — it works great as a melodic generator as well. Previously, this was commercial software, so it’s awesome to have it currently open-source.

Chordator is one of the simplest chord generator VSTs there is. It’s as basic as loading an instance and pressing a single key from your virtual instrument to turn that single press into a full chord. If you’re looking for something barebones just for a creative spark, this is an easy way to do it. 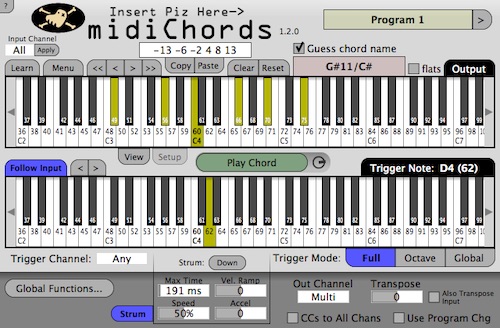 midiChords strives to be one of the best open-source MIDI chord mapping plugins around. This is a slightly less intuitive plugin than the others, so it really takes some time to experiment and dig into it to fully understand. Once you do, however, it becomes a powerful tool for chord generation.

ChordworX is a Windows-only generator that takes a single note and generates up to seven notes for complete chords and arpeggios. It comes loaded with 98 existing chords and gives users the option to add their own. 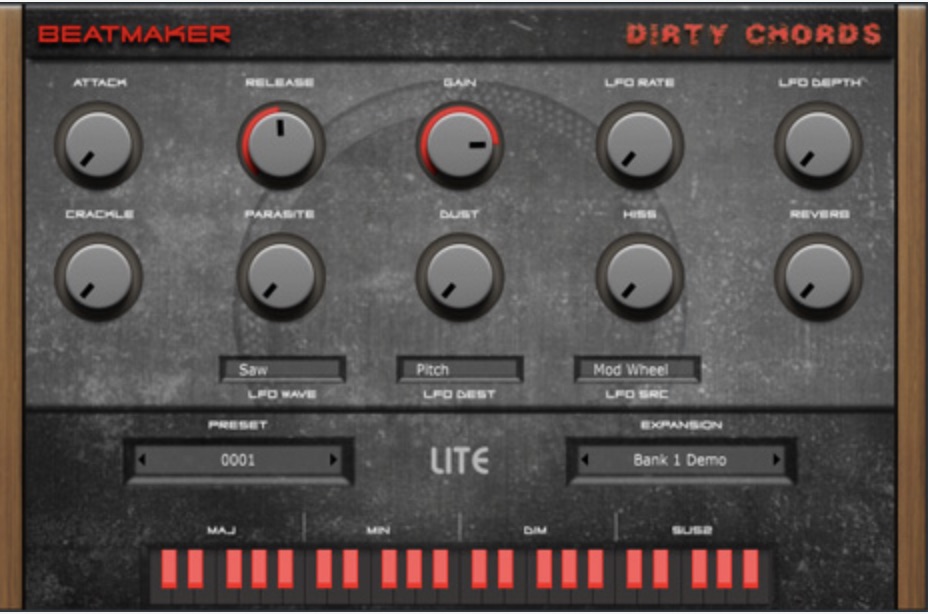 Dirty Chords is somewhat unique in that it comes with 10 chord presets, four noise generators, and built-in effects. It’s sort of an all-in-one solution to synthesis and chord generation, triggering chords from single key inputs. The fact that it generates its own sound is a nice touch — very unique instrument.

For anybody who wants to make music but finds writing chord progressions a frustrating task, chord generator VSTs are where it’s at. Even if you’re an experienced musician, chord generators can provide a brand new source of fast, intuitive inspiration.