The circle of fifths is a roadmap for musicians. It shows the relationship between all 12 notes of the chromatic scale, and helps us navigate key signatures with ease.

A fundamental part of any beginner to intermediate theory lesson, the circle of fifths only asks that you understand its structure. From there, you can breeze through scales and chord changes in any key you’d like…

The Circle of Fifths Unlocked

Historically, the circle loosely traces all the way back to Greek philosopher Pythagoras in 6th century B.C. Unfortunately, there’s no hard evidence that he did in fact invent it. However, he is credited with inventing a tuning system based on fifths. Pythagoras was on to something, maybe, but it wasn’t until the 1600s that the circle of fifths as we know it came to be.

In 1670, Ukrainian composer and music theorist Nikolay Diletsky published a treatise called Grammatika. It was all about music theory, and its purpose was to teach Russian musicians how to write Western-style compositions. The first of its kind, Grammatika is also the first place the circle of fifths was printed.

What does the circle show? 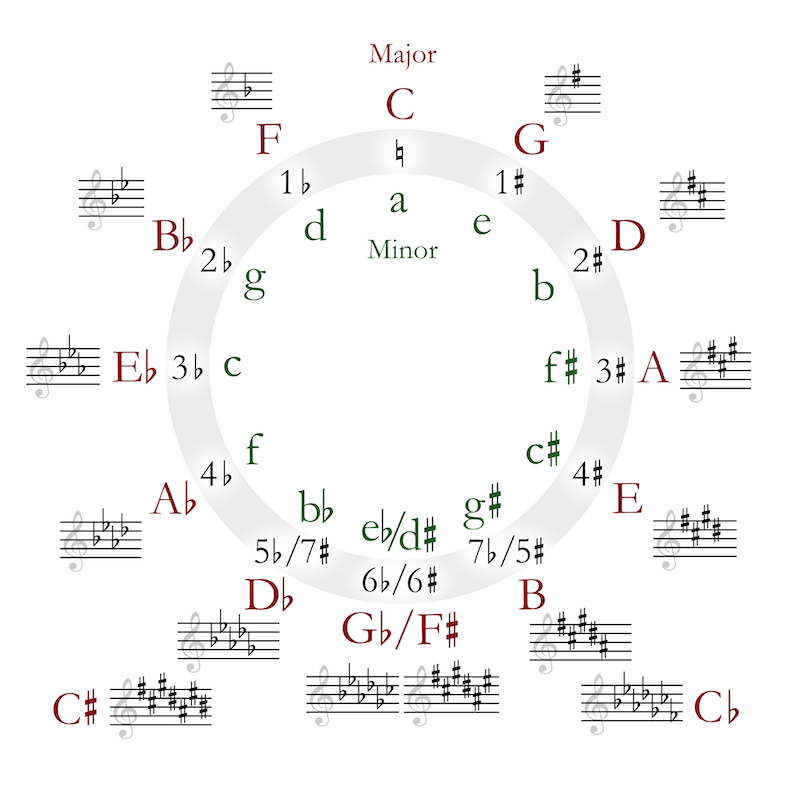 It lays out all 12 major keys starting with C at the top. In C major, all the notes are natural, meaning there are no accidentals (sharp or flat notes). Moving clockwise around the circle, every step to a new key is an interval of a fifth.

If you move counter-clockwise around the circle, you will find that the distance between notes is a fourth. (You’ll less likely, but sometimes, hear the term ‘circle of fourths’ used as well.)

The first fifth is from C to G major. The key of G major has one accidental, or one sharp note (F#). The next fifth — from G to D major — introduces another accidental (C#). In D major, both F and C are sharp. Each step around the circle adds an additional sharp note until you reach C# major, in which all 7 notes are sharp!

Likewise traveling counter-clockwise around the circle from C major introduces one flat note per key, per interval, until you reach Cb major — all flat notes.

First and foremost, it’s a tool. It won’t necessarily make you more creative, but it can help you in a variety of practical ways we sometimes overlook.

The circle of fifths can help you easily identify the chords in a given key as long as you’ve chosen a tonic (the I chord/key you’re in). Let’s use the following progression as an example:

This is easily one of the most famous chord progressions in Western music — guaranteed, you’ve heard it all over the place. Now let’s use the key of C major as an example again. C major contains the following chords:

And in Roman numerals:

Finding the Relative Minor of Any Major Key

If the circle you’re referencing doesn’t label it outright, you can still use it to identify the relative minor of any major key. All you have to do is move 90º, or 3 steps to the right, of your major key to find its relative minor.

Starting on F, for example, 3 steps to the right puts you at D. D is the relative minor of F major.

Knowing All of the Sharps/Flats in Any Key

Trying to memorize key signatures for all 12 keys is tough to do. Luckily, the circle of fifths can help with that.

We mentioned earlier that moving clockwise around the circle adds one sharp note per step. Moving counter-clockwise, we add one flat note per step. But how do we know which sharp note to add? Enter, the order of sharps and flats.

As if music theory wasn’t already complicated enough, there’s a particular order in which sharp and flat notes are added to key signatures as the circle of fifths represents.

How do we make sense of this? Starting at C major, moving one degree clockwise, lands us on G major. G major has one sharp note, which, accordingly to the order of sharps, is F#. D major has two sharps: F# and C#. A major has three sharps: F#, C#, and G#. And so on…

Moving counter-clockwise, we refer to the order of flats in the exact same way. F major has one flat note. If we know our order of flats, we know that note is Bb.

And that’s the circle of fifths!

If you’re like me, you’re probably more confused now than before! Really, though, the circle of fifths is best understood by studying it. The patterns it illustrates make a whole lot more sense when you’ve had a look! 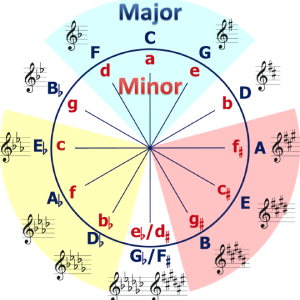