The Arturia KeyStep is a riff on the portable MIDI controller, combining classic keyboard functionality with polyphonic step sequencing. It can control both digital and analogue gear thanks to a variety of I/O, and the 32-key layout offers a bit more range than the competition.

The KeyStep premise started with the keyboard itself. Arturia came up with their own ‘slim key’  design and action; it balances the best features of compact mini controllers (size/portability) with the musicality of full-sized keys. The size, velocity, and aftertouch of the Slimkey all lend themselves to playability not found in other portable controllers.

Arturia also threw in a polyphonic step-sequencer with 8 programmable memories, recallable by turning a knob. From there, users can choose gate times and swing settings to quickly change the feel of the sequence. With that there’s also the ability to record, overdub, and transpose sequences in real time and still play the keyboard live. Finally, they’ve added a flexible arpeggiator and chord play mode for fast and fun music-making.

While the features above are competitive enough to be a contender in the mini MIDI controller market, Arturia added a range of connectivity options for professional, performance usage.

These connections mean Arturia KeyStep can control any piece of digital or analogue gear. In reality, it’s more than just a backpack controller. It’s supposed to merge into whatever setup you have for additional flexibility and control over your workflow. 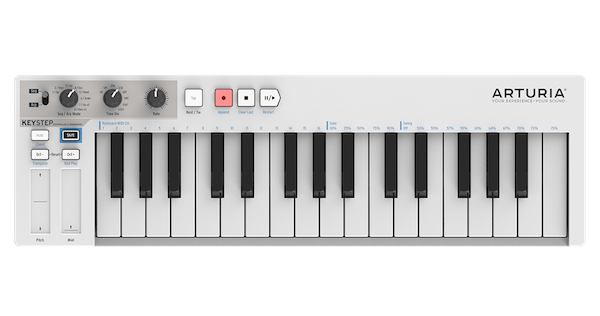 The Arturia KeyStep is a great controller. The Slimkey design is unique and intuitive, and the connectivity is unmatched if you intend to control any analogue synths like modular units. KeyStep’s build quality is on-par for its price as well.

Some gripes that users note is firstly the inclusion of mod and pitch ribbons instead of the traditional wheels. It’s Arturia’s way of quite literally ‘reinventing the wheel,’ perhaps aiming to reduce the height of the keyboard. They take some getting used to, however, and left anywhere above 0, there’s no physical indication of them.

Another potential complaint is actually the size of the KeyStep itself. Adding another octave of keys means the unit is longer than a 25-key controller like an Akai MPK Mini. If you plan to throw it in a backpack to take on the go, you might find that it sticks out the top.

Ultimately, these are minor inconveniences at most. The Arturia KeyStep’s existence in the portable MIDI controller world is completely justified.