Dancing to Distinction: “Blue Monday” and the Reinvented Self of New Order

On May 17, 1980, Bernard Sumner, Peter Hook and Stephen Morris all stood, on the eve of their first American tour, poised on the edge of international success. Their band, Joy Division, was about to release what would be a best-selling single (“Love Will Tear Us Apart”) and a critically acclaimed album (Closer). But by morning, it was all over. Chris Bohm reflected in NME a year later, “Ian Curtis’s death on May 18, 1980 didn’t so much bring Joy Division’s journey to the heart of darkness to an abrupt halt, as freeze it for all eternity at the brink of discovery.” While still mourning the loss of a bandmate and friend, Sumner, Hook and Morris were left to decide what to do next. Rather than replace Curtis and carry on, the trio decided to create something new. Renamed as New Order, with Sumner on vocals and a new member, Gillian Gilbert, on keyboard and guitar, they embarked upon a separate journey, one that managed to retain the inspirations and their history, while creating something distinct and new.

On March 7, 1983, New Order released the single “Blue Monday.” In addition to its massive commercial success, charting in the top 10 in several different countries, the single established New Order’s reimagined voice, distinct from the raw emotions and haunting melodies of Joy Division, and launching the world of dance music into a whole new era. As John Bush declared: “‘Blue Monday’ cemented New Order’s transition from post-punk to alternative dance with vivid sequencers and a set of distant, chilling lyrics by Bernard Sumner” 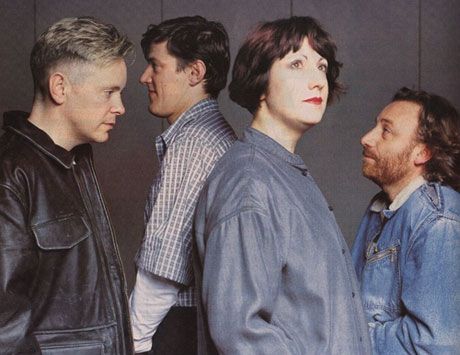 At first, in the time between Curtis’ death, and “Blue Monday”, New Order struggled to find their identity as a band. Their first single” (“Ceremony” with “In a Lonely Place”) were tracks they had written with Curtis before his passing, and their first album (Movement, 1981) followed in the same vein of dark, haunting ytacks, as their work in Joy Division. What “Blue Monday” offered, instead, was a startling break away from that emotionality and into the mechanized sound of drum machines and synthesizers. As Sumner reflected in 2015: “I think ‘Love Will Tear Us Apart’ connects with people because of the emotional content within the song, and I think ‘Blue Monday’ connects with people because of the startling lack of emotional content within the song. It’s kind of contradictory, really.”

While the sonic shift seemed to be a drastic change, there are several lines of influence that can be drawn between the track and the band’s earlier work. The impact of a band like Kraftwerk on New Order should come as no surprise; however, it was actually Ian Curtis who introduced the electronic music pioneers to his bandmates. As Hook explained:

“My earliest memory of Kraftwerk was being given an LP by Ian Curtis. He gave me ‘Autobahn’ and then later ‘Trans Europe Express’. I was absolutely mesmerised by both. Ian suggested that every time Joy Division go on stage, we should do so to ‘Trans Europe Express’. We did that from our first show, until nearly our last […] Joy Division were very tied to Kraftwerk, but it wasn’t until we got to New Order and were able to afford the toys that our primary source of inspiration became, ‘Let’s rip off Kraftwerk’. Their music was beguilingly simple, but impossible to replicate.” 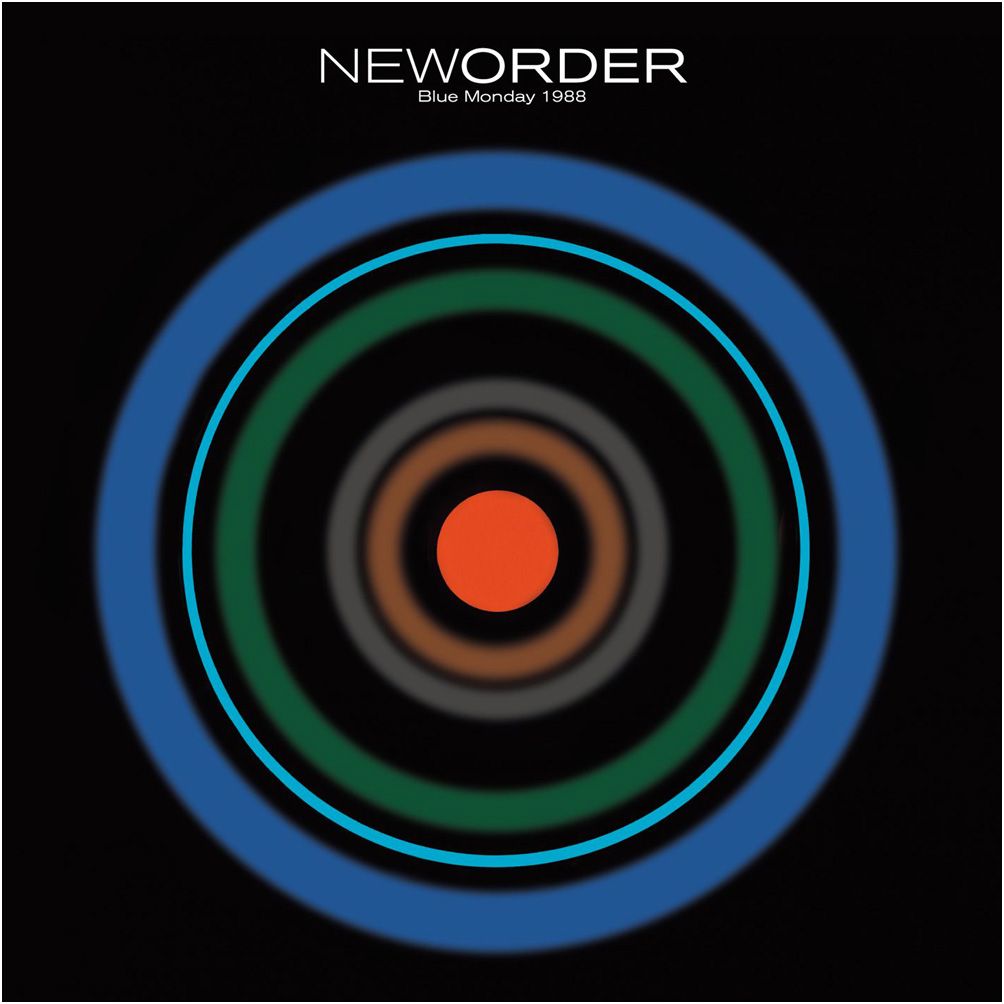 Other influences on the song include the pulsating bass line of Donna Summer’s “Our Love” and the rhythm of “Dirty Talk” by Klein & M.B.O.. Hook’s bassline even pulls its melody from the legendary Italian film composer Ennio Morricone and his soundtrack to the Clint Eastwood movie, “For a Few Dollars More”

Bringing all of these influences together was the band’s comfort with the recording studio and production technology, which they had picked up during their time working on their first album. Some of the track’s brilliance comes from carefully calculated creative choices, while others were a little more unexpected. The timing of the synthesizer, for example, came out of a mistake that Gilbert had made when programming the part. She explained:

“The synthesizer melody is slightly out of sync with the rhythm, […] This was an accident. It was my job to program the entire song from beginning to end, which had to be done manually, by inputting every note. I had the sequence all written down on loads of A4 paper Sellotaped together the length of the recording studio, like a huge knitting pattern. But I accidentally left a note out, which skewed the melody.” 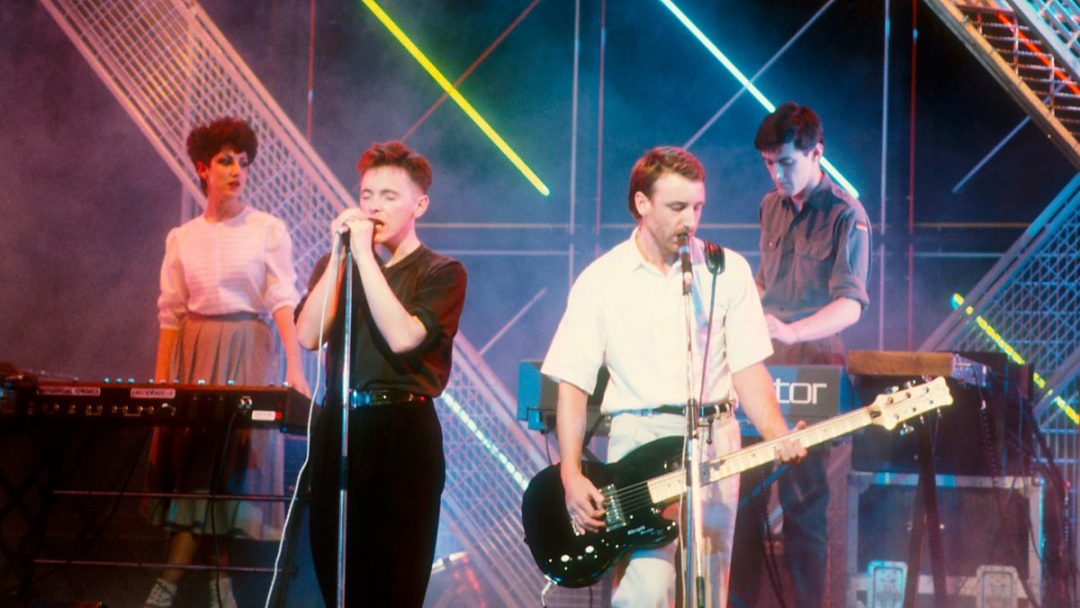 As Gilbert points out, this was a time of manual programming and emerging technology. Sumner also reflected on this exciting time, saying: I remember just being turned on by the latest technology that was becoming available. It was pre-computers, pre-MIDI, and I’d built this sequencer from an electronics kit. We programmed everything in step-time using binary code digital readouts. It was… complicated. […] Rob [Gretton, New Order manager] thought it was witchcraft. He really did! That sounds weird now in the age of the internet, but he really thought it worked by magic.”

In addition to the “magic” of the song’s cutting edge production, its release has also become a source of what sounds like legend. Despite its massive popularity and success, the label actually lost money on the single at first. This was due to the cost of production for the album sleeve. Hook told NME in 2015: “…it’s absolutely true. Factory sold it for £1, and it cost £1.10 to make because of the sleeve – which had to have three die-cuts, all individually – the cost price to make it actually cost more than that. […] Tony ended up having those wonderful brass awards cut for us to celebrate 500,000 sales, when what we were actually celebrating was a loss of £50,000. […] They did rectify it later by having a normal sleeve, but that only came after a massive amount of copies had been sold.” The track has since gone on to become the best selling 12” record of all time.

Through exploration and discovery, the members of New Order pieced together a new and innovative sound, bringing together diverse influences and charting their way into a new territory of electronic dance music. BBC Radio 2 called the track “a crucial link between Seventies disco and the Dance/House boom that took off at the end of the Eighties.” Charting this historic shift in dance genres across the eighties, “Blue Monday” has left behind a legacy of influence and inspiration. Producer Roger Lyons recalls “‘Blue Monday’ turned my world upside down when I first heard it…I was about 17 at the time and I thought it was the best thing I’d ever heard.” Almost 40 years later, the single has proven itself to be one of the most influential dance music tracks of its time, and the song marks a defining moment in establishing New Order’s unique identity and sound.