If you record audio using too low a sample rate, a kind of sampling error called aliasing can occur. With regards to audio, aliasing is defined as the misidentification of a signal frequency, which can introduce distortion or other artifacts into the recording. Aliasing is easy enough to avoid, but it takes a little briefing on the basics of digital audio.

In the easiest terms, aliasing is a type of artifact in digital audio when the original analogue signal gets misidentified by the digital system. When we take an analogue signal and record it into our DAW, the system reconstructs it digitally. Sometimes the digital reconstruction is not an exact copy of the analogue one, and we end up with errors.

Aliasing is just a part of the digital audio game. However, we can take steps to minimize or avoid it all together by understanding some other important concepts.

An A/D (analogue-to-digital) converter will allow you to convert analogue signal into digital for recording in your DAW. On the other hand, a D/A (digital-to-analogue) converter lets you convert stored digital information into an analogue format.

All of this is done automatically by your audio interface. In the past, there was some debate as to which interfaces had the best converters. However, today’s standards are exceptionally high — even in budget interfaces.

Sample rate and the Nyquist Theorem 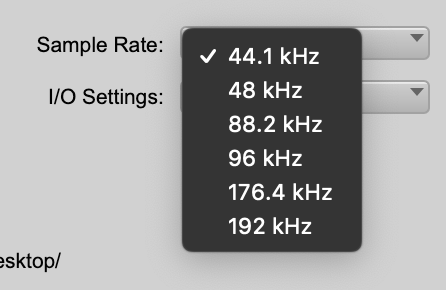 The Nyquist theorem states that the highest recordable frequency is equal to half of the sample rate. So at 48 kHz, you can record all the way up to 24 kHz — called the Nyquist frequency.

In reality, it would be pretty unlikely to have a signal with frequencies extending well beyond 20 kHz, but it’s a good idea to understand how sample rate effects the frequencies you can safely record.

While sample rate determines frequency, bit depth corresponds to the dynamic range of your recording. Without getting too technical about the 1s and 0s responsible for resolution, tracking at 24-bit, for example, provides plenty of headroom to get above the noise floor, while still staying far away from clipping your converter. 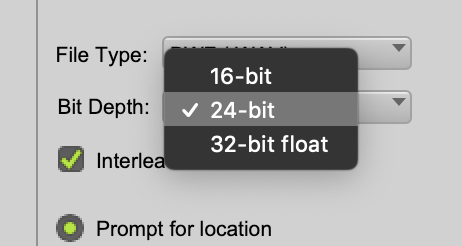 Each “bit” amounts to 6 dB of headroom. So 24-bit x 6 = 144 dB of dynamic range! That’s a massive amount of headroom; you then simply have to record a strong enough signal to get above the incredibly low noise floor.

Many songs also have a bit depth of 16 because it keeps the file size down, and 16-bit/44.1kHz is standard CD format. Now, a bit depth of 24 is commonly used when uploading songs to streaming services like Spotify and Apple Music.

Once you have a recorded waveform stored digitally, you’re going to need to play it back through your studio monitors or headphones. At this point, D/A conversion takes place; the converter uses the stored information to construct an analogue signal which gets sent to your speakers.

If the audio you recorded wasn’t done at a high enough sample rate and bit depth, the reconstruction of the original analogue signal may be inaccurate after D/A conversion.

There are two forms of aliasing that can take place: either there will be silence, or the signal will be recorded as if it were a lower octave, completely misrepresenting the original signal.

How to avoid aliasing

To prevent aliasing, all you have to do is record with an adequate sample rate. That is, you should choose the sample rate that best represents the Nyquist frequency you wish to record up to.

The default sample rate is 44.1 kHz, meaning you can safely record frequencies all the way up to 22,050 Hz. In most cases, this is more than enough headroom to avoid aliasing, though you can choose to record at 48 kHz for a bit more safety while also keeping file size relatively low.