Some time ago, we took a look at the best USB audio interfaces for home studios on a budget. The idea behind the list was to compile some of most tried-and-true interfaces for the home recorder likely needing no more than 2 inputs. Many of these interfaces were in the $150 to $200 price range, with the absolute maximum costing right around $300. Not too shabby!

Many of the market’s most popular audio interfaces (your Scarletts 2i2s, etc.) fell into this category, showing how you can get fantastic results for very little money. All things considered, there are even less expensive options out there providing great results–all at $100 or less!

What to look for in a budget USB Audio Interface

These days you’re going to get pretty good sound out of just about anything. Audio interfaces have gotten to the point where even the most affordable offerings still provide high quality sound. The main thing you’re going to want to look for is the number of preamps and inputs. This will come down to personal preference based on what you plan to record. In many cases, just one preamp is enough for the average home studio solo artist, but having the extra flexibility of more inputs means you have room to expand.

Another thing to be on the look out for is additional features which appeal to your taste or needs. For example, you might love the Mix feature that some of these interfaces have, which blends the amount of playback versus signal going in. Or you might really love the Air function on the Scarlett interfaces. Take a close look at what these interfaces offer, beyond I/O, to really determine what’s best for you!

The Best USB Audio Interfaces for $100 or Less

Far and away one of the best bang-for-your-buck interfaces available, the UMC404HD packs a whopping 4-in/4-out punch—with MIDI I/O—for just $169. Okay, so it’s more than $100, but most competitors don’t come with 4 inputs for less than several hundred bucks. Behringer has brought a versatile interface to users at an incredibly low price.

Definitely at the top of list for project studios with heftier I/O needs, you can track at 24-bit/192 kHz resolution and take advantage of 4 MIDAS-designed preamplifiers.

Probably closer to what you’d expect to get for only $119, the Scarlett Solo is a simple, single-input interface (1 preamp, 1 Hi-Z input). While it may be hard to justify the hundred bucks on such a minimalist unit based on what competitors offer, Focusrite produces quality equipment that you can trust.

Low latency, 192 kHz sample rates, a phenomenal Focusrite preamp with an Air circuit for analog magic…it’s all there, just in a tiny footprint! If your needs are bare minimum, the Solo is a nice choice. 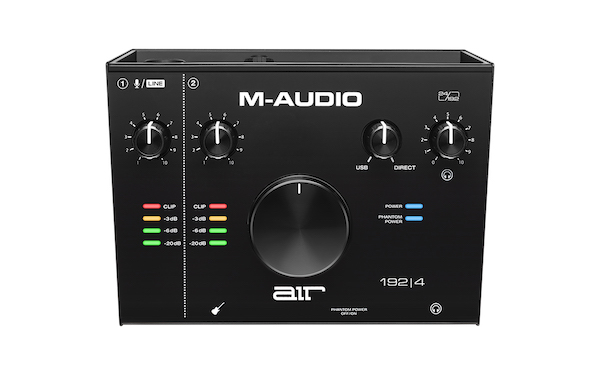 The AIR 192|4 is an update to M-Audio’s previous M-Track series of big knob desktop interfaces. This high-speed USB-C interface offers minimal latency and the ability to record up to two tracks at the same time (1 XLR preamp, and 1 1/4″ input). Like most of the best USB audio interfaces these days, it supports resolution up to 24-bit/192 kHz for the absolute highest quality sound possible.

If the name sounds familiar, that’s because only a couple of digits have changed since you saw it last!

As the name suggests, the 202 is a 2-in/2-out version of the larger 404. With a price tag of $89, the UMC202HD is one of the most affordable 2×2 interfaces on the market. Cost considered, this is one of those pieces that isn’t only a great first interface, but an awesome backup as well.

$99 is the magic number, and the PreSonus AudioBox delivers. In the company’s own words–“simple, reliable, and portable”–this 2-in/2-out interface supplies everything you need to make quality recordings at home or on-the-go.

A handy mix control allows users to adjust the level between the input signal and your computer’s playback, and MIDI I/O lets you connect a synthesizer or a controller. You’ll probably find the AudioBox has it all, whether you’re in the studio or on the road. Straightforward and rugged, Steinberg’s UR12 interface is purposefully designed with beginners in mind.

A single D-PRE mic preamp and line input provides minimalist I/O for musicians’ first foray with recording, or for a frequently-flying producer. Cubasis LE, part of the bundled software which allows you to record on iOS devices, ensures maximum portability. At $114.99, the UR12 is a competitor to the previously featured Scarlett Solo. 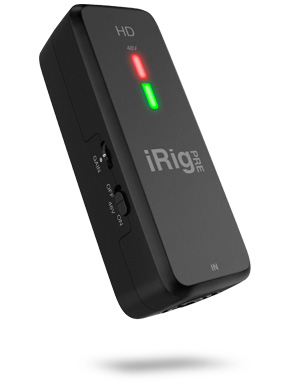 IK Multimedia makes some of the coolest portable interfaces for iOS or desktop devices. The iRig Pre HD is perhaps the most niche interface listed here, but its nonetheless worth mentioning at the $99.99 price point.

A single, pocketable mic pre lets you record directly to your iPhone, iPad, Mac, or PC. The Pre HD may be ideal for vocalists who frequently track while traveling, or who may not produce their own music at home. It’s also an excellent option for boom operators capturing production audio on film or TV shoots.

Of course, you can use it with any microphone to capture any source you’d like, but these are just a pair of scenarios which particularly suit this interface. It’s far from the most versatile USB audio interface on the list, but it does one thing remarkably well, and with a very elegant design.

The 24c is a 2-in/2-out USB-C with high-quality preamps, onboard mixer, and elegant LED display for metering. Built for anyone just getting started, or experienced users who need the best sound on-the-go, this new generation USB audio interface delivers. It’s another interface to sneak in this list priced higher than $100 ($169), but we believe it warrants consideration. 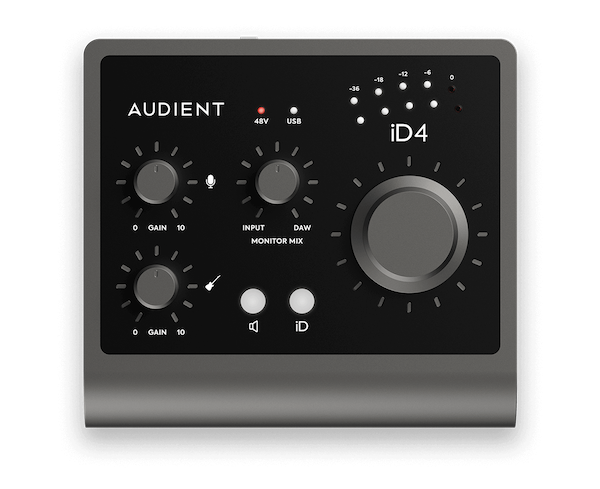 Audient makes one of the classiest looking affordable USB interfaces around. The ID4 MkII contains one Audient console preamp and one instrument input, class-leading converters, dual headphone output, iOS compatibility, and more. It also has some of the lowest self-noise of any interface, meaning your recordings will be crystal clear, always. Premium quality means premium price, and this bad boy comes in at double what we are shooting for ($200)…if you want to explore affordable premium quality, Audient is a good place to start.

The Most Affordable USB Audio Interface

Behringer strikes again! Comparable to the Scarlett Solo or Steinberg UR12, the UMC22 does what the others do for $59. Skip your morning coffee for a week, and you’ve pinched enough pennies to jump in the home recording game. 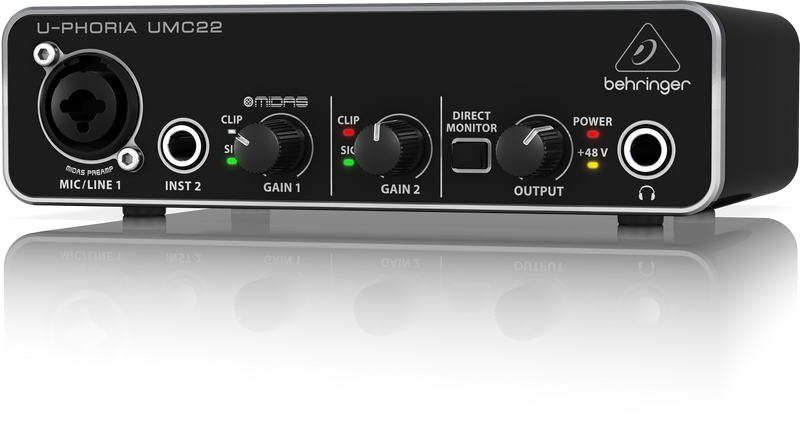 It’s a silly cliché, but you almost can’t afford not to own one of these. Though it’s limited to 48 kHz sample rates, it still contains the MIDAS-designed preamp that its bigger brothers have. It also has a 1/4″ input for directly recording guitar, bass, or other line-level instruments.

On an absolute shoestring, the UMC22 is the clear winner here. It just goes to show, the best USB audio interfaces hardly have to cost a thing.