Best Audio Interface for Mac in 2022 (Entry-Level & Beyond)

Apple computers are standard in creative industries because of their reliable and uncluttered operating systems. People make music on PCs as well, but sometimes have a harder time finding compatible hardware and software. Or, they encounter bugs and have stability issues when a product first comes to Windows. If you own an Apple computer you’re pretty much set for music production; these are some picks of the best audio interface for Mac.

P.S., lots of these are Windows compatible too, so they’ll work for everybody!

One of the primary features on all current Apple computers are Thunderbolt 4 ports. TB 4 uses a USB-C connector, but not all USB-C connectors are TB 4 and vice versa. Many interfaces make use of Thunderbolt for lower latency and high transfer speeds. At the time of writing, interface manufacturers utilizing Thunderbolt are likely still doing so using TB 3. As is often the case, computer designers like Apple set the tone, and the industry plays catch up.

Certain PCs are Thunderbolt enabled too, but not all of them yet. This is one factor that distinguishes the best audio interface for Mac from PC/Windows. 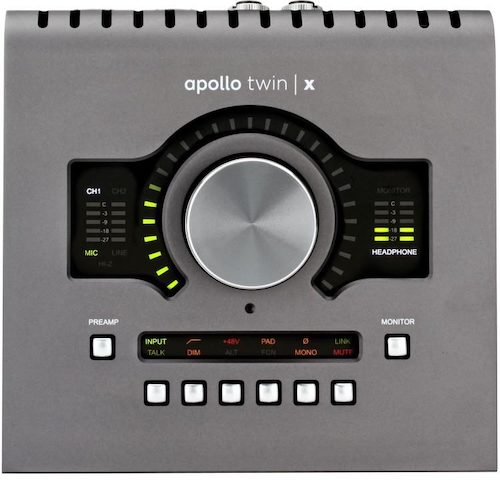 Universal Audio makes top-notch, industry-leading interfaces. The Apollo Twin is one of the most popular options, combining power and versatility in a desktop-sized package.

The X series introduced Thunderbolt 3 compatibility over the previous generation of Thunderbolt 2 Apollos. The Apollo Twin X pairs perfectly with Mac, and even comes in a color similar to Apple’s own ‘Space Grey.’

It features a pair of ultra-clean UA preamps, monitor outs, and a pair of additional line outs for connecting outboard equipment. There’s also a dedicated Hi-Z input for instruments, as well as a headphone out on the front of the interface. Purchasing a Universal Audio interface also enters you into their DSP world, and each interface comes with a free bundle of incredible plugins.

The Twin X comes as a DUO or QUAD version; this is the number of cores inside for processing plugins. Two covers a lot of ground, so unless you’re running dozens of plugin instances, the Twin X DUO is a good start.

Because of its Thunderbolt 3 compatibility and seamless integration with Apple computers, the Twin series is easily one of the best audio interfaces for Mac. It comes at a premium price point, however, so keep in mind there are more affordable interfaces out there.

The Scarlett 2i2 is one of the best-selling audio interfaces of all time. The 3rd gen Scarlett 2i2 features two upgraded Scarlett mic preamps, 24-bit/192kHz converters, optimized preamp gain structure, low latency, and Hi-Z instrument inputs.

The mic preamps now include Focusrite’s ‘Air’ mode that provides the effect modeled on the company’s legendary ISA console transformers. It opens up your recordings in the high-end and makes them sound ‘expensive’! It’s switchable on/off, so you can go back and forth depending on the source and desired effect.

Easily one of the greatest values around, the Scarlett 2i2 is an excellent audio interface for Mac, whether it’s your first one or just a backup. Keep in mind that it’s not currently Thunderbolt 3 enabled, and the default cable it comes with is USB-C (out from the interface) to USB 2.0 (to connect to your computer) — you’ll need an adapter for your MacBook. 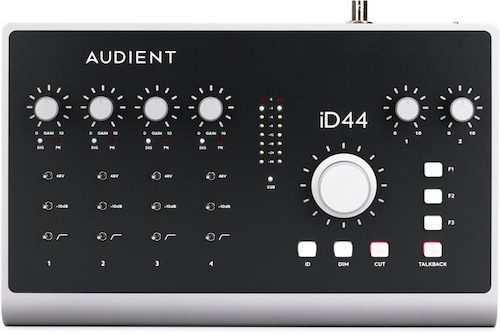 The iD44 essentially brings the performance of an Audient console to your desktop. The preamps have the same discrete circuit design found in the company’s renowned ASP8024-HE console. These preamps are classy and clean, but have just a touch of analog tonality for some extra character.

This interface also comes with dedicated Talkback, Dim, and Cut controls, alt monitor outputs, and ADAT connectivity to expand your rig. For all of its features, the iD44 is an incredible value and definitely a prime pick as the best audio interface for Mac.

The PreSonus Studio 24c is a straightforward interface on par with the Scarlett 2i2. It comes with a pair of award-winning XMAX preamps, MIDI in/out, and a dedicated mixer knob for dialing in the perfect blend of input signal and playback material.

USB-C (non-Thunderbolt 3) connectivity means you can plug it right into your MacBook without the need for a dongle. The Studio 24c also comes bundled with software, including Studio One Artist if you don’t already have a DAW, as well as the Studio Magic Plugin Suite featuring software from manufacturers like Maag Audio, Lexicon, and Arturia. 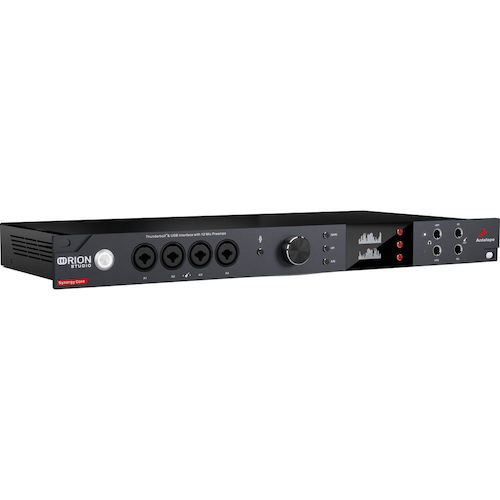 You can further expand your I/O by connecting up to 16 channels via DB25. And similarly to Universal Audio, Antelope has its own ecosystem of DSP plugins. There are 50 plugins from Antelope included with this interface.

Far beyond entry-level, this is a premium interface that can serve as the core of an expansive studio setup. 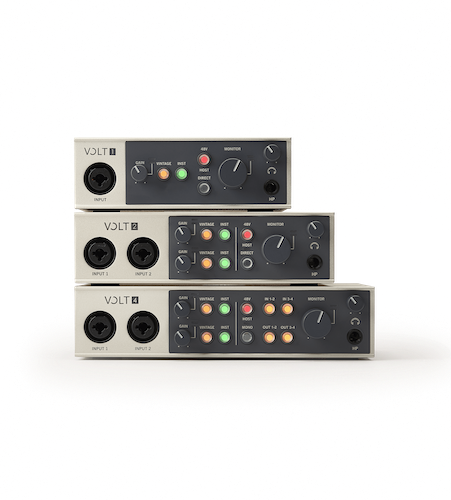 The latest entries from UA is the impressive entry-level Volt series of audio interfaces. These include the 1-in/2-out 176, the 2-in/2-out 276, and the 4-in/4-out 476. Volt interfaces connect over standard USB and are compatible with Mac as well as PC and mobile. One of the coolest features about these interfaces are the included preamp and compression emulations to add a bit of analog flair to your recordings.

One of the coolest new interfaces on its way is the Neve 88M with circuitry based on the classic 88RS console. This unique desktop USB 3.0 interface incorporates not only Neve preamp technology, but the inclusion of ADAT on an interface this size expands I/O up to 10-in/10-out. The 88M is a rugged, high-end portable interface with a ton of analog character — not something we see everyday in an audio interface.

There are so, so many interfaces out there. This is obviously just a small selection of popular choices, from the entry-level Scarlett 2i2, to the mid-level Apollo Twin X, all the way to the professional Antelope Orion.

As far as the best audio interface for Mac is concerned, you’ll probably want to find a USB-C/Thunderbolt 3 supported interface to make use of the standard ports on Apple computers without needing dongles. Apart from that, virtually every interface out there supports Mac OS!