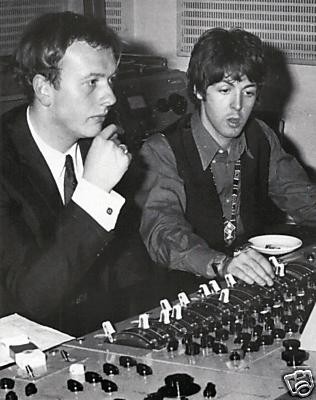 At only 15 years old, Geoff Emerick joined EMI Studios at Abbey Road. On only his second day of work at EMI witnessed The Beatles in 1962, recording for the first time with new drummer Ringo Starr the song ‘Love Me Do’. In 1966, at the age of 19, he Engineered The Beatles ‘Revolver’. Considered by many the greatest album ever made. With George Martin as the Producer and Emerick as the Engineer The Beatles were able to use the studio as another instrument of their creativity. Emerick’s innovations in the studio shaped the sound of music all over the world.

In his book Here, There and Everywhere: My Life Recording the Music of The Beatles, published in 2006 he detailed many of his experimental and groundbreaking techniques. He suggested John Lennon sing through a Leslie Speaker Cabinet on “Tomorrow Never Knows” and recorded Paul McCartney’s Bass on “Paperback Writer’ using a speaker as a microphone. These recording tricks and many more that he pioneered have become staples for many of us Engineers and Producers.

Outside of The Beatles Emerick recordings were beautiful and successful. His first Engineering project was for Manfred Mann’s ‘Pretty Flamingo’ which became a number 1 single. In 1968 he recorded The Zombie’s masterpiece Odessey and Oracle. His first Production was Badfinger’s 1970 release No Dice. After the Beatles he continued to work Paul McCartney, Engineering his first solo record, as well as Paul and Linda McCartney’s Ram. Then in 1973, he co-produced Wings’ Band on the Run, deservedly winning a Grammy.

He continued to work heavily throughout the ’70s and ’80s, working with the Cheap Trick, Supertramp, Mahavishnu Orchestra, Robin Trower, America, Stealers Wheel, and many others. In 1982 he Produced Elvis Costello’s Imperial Bedroom. Recent years had seen him giving Masterclasses on Production and Engineering sharing his massive acquired knowledge with a new generation of Producers, Engineers, Mixers and Artists. His legacy will live forever in some of the best music ever recorded, music he recorded.