For anyone who’s endeavored the mighty task of recording a full band on a shoestring budget, you know one of the hardest set-ups to mic up is a drum set.

If you’re new or just starting out, there’s a pretty good chance you don’t have the best equipment, let alone a lot of it. So if you’re staring down a dog-eyed drummer waiting to record his parts, don’t worry; there’s an easy and incredibly effective way to mic a drum set with nothing more than four mics.

In this post we’ll outline one method that will get you a heavy, all-encompassing sound for a standard drum set up. This widely used practice is called the Glyn Johns Methods.

Who is Glyn Johns? Well, Johns was and continues to be an incredibly important recording pioneer, who was made famous for his recording method. Glyn Johns initially started his career assisting the Beatles, later going on to work with artists including The Who, The Rolling Stones, The Eagles, Eric Clapton and last but not least Led Zeppelin. Just take a second to appreciate the fact that he recorded the great John Bonham using only four mics. So let’s get into it.

Like mentioned before, this method involved only four microphones: two overheads, one for the kick drum and one for the snare. For overheads, you’ll want to use ribbon microphones, I find the Beyerdynamic M160 works well. As for your kick mic you can go for either a dynamic or condenser mic, though I’d suggest and AKG d1112 MKII. Dynamic is best for the snare, but doesn’t require anything fancy (a Shure sm57 works very well).

At this point, you might be saying “two overheads, a snare mic and a kick mic seems pretty standard, what’s different about this?” Well, the whole reason the Johns method is so effective is the way the mics are placed. The overheads work to capture a balanced sound of the entire drum kit, with the kick drum and snare drums acting as spot mics for added punch.

Learn how to use the Glyn Johns Method here

To begin, use a tape measure and place your first microphone between 40-60 inches above the center of the kit (directly above the snare) pointing directly down. This first mic should pick up a good blend of the entire kit. If the high tones like cymbals are far more present than the rest, move the cymbals back slightly or dampen with tape.

Once you’ve found a good blend, move on to the second overhead mic. This one will be set up on the drummer’s right hand side, approximately 6 inches above the floor tom. What’s interesting about this one is it should be pointed towards the high hat, which means the mics grill will be perpendicular to the center overhead mic.

Now, measure the distance between the first overhead and the center of the microphone again using a measuring tape or a cable (marking off it’s length with tape). The second overhead mic should be exactly the same distance from the snare as the first. Adjust accordingly. It’s super important to make sure that both the right and left overheads are exactly the same distance from the snare to avoid issues with phase. If your mics are out of phase significantly, you’ll lose out on certain frequencies and end up with some wonky sounding tracks.

By now, you should have a pretty well rounded track, so it’s time to finish up by beefing up your track with some spot mics.

Take your preferred kick drum mic and place it in the port hole of your kick drum, or close to the skin. Achieve your desired beefiness by moving the mic closer or farther from the center of the drum. You can also muffle some of the boominess of the kick by adding a blanket or pillow.

Finish up by placing your last spot mic over the snare. Similar to the kick spot mic, this one is a matter of personal preference. Position your mic a couple inches above your snare, angled down. Point the snare towards the center, aimed at the drummer. Since you already have a full picture of sound with your overheads, play around with the snare and kick mics to achieve whatever kind of sound you are going for.

When it comes to the mix, keep your snare and kick in the center. Pan the overhead mic of you snare far right, and the overhead of the floor tom all the way left. If everything is set up properly, it should sound fairly well balanced, and is ready for your to make some creative tweaks.

Before we finish up, there’s a couple things to note.

Tuning plays a huge component of how your drums with end up sounding. What skins you use, how you tune them and how new they are will play into how “bright” or “dark” they sound.

Secondly, where you choose to record your drums will also make an impact on your overall sound. If you want to go full John Bonham you’ll probably have to record a proper recording studio with a lot of open space. Otherwise with enough sound diffusers, almost any space can work. 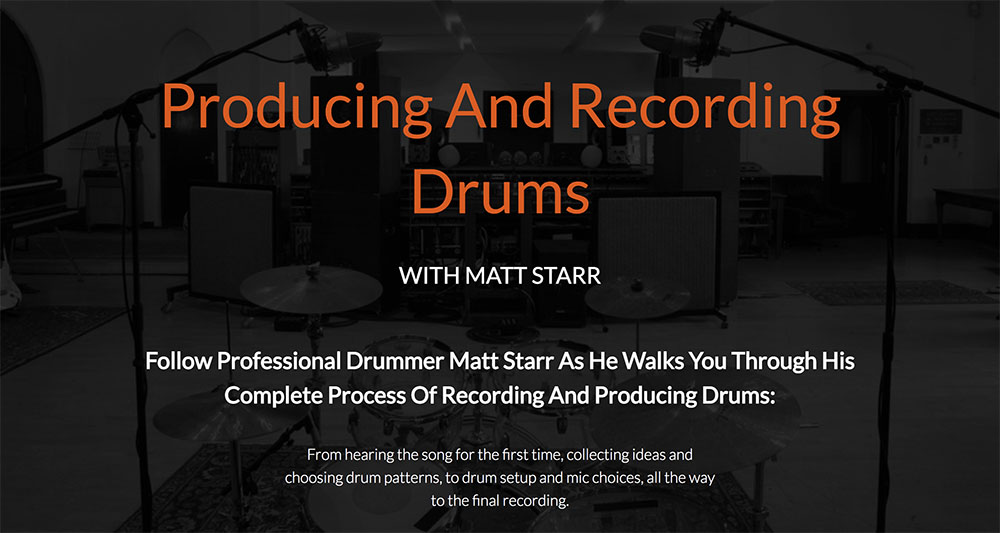