How to EQ Acoustic Guitar in a Mix

Before you start to EQ acoustic guitar, however, you’ll want to make sure you have the best recording of it!

A well recorded acoustic guitar will make EQ’ing it much easier. The most important factors are player, performance, instrument, and mic choice/placement—in that order!

From there, you should focus on other details that will impact the overall performance you’re capturing.

Proper Seating for the Player

If you can, choose a chair where the arms can either go down or be removed so that you have full mobility with your guitar. A stool is another good choice.

This is especially important if you have an artist recording; you want to make them feel as comfortable as you can. The last thing you’d want is to have your guitarist fighting their chair.

Also, be mindful of any potential noise the seat itself might make. You really don’t want a creaky seat ruining a perfect take!

A “double boom” stand is a great option. This way you can keep the bulk of the weight on the back of the stand so when the mic is on the other side, it doesn’t droop. You might not think this is a big deal, but you’ll notice a sound difference if it moves. You want to keep the mic in the same plane when it’s this close. Any slight changes will change the way it’s recorded.

So, have a quality mic stand on hand that’s sturdy enough to not droop or change position! 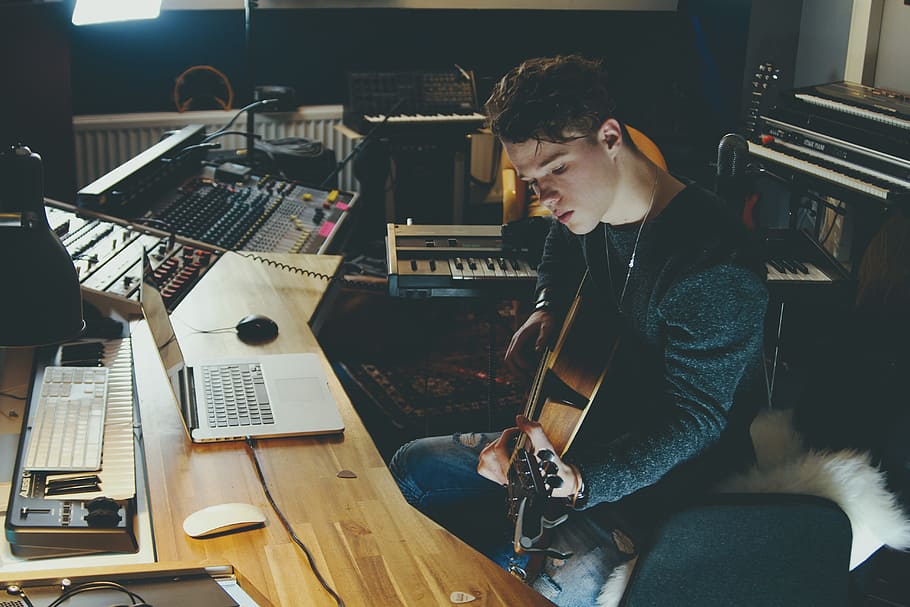 This might seem obvious, but buttons on your sleeve, a necklace, or anything else between you and the guitar can get picked up by a mic! Be mindful of anything that may hit the guitar and have the artist adjust accordingly.

Small diaphragm condensers like the Neumann KM 184 or AKG 451 are great on acoustic instruments. They’re usually extremely detailed and crystal clear in the high end for a very ‘hi-fi’ or ‘3D’ sound which is phenomenal on acoustic guitar.

Likewise, you can get a great result from your favorite large diaphragm condenser as well. As we mentioned earlier, the dynamic SM57 with a budget interface can work wonders too!

Remember, it’s more about the performance than anything else. As long as your mic choice and placement is ‘in the ballpark,’ you should be just fine.

How to EQ Acoustic Guitar

Hopefully you were able to engineer the recording process to make your life mixing easier, or were at least able to get well recorded acoustic guitars from somebody else!

The following are some general areas of interest on most acoustic guitars:

Almost like a vocal, the frequencies around and below 100 Hz in an acoustic guitar aren’t entirely necessary. This is especially true in a full arrangement with lots of low-end content from the kick, bass guitar, keyboards, etc. High-pass filtering around 100 Hz will help clean up any muddiness in the low-end.

Another important band in acoustic guitars is around 8 kHz and up. This area has a lot of sizzle that can compete with cymbals, so it wouldn’t be a bad idea to also low-pass filter the high-end to create space for all this frequency content. Remember, guitars are midrange instruments!

Tune the midrange for a fatter sound.

As we’ve mentioned, don’t sweat the low end too much; that’s where the bass guitar and/or kick will shine. And don’t sweat the high end (8+ kHz) either; there isn’t much useful information up there in a full arrangement. Instead, focus on getting the guitar’s dominant frequencies to sound their absolute best.

To EQ acoustic guitar for fatness, sweep around with a big boost until you find the spot where it sounds thick but still bright enough to cut through the mix. Then back this boost down until it still cuts without being too muddy/full-sounding.

Determine the acoustic guitar’s role in the arrangement.

For example, in a singer-songwriter track you should feature the acoustic guitar more prominently. It will also have to carry some of the low-end and top-end missing from instruments that aren’t part of the arrangement. In this case, you would probably want to leave the guitar as full-frequencied as possible.

On the other hand, if the guitar is just a supporting instrument, you can get away with high- and low-passing, tuning the midrange, and having it sit just beneath or around other instruments without overpowering them.

Keep the basic principles in mind, but don’t be afraid to mess around either. Learning how to effectively EQ acoustic guitar takes a healthy amount of experimentation!