IK Multimedia Brings the Magic of Sunset Sound to Your DAW

The legendary Sunset Sound is a world famous studio where some of the most iconic music of all time has been recorded. Few studios in the world have made as much of an impact on music culture as Hollywood’s Sunset Sound Studio.

Needless to say, the energy at Sunset Sound is incredible. With such a rich history, it’s no wonder we spend so much time there. We’ve done many projects in Studio 3, which is known as the “Prince Room” since he tracked so much of his work there between 1981 and 1987. He even went so far as to live in Studio 3 for stretches at a time!

Now IK Multimedia’s T-RackS Sunset Sound Studio Reverb lets you step inside these rooms at Sunset Sound, recreating the sonic vibe of each of the echo chambers, live rooms, and booths from all 3 of the studios. It even captures the essence of their custom consoles and classic mic collection, making it the closest thing you can get to tracking in the studios themselves—all in an easy-to-use plugin.

In addition to the rooms and chambers, T-RackS Sunset Sound Studio Reverb also offers two of Sunset’s vintage plate reverbs, an EMT 140 and Echoplate, as well as their AKG BX-20E spring reverb.

IK chose the best-sounding of Sunset’s units, adding that classic, vintage hardware reverb sound and giving you a comprehensive set of reverb types.

T-RackS Sunset Sound Studio Reverb gives you a total of 12 spaces, with 3 echo chambers, 3 live rooms, and 3 vocal booths, plus vintage EMT and Echoplate plate reverbs and an AKG spring reverb still in use at the facility today, giving you a full suite of reverb effects in a single plugin.

This week we’re heading back to Studio 3 at Sunset Sound with IK Multimedia and engineers Ross Hogarth and Mark Linett. 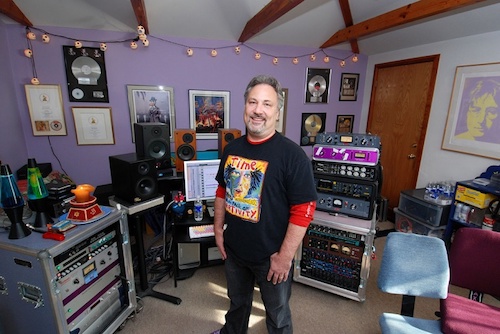 Ross Hogarth is a multiple Grammy-winning producer/engineer/mixer for artists like Van Halen, Gov’t Mule, Roger Waters, The Black Crowes, Shawn Colvin, John Mellencamp, R.E.M. and Jewel. He’s enjoyed over 40 successful years in the studio working with some of the biggest artists of all time. Ross also won Tracking Engineer of the Year in 2014 at the very first Pensado Awards.

Ross’ varied experience and taste opened up all creative doors and possibilities. He’s never allowed himself to be pigeonholed or trapped in any one musical genre, as his studio work runs the gamut from the heavy metal of Motley Crue and Coal Chamber to the Grammy-winning Keb’ Mo’ release Slow Down. He’s also worked on recent releases by Van Halen, and Grammy-winning Ziggy Marley and Taj’Mo’ albums. 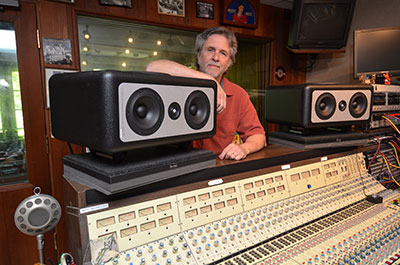 Mark Linett is a Grammy-winning engineer and studio veteran, in addition to being well known for his work on Beach Boys retrospectives. He got his start in the early ’70s in Hollywood at Artist Recording, Paramount, and Mystic Studios after running his own PA company.

George Massenburg later took him on to assist at Sunset Sound for several years before he left to work at Amigo, which is Warner Brothers’ now defunct studio. At Amigo he engineered sessions with Randy Newman, Rickie Lee Jones, Los Lobos, and Michael McDonald.

In the late ’80s, Mark did most of the engineering for Brian Wilson’s first self-titled solo album. This led to him eventually compiling The Beach Boys’ back catalogue for reissues, like the Good Vibrations box set and Pet Sounds projects. Each of these included the box set, stereo and surround mixes, and live concert recordings.

Mark built his own studio in Glendale thirty years ago. Besides many Brian Wilson and Beach Boys projects, over the years the studio has hosted a wide range of artists including Elton John, Booker T. Jones, Jerry Lee Lewis, and Miley Cyrus. The studio was also used for Mark’s first ever mix of Pet Sounds in stereo and 5.1!

The History of Sunset Sound

Work on Sunset Sound Studio 1 first started in 1958. Not everyone knows that the Sunset Sound complex was started by Walt Disney’s director of recording, Tutti Camarata, in 1958. As the story goes, Camarata suggested to Disney that he purchase a recording studio, to which he responded, “Why would I want to own a studio? I’d rather be a client.”

Camarata took those words as a suggestion to open his own, so work on Studio 1 began! The room was built in a former auto shop, which had a sloping floor so automotive fluids would trickle to a common drain. The sloped surface also served to reduce standing waves and poor acoustics created by parallel surfaces. It wouldn’t be long until audio for the early Disney films was being recorded at Studio 1, including Mary Poppins, Bambi, and 101 Dalmatians.

Over the years, Studio 1 would become the three-room complex it is today, where over 200 gold/platinum records have been recorded!

In 1981, Tutti Camarata and Sunset Sound purchased The Sound Factory.

After the acquisition, Sunset Sound opened the Sound Factory as its low-cost alternative for overdubs. It developed its own client base over time and actually became a full-time subsidiary studio of the flagship Sunset Sound.

Though this wasn’t the original intention, the outcome was much better than anticipated! The Sound Factory itself was home to even more gold and platinum recordings. The Sound Factory also rented rooms to producers for long-term use.

Sunset Sound sold the Sound Factory studios in 2017, and the latter operates as its own entity.

Sunset Sound has hosted some of the biggest artists in history.

The facility’s early Disney recordings are historically significant in their own right, but the musicians who have called Sunset Sound home for a time are absolutely incredible! Below is a (long) list of phenomenal artists who have worked in Studio 1 over the years:

Take a second to catch your breath, and be sure to check out IK Multimedia’s T-RackS Sunset Sound Studio Reverb!