Inspired Acoustics isn’t necessarily one of the better known plugin developers out there. The reason being, they’re responsible for an impressive collection of virtual pipe organs which is a pretty niche offering. No matter, the level of detail the Inspired Acoustics team achieves is exquisite, and their Inspirata reverb exemplifies that. Check out the rest of this Inspirata reverb review if you’re searching for the right convolution software to add to your arsenal.

Convolution reverbs recreate actual acoustic environments by using impulse responses. And it’s worth nothing that the folks at Inspired Acoustics are acousticians themselves. This lends a level of detail to their plugin that’s just…immersive!

Now, because of the intensive CPU and hard disk load convolution reverbs impose, they’re not something you reach for at every turn — at least not usually. There aren’t any rules, though. If you want unparalleled detail with your reverbs, you’ll absolutely get it with Inspirata.

What Does It Offer?

Simply put, Inspirata offers one of the most realistic reverbs possible with software. Convolution reverb has been around for a while, so we’re accustomed to how great it can sound. Inspirata dials it up a few notches and makes other convolution reverbs seem stagnant by comparison.

For music, you can move instruments as well as the listener around a space. For post-production, you can automate movement around an acoustic environment for a ridiculous amount of realism. The only limit is your imagination, however, because Inspirata provides unprecedented control.

How Does Inspirata Work? 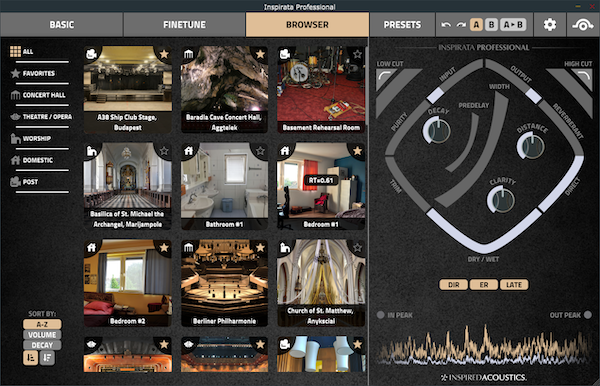 From a design standpoint, Inspired Acoustics sought to eliminate common reverb parameters. The result is more hands-on control over the exact sound we want to hear, as opposed to trying to achieve the desired sounds through things like pre-delay or diffusion. The easiest way to explain this is Inspirata’s Clarity control: if you want an instrument, voice, or sound more clear and defined, use the direct parameter — no wet/dry balance adjustments, no diffusion, no EQ, etc.

From the Browser panel, you can choose a space for your sounds to live; this includes both the listener (Receiver) and the instrument/sound (Source). Shoot over to the left and you’ll find the Basic panel, which gives you the ability to position your Receiver in the room. The Finetune panel shows the Receiver and all Sources in the space, and the most basic way to start shaping the sound is to move things around.

So let’s say you’ve chosen a concert hall, and you’ve positioned the Receiver to be facing the stage sat somewhere near the middle of the room. There’s a vocalist on stage and you want them to be more upfront, so you drag the vocals forward. There’s a background vocalist who should be less forward, so you push them more towards the back of the stage.

That’s the fundamental functionality, but Inspirata reverb has a ton of parameters that let you adjust the sound in unbelievable detail.

A Massive Library of Sounds

Massive is really the only word to describe how big the library is. It’s massive to the tune of 193 GB and 50 sampled acoustic environments to choose from, including studio control rooms, scoring stages, concert halls, churches, theaters, cellars, clubs, offices, bedrooms, crypts, and the list goes on. There’s a sample of everything!

Inspirta Review: An Excellent Reverb Plugin (If You’ve Got the Space)

Inspirata is truly an exquisite convolution reverb. It’s heavy in terms of GB, but also in terms of CPU usage, so you’ll need a fast machine with plenty of RAM so it doesn’t bog down the whole system. It also comes in four versions, starting with the Lite one which is the easiest to use (and the smallest — 12 GB of sounds).

Personal edition gives you a stereo reverb with the whole 193 GB library, while Professional and Immersive offer 7.1.2 Atmos capability and up to 22.2 surround respectively.