What is Spring Reverb?

Spring reverb is an early form of synthetic reverb. Similar in principle to plate, spring reverb uses a coiled up piece of metal instead of a flat sheet.

What is Spring Reverb?

A spring system has a transducer at one end of a spring and a pickup at the other. This is very similar to the technology used in plate reverbs.

In 1939, Laurens Hammond applied for the first patent on mechanical spring reverb. His namesake, the Hammond organ, used a built-in spring reverb unit when it started being manufactured in 1960. Hammond’s spring design was a hit! It would go on to be released as a hardware unit called the Accusonics Type 4 Spring Reverb. Leo Fender used the first Accusonics tank in his company’s 1963 Fender Vibroverb amp.

Spring was, for a time, frequently used for recording. They’re perhaps most commonly built into guitar amplifiers since they’re pretty small and inexpensive to make. We can thank Laurens Hammond and Leo Fender for each of their innovations. 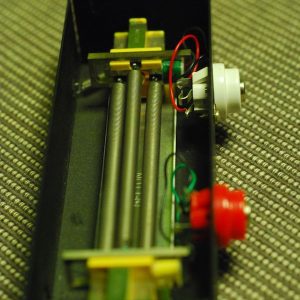 Spring units are practically famous for their uniqueness that you don’t quite get from anything else. Of course, as a synthetic reverb, our ear can tell it isn’t replicating a real acoustic space. This is fine, because spring reverb is simply another tool to have in the kit!

Spring reverb is most often described as “bouncy.” It’s easy enough to imagine that a vibrating coil would certainly have this texture. Remember those tightly coiled doorstops you would flick as a kid? The concept is similar!

Spring units are also typically low-end focused because of the way a signal vibrates the coil. Higher frequencies have shorter wavelengths which may not be able to travel the full length of the spring, moving only single coils at a time. Lower frequencies, with their longer wavelengths, have the power to move multiple coils at once, meaning we get more low end from spring reverb. 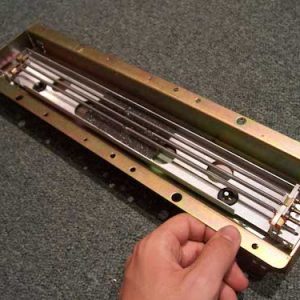 Synthetic reverbs like spring and plate are similar in their uses. Instead of using them the “normal” way, as in creating an acoustic space for mix elements to live, spring reverb is more often used to add color, create an effect, or to fill out other reverbs like chambers, halls, or rooms. Always remember that there’s no right or wrong approach to anything, and that your mixes are only limited by what sounds good! So definitely experiment and test spring reverb on anything and everything.

Spring reverbs are great for adding perceived low end to an instrument. Like we discussed earlier, lower frequencies have the power to vibrate multiple coils simultaneously, overpowering the shorter wavelengths that may only move a single coil at a time.

If you want to add a bottom-heavy dimension with your reverb, spring is a solid choice.

Our ears are very adept at determining whether a sound is natural. Because of this, we instinctively know whether a reverb is coming from an actual physical space, or some place unnatural. Spring reverb is synthetic, and our ear knows this! But that’s okay, because springs can be used as an effect.

Mixing music isn’t always about realism! Depending on the material, sometimes the most outlandish and unusual sounds are the perfect fit for the track. Consider using spring tanks when you aren’t concerned with creating a space that sounds “real.”

Blend It with Other Reverbs

It’s incredibly common to use multiple reverbs while mixing. If you mix from a template, for instance, you might already have chamber, hall, room, plates, and springs set up and ready to go, adding a bit of each to taste as you mix.

Springs are great to blend with other reverbs, because they have a totally different quality from a dedicated space. On a totally dry track, you can pick a space, like a room or hall, and then augment that with plate instead of another room. This ensures you won’t be creating a “room within a room” vibe.

Think about it on drums. If they were recorded in a live space, you’ll have natural reverb already printed. Rather than adding a “drum room” reverb emulation to a real drum room, you can mix in some spring instead.