Parallel compression was developed as a means to an end. The vast majority of compressors are “downward” in action. This means that they work by reducing the peaks in source material. Parallel compression, on the other hand, was designed to act as a form of upward compression. In this case, the dynamic range is reduced not by squashing the peaks, but by bringing up the quietest parts in the material, adding greater detail and excitement to a track. You’ll frequently hear of parallel compression used on drum busses, vocals, or bass guitar, though its uses are truly up to the engineer!

How Does Parallel Compression Work?

As a form of upward compression, parallel dynamic processing takes advantage of human hearing in a clever way. Our ears are sensitive to loud sounds being suddenly reduced in volume, but not as sensitive to quiet sounds being increased in volume. When we use parallel compression we’re capitalizing on that key difference in our hearing. We’re bringing up the quieter parts of a performance while retaining its transients.

Unlike with downward compression, parallel has a unique way of preserving the intensity and “feel” of a performance in a pleasant way. It can make a track much more aggressive and exciting!

The key to setting it up properly is to set the compressor aggressively. This means low thresholds and oftentimes high ratios for ample amounts of gain reduction. A super-fast attack is preferable, and slower releases tend to work well.

Of course, you can get some pretty outrageous results at 2:1 if the threshold is low enough. Increasing the ratio will add more “pump,” “choppiness,” and distortion, which is either a good or bad thing depending on what you’re trying to achieve. As usual, the key here is to experiment. No two mixes are alike, so what typically works might not always apply. Remember that a low threshold, fast attack, and slow-ish release is a good starting point, though.

Now, in analogue console terms, the signal would be routed two directions, one of which would be hit hard by the compressor. The original audio would then be mixed with the heavily compressed signal by ear, to taste.

Parallel Compression in a DAW

One of the easiest ways to add parallel compression to a track is as follows. You would make an auxiliary buss for the track you intend to parallel process. The buss would have the dramatic compression on it, and you would blend the signals together using the Send on the original track. Simple as that! There’s also a method where you’d duplicate the original track, which is equally as simple.

In your DAW, make a copy of the track you intend to process and put a compressor on it. You’ll want to hit the track hard, so exaggerate your compressor’s settings even to the point in which it doesn’t sound pleasant. We’re talking massive amounts of gain reduction! It’s better to use a compressor that can handle upwards of 20 dB of gain reduction while still retaining some clarity. Unless, of course, distortion is what you want, in which case you can really crush the signal with something like an 1176! Sometimes that distorted, overly compressed sound is great.

Make sure the original track is at the desired level, and bring up the compressed copy’s fader until it sits just beneath the original. Parallel compression gives the impression of control without sounding completely squashed. It’s a fantastic way to process vocals, but works with almost any individual instrument, too.

In your DAW, you have to account for latency if you’re routing through busses! If you set up a traditional analogue routing path for parallel compression in the digital realm, the signals traveling through the parallel pathways will arrive at the mix buss at slightly different times. This can create comb-filtering and phasing effects, which sound terrible. You might be left wondering why your tracks suddenly sound much worse than before trying out parallel compression!

To make up for issues with latency, the two signals have to have the same number of processing stages. This means you’ll want to set up a compressor on the “unprocessed” signal, with much more modest settings than the parallel compressed signal. This means the two signals both go through compression stages and are each delayed the same amount of time. 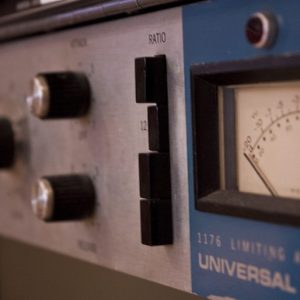 UREI/Universal Audio 1176: One of the most famous and widely used FET limiting amplifiers of all time. It’s tremendous, whether you’re using the real thing or one of many plugin emulations. The Waves CLA-76 version is particularly great, as is the UAD one. It’s very popular with parallel compression, with its lightning-quick attack time and audible character. Try “All Buttons In” mode for parallel, perhaps?

Empirical Labs Distressor: Another fantastic choice. It has many, but one particularly unique feature is the ability to add 2nd- or 3rd-order harmonics to the signal, emulating vintage tape saturation. It also has a wide range of ratio settings for more control. For example, at a ratio of 10:1 with the Attack control set to 10, the Distressor’s circuitry goes into an LA-2A emulation mode. It’s renowned as the Swiss Army knife of compressors and for good reason. Use it as a vocal compressor, on drums, bass, guitar, or anything else, really. It will definitely impart a unique tone when used for parallel compression!

dbx 160A: Again, one of the most-used compressors ever. It may not look like much, sporting just threshold, ratio, and output controls, but it’s highly regarded and has been used on everything. The 160 series was initially introduced in 1976, undergoing various iterations. The 160A is still produced today as world-class hardware compressor.