A great virtual amp can take your guitar recordings to the next level since not many of us can record a 100-watt tube head at home. There are attenuators, sure, and lots of modern amps are being built with direct outs for “silent” recording. Still, a tube head with an attenuator is not only more expensive than a virtual amp, but takes up real physical space and obviously weighs a heck of a lot more. Going the plugin route is a very reasonable alternative these days!

If you’re just stepping into the amp plugin game, this list should give you some good starting points with longtime favorites as well as more recent breakthroughs in amp sim technology. These are a handful of the best amp sims, both free and paid, in 2022!

Arguably one of the best things about software is how affordable it is. As guitarists, we know how crazy expensive real amplifiers and pedals can be; that’s not to mention any of the extra stuff we’d have to buy to record a tube head at home at reasonable levels, like an attenuator or an isolation cabinet. Plugins are comparatively cheap to hardware, and while it’s tough to replicate the feel of playing through a nice tube amp, cost is most certainly a factor for most of us.

Many plugins also offer a diverse tonal palette, like a large selection of amp emulations, effects pedals, cabinets, microphones, and more. So with certain amp sims, you’re really getting a whole collection of different gear for any tone imaginable. 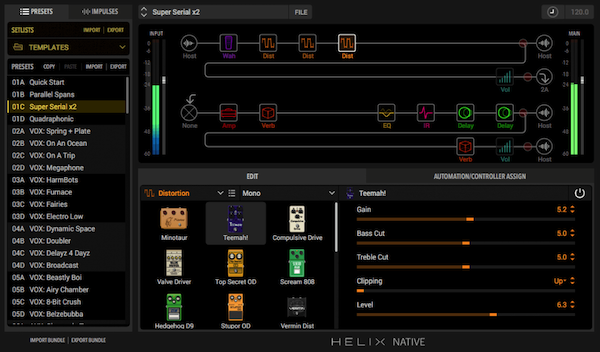 Line 6 are no strangers to amp and effects modeling. They’ve been doing it for over 20 years. It all started in 1996 with the AxSys 212 physical amplifier with onboard digital effects and simulation. When Amp Farm TDM released in 1998, it was a revolutionary piece of software bringing classic guitar amp tones straight to Pro Tools. By the end of 1998 into 1999, they’d mastered the iconic Pod—a kidney-shaped desktop amp and effects modeler.

One of the best amp sims of its kind, Helix Rack debuted in 2016 to compete with Fractal Audio’s AxeFX and the Kemper profiler. One year later, Helix Native brought the same technology inside the hardware unit to the DAW as a standalone app or a plugin insert. Helix Native is flexible, it sounds great, and it’s easily one of the best software amp sims you can get.

AmpliTube by IK Multimedia is massive. When the first version of the software came out almost 20 years ago, it was the first plugin that modeled the entire signal chain of a guitar/bass rig. It’s only gotten better with time, and is available at different price points. There’s even a free version that comes with 41 gear models, while the next step up includes 80 models for $150. The most complete version of AmpliTube 5 includes a staggering 400 models of amps, effects, cabinets, microphones, and more. There’s also a section for adding rack effects, like classic outboard EQs and compressors. 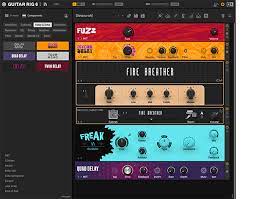 Guitar Rig Pro 6 is a multi-effects processor and amp sim. The amp section contains dozens of modeled classics, but the real magic is in the effects. After picking an amp,  you’d begin to piece together a creative tone from any of the 70 included effects to really take things to the next level. Effects come provided by Native as well as Softube. 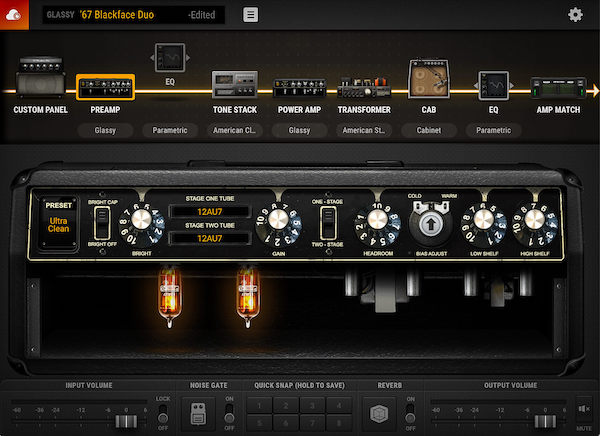 BIAS Amp 2 is actually a virtual amp builder. When you open up the interface you’ll be able to switch tubes, preamp and power amps, transformers, and more. The BIAS Amp 2 also lets you profile the sound of any miked up guitar amp, or you can import an audio file to create a digital simulation of it.

Destructor is a distortion simulation and amp modeler. The name suggests high-gain territory, but it’s equally capable of producing softly compressed guitar tones and even crystal clean sounds. Blue Cat bases their modeling on what they call the perceptual model as opposed to the painstaking process of emulating hardware electronics. This means that the signal chain is bare minimum, and the sounds are made to fit into the mix effortlessly. 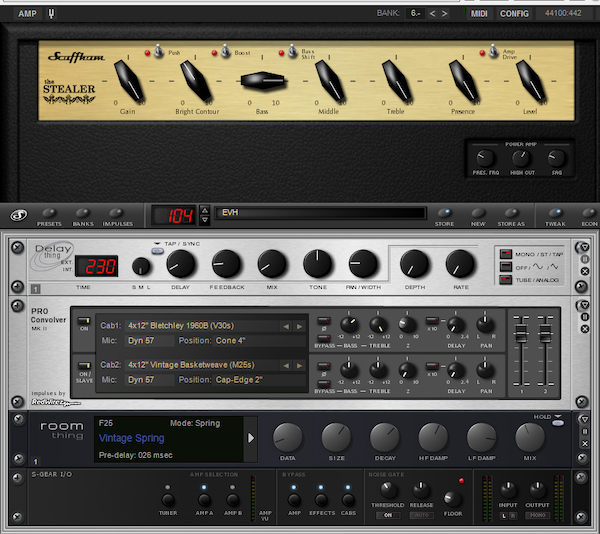 S-Gear is another high-quality suit of amp sims, effects, and speaker cabinets. Like many of the others, it can run as a standalone app or as a plugin in any DAW.

Waves and PRS teamed up to emulate three of their most valued amplifiers: the high-gain Archon, the Dallas, and the Blue Sierra. The SuperModels amp sim plugins also come with additional features not found in the real thing, such as a tone-shaper replicating an overdrive boost, a digital tuner, and an intelligent noise gate.

Ignite Amps‘s Emissary is a great free amp sim plugin for modern metal. It features two channels, the first of which can run clean to overdriven and crunchy, while the second is designed for blistering high-gain tones.

LePou Plugins have a handful of free amp models available, from classic Marshall Plexi, to Mesa Dual Rec, to ENGL, and more. There’s a flavor for everyone in this free set of standalone amp sims.

If you have Logic Pro X, the included Amp Designer is a brilliant sim in and of itself. It, too, includes different amp and effects emulations, and contains a wide variety of presets for getting to your desired tone with ease.

These are but a few of the best amp sims available today. If you’re looking for the most painless way to record electric guitar at home, then look no further!