It goes without saying that one of the most important first purchases for every guitar player is a tuner — that bears no further explanation! We’ve put together a list of some of the most popular options to help narrow your choice.

How Do Guitar Tuners Work?

Guitar tuners are a relatively simple device that reads an incoming signal and compares it to a reference pitch (A440 Hz being standard). The comparison tells you if your guitar is sharp or flat, and you can compensate accordingly.

What Are the Different Types of Guitar Tuners?

The three main types are chromatic, polyphonic, and strobe. Chromatic tuners assess the incoming pitch and compare it to the nearest note of the 12-pitch scale in Western music. These are also the most common; overall, they’re accurate and easy to use, with enough flexibility to let you experiment with different tunings since it accounts for all 12 notes. You can only tune one string at a time with a chromatic tuner.

Polyphonic tuners are another popular option, though somewhat less so than chromatic tuners. With a polyphonic tuner, you can strum all open strings simultaneously and it will read them all at once. This is especially handy for live performance where speed is important. At a glance, you can check all the strings and determine which ones need adjustment. The biggest complaint with polyphonic tuners is usually about the display which can be difficult to read.

Finally, we have strobe tuners. Strobe tuners are not only highly accurate, but they also let you set custom pitch references and temperaments. For example, instead of using 440 Hz as the reference, you could set it to 432 Hz and tune to that instead. This also means you can break away from Western standards, if that’s your thing. A guitarist’s first tuner typically isn’t a strobe, but pro players and professional guitar techs trust them the most. 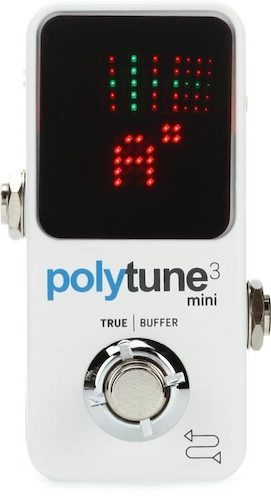 TC Electronic arguably popularized the modern polyphonic tuner as seen here with the PolyTune 3. This mini version of the pedal saves precious pedalboard space, cuts cost, and functions identically to the normal-sized version. One of the coolest features of this tuner is how it automatically switches between mono and poly tune modes based on the input signal. So, of course, you aren’t forced to always tune polyphonically. 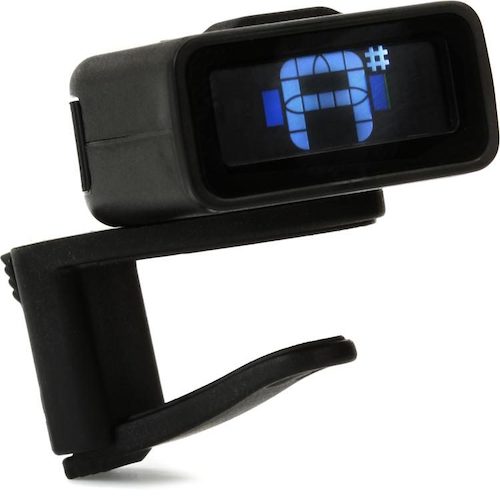 Headstock tuners have been all the rage for several years now, and we’ve seen virtually every guitar accessory manufacturer produce one. Clip-on tuners like the D’Addario NS Micro are more affordable than pedals, though they can be slightly less accurate since they’re measuring an acoustic signal versus a direct signal off the pickups. This chromatic tuner provides a reference calibration range of 410 to 480 Hz.

The Korg Pitchblack is another long-running favorite of guitarists the world over. It’s a 12-note equal temperament chromatic tuner with ±0.1 cent accuracy and a calibration range of 436 to 445 Hz. The Pitchblack is known for being indestructible, and it has a huge, bright LED display for easy legibility under any conditions. Currently, the Pitchblack Advance is making way for the new Pitchblack X, so you can probably score a good closeout or secondhand deal. 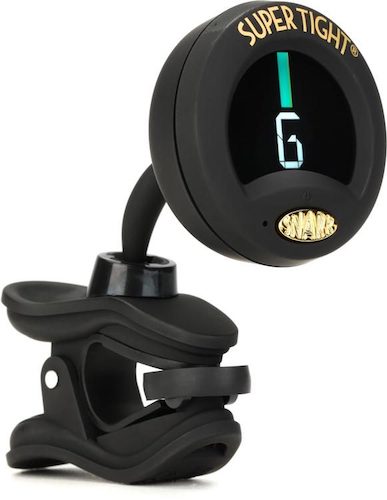 Snark is one of the best known clip-on tuners. Guitarists, bassists, and ukulele players can all take advantage of Snark’s clip-on accuracy. The ST-8 is also one of the most feature-rich headstock tuners, including flat tuning and transposition functions in addition to pitch calibration ranging from 415 to 466 Hz. The latest ST-8 has a lightning-fast chip for quicker and more accurate readings.

Touring guitarists and professional techs rely on the power of the mighty rackmount Pitchblack. In addition to the same accuracy you’d get from the pedal, the rackmount has dual front/back I/O and even a cable checker to assess whether a cable is working or not. Having I/O on the front and the back gives you more freedom to run cables neatly and integrate into a preexisting rig with no issues. Another great feature are the detachable rack adapters that can be converted to a floor/bench stand if you decide not to mount it or use it on a luthier’s bench.

We haven’t covered them yet, but the next frontier for guitar tuners is naturally in “app” form. GuitarTuna by Yousician is an impressive app marketed to beginners, including 100+ preset tunings displayed on an on-screen headstock, a metronome, and a whole library of learning resources — in addition to the chromatic tuner. GuitarTuna utilizes your device’s microphone to detect pitch. 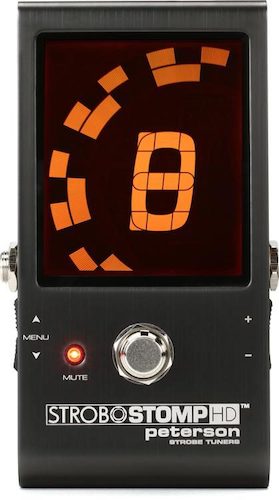 The StroboStomp by Peterson is one of the most advanced pedal tuners on the market. It boasts the largest display Peterson has ever built into a pedal with customizable LED backlighting to suit different lighting conditions. It supports up to 9-string guitars and 6-string basses and comes with a host of preset tunings. The StroboStomp also takes advantage of concert A calibration from 391 to 490 Hz.