iZotope launched VocalSynth in 2016. Right away, its features got a lot of attention. It was obviously a fresh approach to creative vocal production not previously seen in other plugins. Two years later, iZotope VocalSynth 2 came out, which is the most current version of the software.

The original VocalSynth came with a modular effects interface. It included ‘normal’ stuff like pitch correction, EQ, and compression, as well as weirder stuff like Polyvox, Compuvox, and Shred. The latest version still has pitch correction, a vocoder, and all sorts of proprietary weirdness.

iZotope is sort of known for developing plugins for specific purposes. They already have an all-in-one vocal production suite in Nectar, so VocalSynth 2 caters to a totally different set of needs.

Getting familiar with the layout, signal flows through three sections in VocalSynth 2. There’s a pitch section, a processing area, and a section for effects. You can, of course, bypass any of these sections independently.

The pitch correction itself is pretty advanced. If you’re familiar with Auto-Tune or similar software, you’ll find the ability to set the vocalist’s register, as well as the key and correction speed. As part of the pitch correction module, there’s a Voicing area where you can create artificial harmonies as well.

Next, there’s the processing section. This is where iZotope’s proprietary modules live, all of which make the plugin what it is. The five modules are Biovox, Vocoder, Compuvox, Talkbox, and Polyvox. At risk of being overly simplistic, they all have a vocoder-esque effect but are certainly unique from each other.

Each module then has its own synthesis section, which is fully customizable. This is what sets the second iteration apart from the first. iZotope VocalSynth 2 has room for much more detailed adjustments than the previous release.

Finally, we have the effects section, which includes 7 effects: Distort, Filter, Transform, Shred, Delay, Ring Mod, and Chorus. iZotope VocalSynth 2 then lets users rearrange the order of the modules; again, a welcome addition in the latest version of the software. 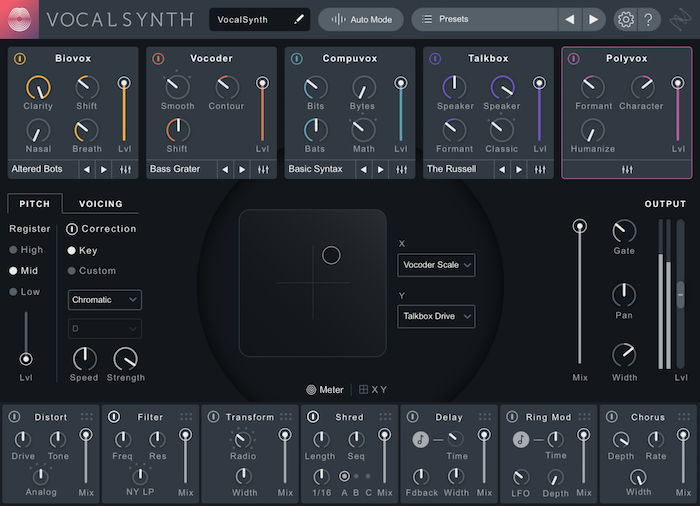 What sounds like a complex plugin is actually fairly easy to use. That’s definitely something that sets iZotope’s software apart from competitors, in that their plugins do a ton for the sound with only a short learning curve.

You’ll definitely want to get familiar with the three modes:

Next, you’ll want to understand the five unique modules:

Ultimately you’ll want to dive in and get your hands dirty with this plugin. While its features can be described, they’re best heard.

iZotope VocalSynth 2 is an understandably polarizing plugin. What makes it so cool is exactly what will deter others. It’s a pretty niche tool for creating unique, outlandish vocal sounds.

Obviously it won’t be suitable for all styles of music, but if you lean towards electronic music production or just like to include lots of creative sounds in your productions, iZotope VocalSynth 2 is a welcome addition to any plugin collection!