Guitarists have a lot of options when it comes to effects pedals. After the basics like overdrive, distortion, and reverb/delay, comes modulation. Flanger pedals are a type of modulation effect that leave a pretty profound mark on your tone. If you’re curious as to what flanger actually is and which pedals are some of the best, read further!

What Is a Flanger Pedal & How Is the Sound Created?

Flanging creates a distinct effect that sounds like whooshing or swirling. It almost sounds like you’re sweeping an EQ across the frequency spectrum of your signal. These kinds of pedals take the incoming signal and duplicate it, delaying it by a short amount of time — usually 20 ms or less. It then varies the delay in a constant cycle, mixing it back in with the original signal.

The result of the added delayed signal creates comb filtering, which in turn sounds you’re sweeping an EQ. Flanging can be subtle or extreme based on how you set the effect. In the analog tape days, engineers would sync up a pair of tape machines and press down one of the machine’s reels. This would cause them to go slightly out of sync (delay), and you’d get the flanging effect once the other machine gradually caught up. Pedals are a lot easier!

How Is Flanger Different Than a Phaser?

This is a great question, because the principle of both is similar — as is the sound itself. The main difference is that a phaser doesn’t delay the signal. It instead uses filters that notch out frequencies on the duplicate to create a phase shift with comb filtering.

Phasers usually have a more clearly delineated pattern to their sweeping motion, and the effect is generally described as subtler than a flanger.

The 10 Best Flanger Pedals For Any Budget 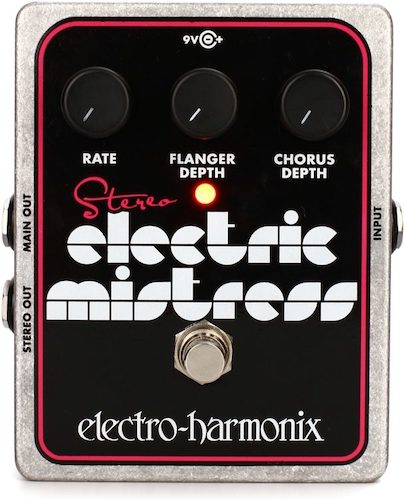 The E-H Electric Mistress is a combo modulation pedal with outlandish possibilities. It allows you to combine both flanger and chorus, or run one of the other based on your chosen settings. The only other control is rate, which dictates the overall speed of the modulation. It’s a classic reborn. 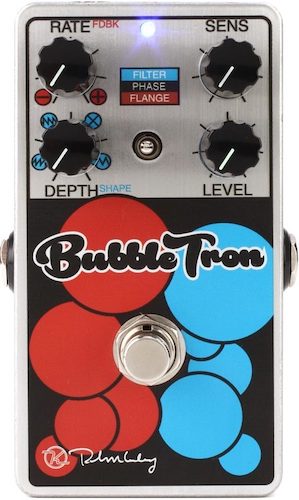 Robert Keeley, like many guitarists, is a Zappa fan. The Bubble Tron is a flanger/phaser inspired by the heavily modulated sounds that made Frank Zappa such a distinctive voice in the world of guitar and music as a whole. The coolest thing about this pedal is that it responds dynamically to your pick attack and only cycles when you actually play. It opens a new world of flanging possibilities. 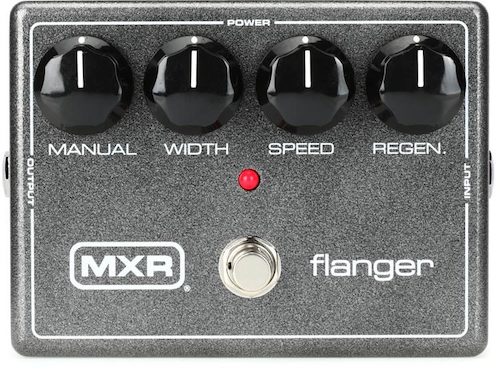 The MXR M117R is remarkably versatile for such a simple pedal. Despite having only four controls, their interaction with each other leads to virtually endless flanging manipulation. You can achieve classic sounds like those of Eddie Van Halen, or come up with something totally unique to your playing style and genre. 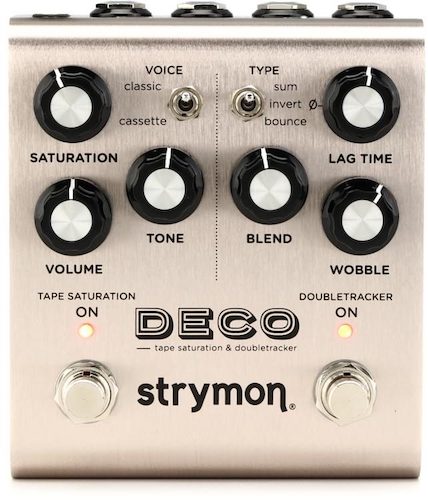 Anyone familiar with the Strymon stuff knows just how incredible it is. The Deco is actually a tape machine emulator in pedal format. And if you remember how engineers did flanging back in the old days, you can imagine what this pedal is capable of. Not only can you achieve flanging with the Deco, but also chorusing, delay, and saturation. 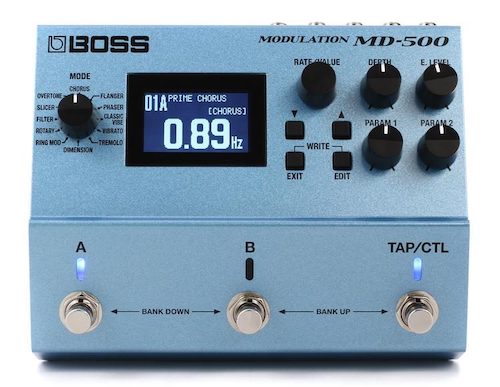 The Boss MD-500 is a 12-mode modulation machine. It includes flanging, of course, but also chorus, slicing, phasing, filtering, and a whole lot more. This is one of those pedals that makes a fantastic studio companion and not just a pedalboard mainstay. The tonal possibilities are nearly endless, and you may find yourself wanting to use it to print mix effects in addition to using it as a guitar pedal. 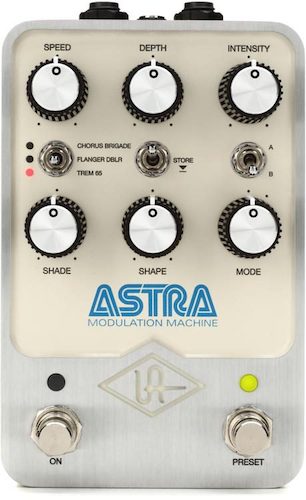 It wasn’t too long ago that UA announced their series of effects pedals. One of those is the Astra Modulation Machine: a three-in-one pedal containing analog emulations based on UAD’s lauded DSP-powered plugins. Inside are a bucket brigade chorus, a flanger/doubler, and vintage amplifier tremolo. Plus, if you register the product, UA gives you access to two additional effects modes for the pedal, loadable via USB — a Phase 90 and Dharma Trem 61. 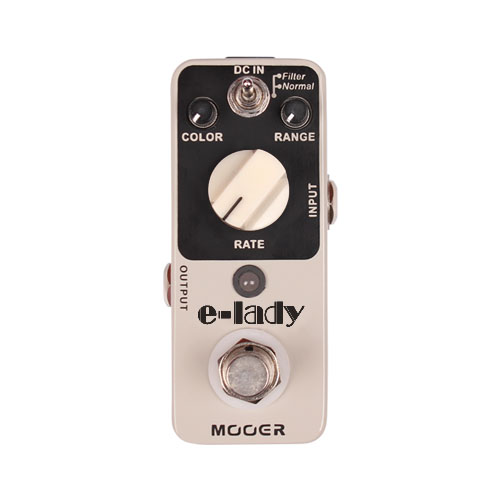 Some of us would prefer not to shell out hundreds of dollars for an effect we may not use all that much. Luckily there are awesome budget-friendly options out there, like the E-Lady by Mooer. This is a classic analog flanger with a filter mode and oscillator effects. The controls are dead simple, the sound is spot-on, and it’s even a mini pedal to save board space. 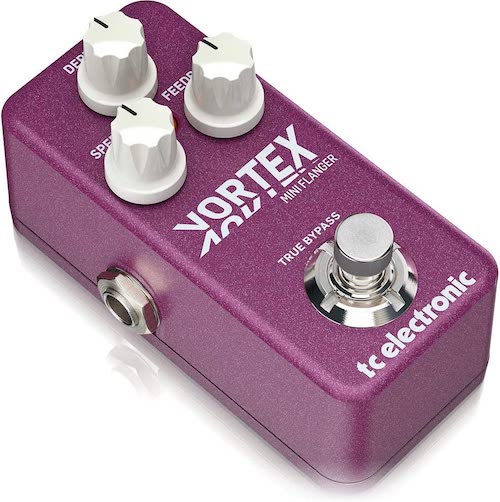 The Vortex Mini is TC Electronic’s mini entry into the world of ’60s flange. Containing TonePrint technology, users can create their own custom flanging tones through the free TonePrint App and send it to the pedal. There’s plenty of room for experimentation there, even with a mini pedal with simple controls. 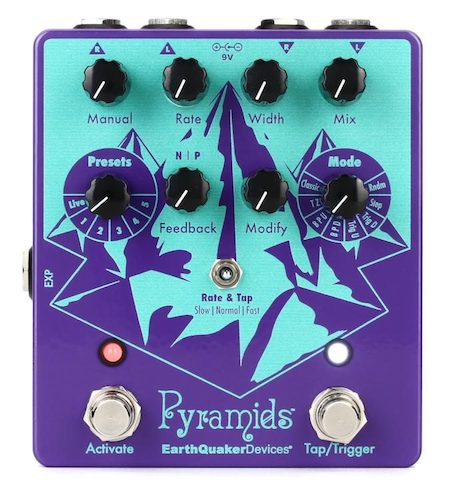 EarthQuaker’s Pyramids Stereo flanger may be one of the most in-depth flanging pedals on the market. It offers eight individual modes and the ability to save five user presets — it even has a tap-tempo feature to lock into the song’s BPM for on-beat swirling. The mix control is an important addition that lets you season your tone with just the right amount of modulation. 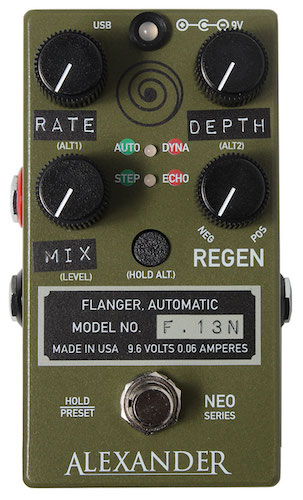 As part of Alexander’s Neo series, each pedal, including the F-13, incorporates a 32-bit microcontroller with presets, expression, and MIDI compatibility. This makes the F-13 extremely playable and musical, particularly with an expression pedal connected. Considering all of the features this thing has, it’s actually a bargain, even if the learning curve is steeper than others.