Output Exhale has been out for some time now, but it’s no less relevant than it was at release. Catering to today’s modern producers who want heavily stylized vocals in their productions, Exhale is a virtual instrument full of rich vocal sounds.

Output describes Exhale as the ‘first truly modern vocal engine.’ That’s pretty vague…based on the description alone, it sounds more like a vocal processing suite for mixing than a VST. Rest assured, it is a virtual instrument library for Kontakt catering primarily to hip-hop/pop/R&B/EDM producers. Try to picture ‘vocals’ in the most abstract sense, and you’ll have a better idea of what Exhale sounds like. It’s essentially a synthesizer built on recorded vocal sounds.

When you open it for the first time, you’ll discover that Exhale divides samples and sounds into Notes, Loops and Slices, but you get access to each category through one Kontakt instance. There are over 500 presets loaded into the instrument, all of which fall into one of those three main categories.

Output Exhale includes 12 filter buttons—Dirty, Light, One Shot, Percussive, Electro, Creative, Pure, Heavy, Atmos, Looped, Complex, and User—which can be used in any combination to sift through the 500 built-in presets.

After loading a preset you can use the four main sliders to mess with the sound and tweak it to your liking. For further refinement, the Engine section of the plugin is where you want to go. 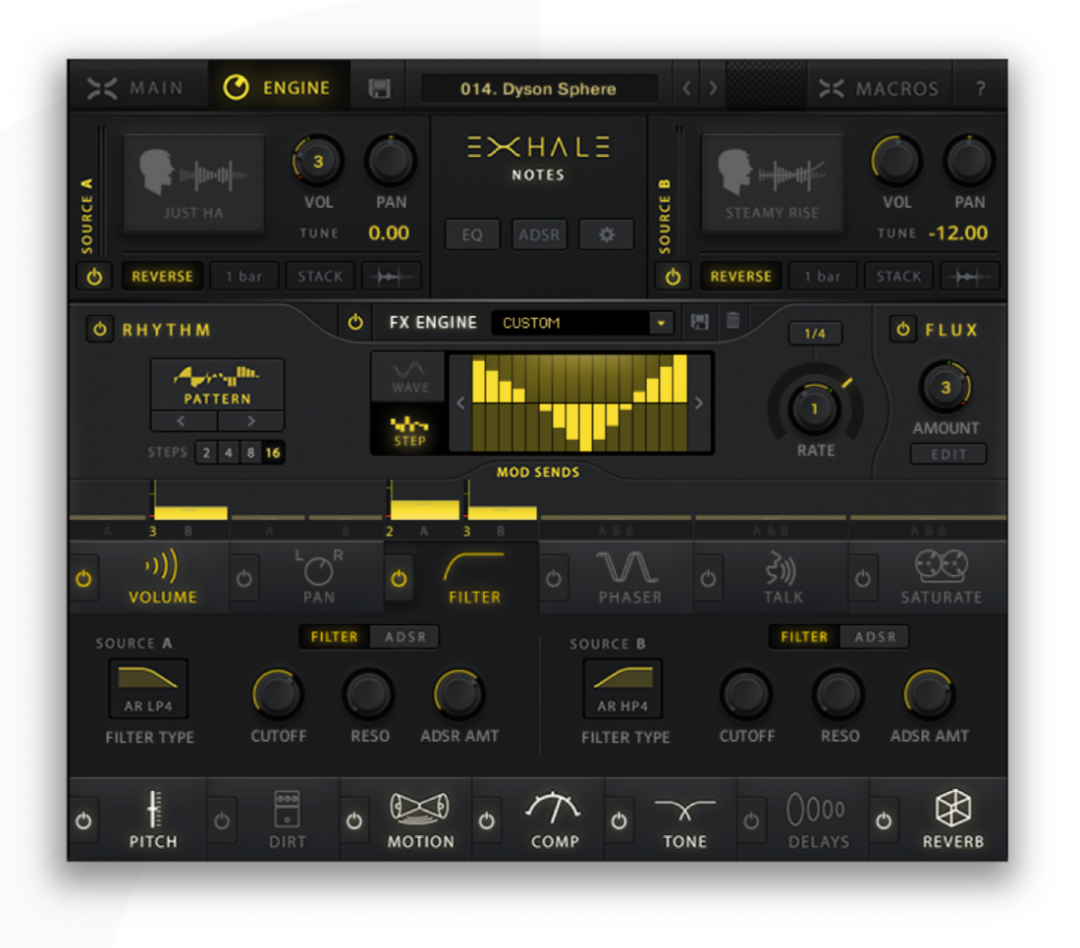 From there you’ll see a section called Sources, which is where the two samples that combine to make a patch are selected. ‘Sources’ are sent through their own channel of multi-effects including tune, pan, EQ, envelope, pitch, and reverse. Below Source is the Rhythm panel with the ability to modulate things like volume, pan, filter, and Exhale effects Talk, Saturate, and Phaser.

At the end of the signal path you’ll find insert effects, including Pitch, Dirt, Comp, Tone, Delays, Reverb, and a chorus-y effect called Output calls Motion. There’s plenty of customization, so consider each preset a starting point that you can alter pretty much endlessly.

And that’s what you get with Exhale: a one-of-a-kind instrument built by vocals, that sounds only vaguely reminiscent of them. The fact that the initial sound source is organic is what sets it apart from synthesizers that are purely, well, synthetic.

Exhale is definitely more of a synthesizer/virtual instrument than a vocal sample library. Even at its most basic, you have a ton of pre-processed vocal samples for piecing a composition together. Of course, if you want to really dive into the deep end, there’s plenty of onboard effects for tweaking, experimenting, and experimenting some more.