PreSonus FaderPort: Does Your DAW Need One?

The PreSonus FaderPort gives users tactile control over features in their DAW. With transport buttons and a single fader, it’s main use is for writing automation in a hands-on way.

Control surfaces like these bridge some of the gaps between classic analog mixing and modern keyboard-and-mouse functionality.

About the PreSonus FaderPort

The commercial studio experience is totally different than working in-the-box at home. Namely, using a DAW for everything is not at all similar to using a large-format console. The FaderPort attempts to minimize some of the physical disconnect in-the-box mixing introduces. With this, any DAW user can have a single fader, a pan knob, and transport controls.

The FaderPort automatically works with any channel you have selected in the DAW. This gives users some of the same experience you’d have working on a traditional analog console. Plus, the fader itself is motorized, which means it will move to match itself to the same level set in your DAW.

The PreSonus FaderPort is primarily intended for writing pan or volume automation in real time. A huge part of the analog mixing experience is doing fader rides — sometimes with the help of multiple people to automate levels across numerous channels. We’ve lost a lot of that ‘touch’ mixing in-the-box; you can still ride faders, but they’re digital and you’re controlling them with a mouse.

FaderPort restores some of the magic of writing automation using a tactile surface. Additionally, it has transport functions so you can start and stop playback, as well as arm tracks for recording and more, all within a neatly designed controller.

It isn’t intended to replace your keyboard and mouse setup, but augment its functionality with some workflow improvements. 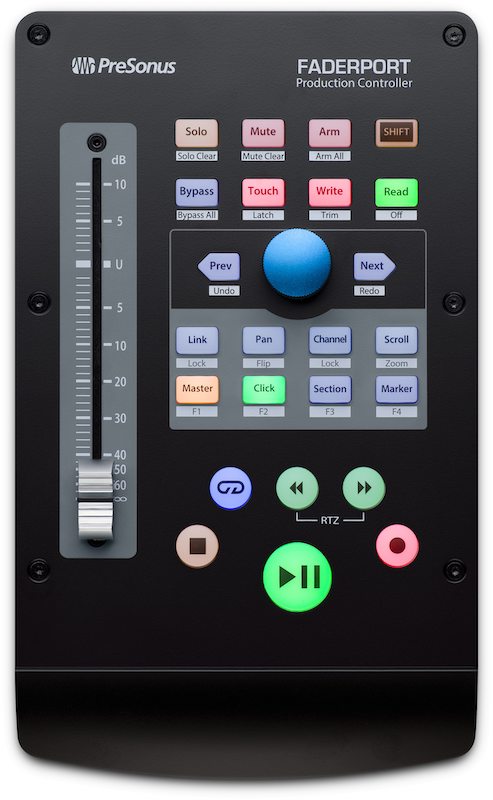 Keyboard and mouse are standard DAW-control devices; however, they can be more effective when used in tandem with the PreSonus FaderPort’s tactile control over mix and automation functions.

A useful addition to any in-the-box workflow, the FaderPort has a 100 mm motorized fader for writing fades and automation in real-time. It also comes with 24 buttons covering 40 different DAW functions, all in a desktop-friendly chassis.

Finally, you can even quickly zoom in on audio files for editing and control track levels/panning with the touch of a finger. It intends to make in-the-box workflow faster and more efficient with strictly utilitarian features.

The FaderPort in Practice

On paper, the PreSonus FaderPort sounds awesome! But one thing that immediately strikes me as unnecessary are the transport and ‘Session Navigator’ controls.

We can fly through those functions using the keyboard shortcuts built into the software. Having external physical control over that functionality seems like a hindrance. Why would I take my hand off the keyboard when I can achieve the same thing with it? This just slows everything down.

However, the biggest advantage the PreSonus FaderPort has is the ability to write in automation with the motorized fader. A DAW is just sterile software, and particularly for automation, physical control literally adds back that creative human touch.

Even though writing in automation is and done all the time, the results aren’t as ‘musical’ as riding a physical fader in real time. That goes for both exclusively drawn-in automation and real-time digital fader rides, and it’s because a mouse has nowhere near the same feel as an actual console fader. It’s hard to be precise, so you end up being too heavy-handed or way too subtle.

The FaderPort remedies all of that. It’s easier to write automation that sounds more natural and more musical when you have an actual fader to work with.

Next, the footswitch function is great if you’re engineering yourself. You can keep your hands on your instrument and use the footswith to start and stop recording — very cool for keeping the workflow efficient and staying in a creative headspace.

To sum it all up, the FaderPort is perhaps best used as an automation tool. That isn’t to say some users won’t find the Session Navigator features useful, but that it’s most efficiently done with DAW keyboard shortcuts.

It’s hard to beat using an actual fader for more musical and ‘human’ automation, and the PreSonus FaderPort excels at it.