“Ed Van Halen is going to change a lot of lives around the world in the next 12 months” – Kim Fowly predicted in Phonograph Record in 1977. Van Halen had only recently been signed to Warner at the time of Fowly’s review, and the Los Angeles band hadn’t yet released their landmark debut album. But they had created a tremendous following in the Los Angeles area with a massive heavy metal sound emerging from a small three piece band (David Lee Roth fronted the group as a consummate showman, but left the instrumental part to Eddie on guitar, Eddie’s brother Alex on drums and Michael Anthony on bass). By the time the band released their eponymous first album in February of 1978, Van Halen was poised for almost-certain commercial success. But nothing could have prepared audiences for the album’s completely instrumental second track, “Eruption,” in which Eddie groundbreaking guitar playing was showcased, full-force, for the world to see. Ozzy Osbourne’s guitarist, Zakk Wyld recalls: “It was beyond mind blowing. I’m going, ‘That can’t be a guitar. What is that?” Phast Phreddie Patterson wrote for Waxpaper in 1978: “Boyishly grinning Edward wails his guitar like his life depended on it…like a kid with a new toy, he tries to get as many noises out of his instrument as electronically possible. The results are unbelievable.” With his unconventional technique and distinct guitar tone, Eddie Van Halen revolutionized the guitar landscape for generations to come.

Edward Van Halen was born in Amsterdam in 1955; his father was a Dutch clarinetist, saxophonist and pianist, and both Eddie and his brother Alex began learning piano at an early age. In 1962 the family immigrated to the US, settling in Pasadena, CA. The guitarist explained: “My mom wanted us in the U.S. and out of Holland. She was afraid we’d get into music like my father.” For all the irony in that statement, music was certainly important to the family; among the few belongings they brought with them to the United States was the family piano, which the boys played for passengers on the boat to help finance their journey. Further, finding a classical piano teacher once they settled in CA was one of their parents’ earliest priorities.. Despite these lessons, Eddie’s musicianship skills centered around his ear and not literacy: “I never learned how to read…I always fooled the teacher. He’d play the song for me first and I’d watch his fingers and learn the song by ear.” Young Eddie would even win local piano contests held at Long Beach City College, but his interest in the instrument was waning.
“I wasn’t into rock in Holland at all because there really wasn’t much of a scene going on there. When we came to the U.S., I heard Jimi Hendrix and Cream and I said, ‘Forget the piano, I don’t want to sit down. I want to stand up and be crazy.” At first, Eddie began focusing on drums while his brother Alex played guitar, but the boys quickly switched instruments. Recognizing their talent, their father even began relying on the boys’ talents to play along with his own gigs around the L.A. area.

As a young 13 year old, Eddie began teaching himself, note-for-note, the guitar parts to the biggest rock hits of the late sixties – songs by Cream, the Beatles, the Rolling Stones, the Yardbirds (especially Jimmy Page and Jeff Beck) and Jimi Hendrix. A few years later, he and his brother began forming their bands, while developing their own individual skills. According to Eddie, in an interview with Rolling Stone, a Led Zeppelin concert at the Forum on August 21, 1971 was the start of the guitarist’s signature double-tapping technique:

“I was watching Jimmy Page going [sings hammering guitar lick], like that, with one hand in ‘Hearbreaker.’ I thought, ‘I can play like that, and you wouldn’t know if I was using this finger [points to left hand] or this one’ [points to right hand]. But you just kind of move it around, and it’s like, ‘You got one big hand there, buddy. That’s a hell of a spread!’”

While Eddie wasn’t the first person to invent the move, he was the first one to really put it in the public’s ear.

Eddie’s guitar tone is another stand-out element of the guitarist’s signature sound. Although his first guitar was the flamenco guitar his parents had bought his brother, Eddie quickly wanted an electric instrument and found a $100 Teisco ET-440 at Sears. 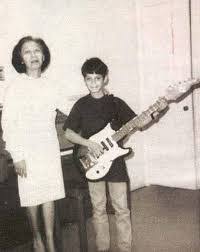 As he got older, however, Eddie became frustrated with the options available to him in his relentless pursuit of the perfect guitar tone. He began exploring how to put together his own instrument. Although he has created many custom guitars in the course of his career, the most famous of these is the original “Frankenstrat,” as it is now commonly called. The guitar was a mix of a strat-styled stock body with Gibson pickups and various other Fender parts, and represents his attempt to bring together the qualities of both the Gibson and Fender guitars. He explained: “crossing a Gibson with a Fender was out of necessity, because there was no guitar on the market that did what I wanted.”

He ran this composite guitar through a modified Marshall amplifier, overdriven to create the sonic signature for which he is so well known. In coupling his signature guitar tone with his revolutionary playing technique, Eddie Van Halen was able to create a sound unlike anyone before him.

It is undeniable that Eddie’s guitar tone and technique are, in themselves, recognizable in any context; when the guitarist was brought in to play for Michael Jackson’s hit song “Beat It,” his solo is instantly identifiable as Eddie Van Halen. But Eddie further distinguishes himself through his songwriting.

As the only guitarist in Van Halen, Eddie spent the band’s early days developing a way to provide both the harmonic foundation and lead guitar parts through his one instrument. Reflecting on the recording of the band’s first album, the guitarist explained: “I remember feeling very uncomfortable with separating my lead and fill parts from my rhythm parts. Onstage, I’d gotten used to doing both simultaneously. I’d just noodle in between chord lines.” With the band’s original material, Eddie’s talent for creating expansive and virtuosic guitar parts is integrated inextricably into the songs. Further, while the guitar is certainly his showpiece instrument, he never forgot the musicianship training of his youth. In 1984, he turned to his keyboard roots, co-writing the #1 hit “Jump” which placed Eddie front and center with his unforgettable synthesizer riff and solo (the song also features a succinct but masterful guitar solo). Eddie’s talent and musicianship has been a clear line through all of the band’s music and through their massive success across the decades. Whether the band was fronted by David Lee Roth or Sammy Hagar, Van Halen’s success has relied heavily on the band’s unparalleled master of the guitar. 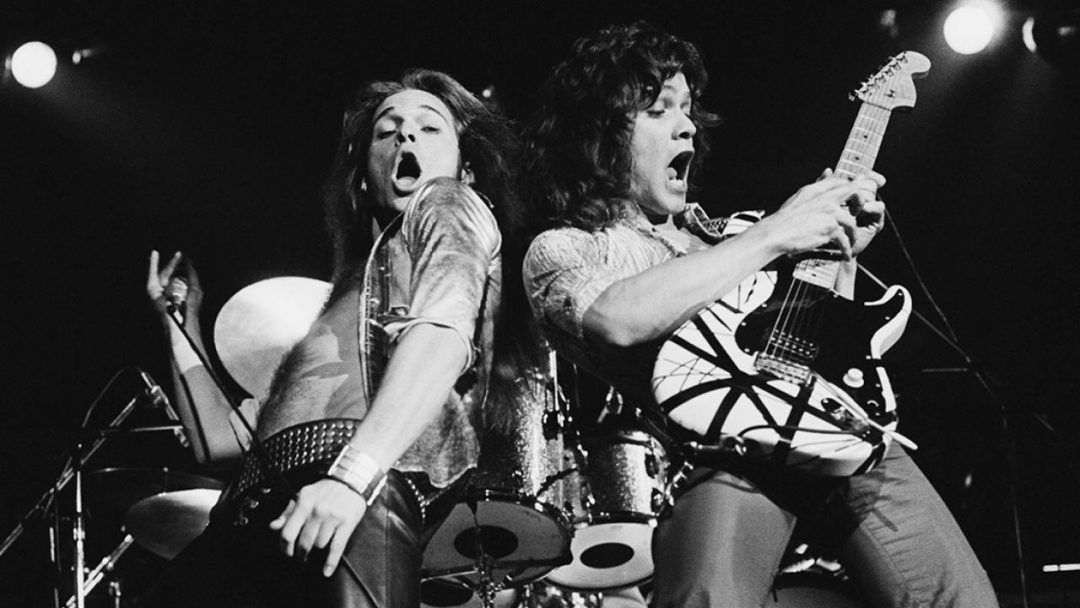 Van Halen has continued to be a powerhouse of musical talent and a sonic tour de force since they burst onto the scene in 1978. The band has sold more than 80 million albums, has had 13 number one hits, and in 2007, the band was inducted into the Rock and Roll Hall of Fame. At the ceremony, Slash appropriately declared Eddie a “guitar genius, innovator” and a “god to fans and musicians alike.” In 2012, Guitar World’s readers poll for “The Greatest 100 Guitarist of All Time” voted him number one. Generations of musicians have been influenced by his playing and inspired by his dedication to his instrument. Passion for music and love for the guitar has driven each step of his career. In the guitarist’s first public interview, back in 1978, Eddie explained this commitment:
“I know a lot of people who really want to be famous or whatever, but they don’t really practice the guitar. They think all you do is grow your hair long and look freaky and jump around, and they neglect the musical end. It is tough to learn music; it’s like having to go to school to be a lawyer. But you have to enjoy it. If you don’t enjoy it, forget it.”

Combining innovative technique with his signature guitar tone and great songwriting, Eddie Van Halen revolutionized the world of guitar-driven music and challenged perceptions of what the instrument could do and sound like.