Choosing the Sample Rate for Your Project

Sample rate is one of the first things you’ll be asked to choose when you open a new session in your DAW. Alongside bit depth, it can have an impact on the fidelity of your audio recordings.

What is sample rate?

Digital audio is the overall system we use to record, edit, mix, and master sounds. A microphone, audio interface, and laptop is considered a complete digital recording setup.

And since we’re not printing to tape, we need a way to convert an analog sound wave into binary data. Interfaces contain analog-to-digital converters which turn sound information like frequency and amplitude into data the computer can store and read.

Finally, this is where sample rate comes in. Analog information gets converted through periodic ‘snapshot’ measurements called samples. The digital system takes these snapshots at a speed determined by the sample rate.

From there, it can go all the way up to 192,000 samples per second to capture supersonic frequencies and detail far beyond human hearing. File size gets bigger the higher you go, so using a super high sample rate is only worth it if you’re doing some heavy time-stretching and crazy audio manipulation. 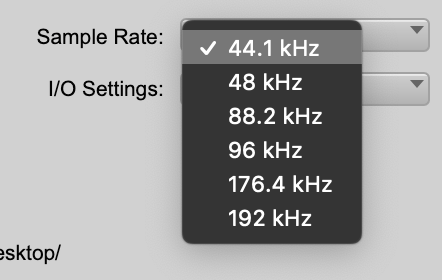 Depending on the interface/system you have, you’ll see different options. The following are the most common rates you’ll see:

Why is it measured in kHz?

Sample rate directly corresponds to the highest frequency a digital system can record. The Nyquist Theorem states that the sample rate must be twice as high as the frequency you want to record.

Any analog signal above the Nyquist frequency will not be captured correctly by converters. Instead, the system will create artificial frequencies in a process called aliasing. This happens as a result of a low-pass filter not doing it’s job.

Aliasing will either sound like silence, or it will reproduce the audio an octave lower. Early filters in digital systems weren’t always as precise as the ones we have now.

Can anyone really hear the difference?

Super experienced engineers might be able to hear the differences between sample rates. But the truth is, digital audio technology gets better and better every year. As such, it gets harder and harder to tell the difference in sound quality!

Hypothetically, it’s not wrong to want to record at the highest possible quality level. You’ll need excess hard drive space, though, and your audio interface may not support something like 192 kHz depending on what you have.

And realistically, even if you record at 88.2 kHz the whole time, the final master will likely get bounced down to 44.1 or 48 kHz. Most people will choose either 44.1 or 48 and work there the entire time.

Finally, if you play audio files recorded at a different sample rate than the current system, it’ll sound weird! For example, listening back to 44.1 files in a 48 session sounds sped up and higher pitched. This is because the system is reading the samples faster than 44,100 times a second. The opposite effect occurs with audio playing back at a slower sample rate than it was originally recorded.

This is why your DAW will automatically up- or down-sample files upon import.

Digital technology has done everything it can to retain the original fidelity of an analog signal. Even though early filters didn’t always do a great job of mopping up frequencies above the Nyquist frequency, today’s tech is markedly better.

Working at 48 kHz will cover you for pretty much all purposes, and even 44.1 is a perfectly acceptable place to record.