The Oxford Limiter often pops up in conversations regarding the best limiting plugins. It has a few unique features that set it apart from others, but it’s the promised “night and day” difference that intrigues most users. With seemingly endless choices of limiting, we’ll break down what makes the Sonnox Oxford such a popular choice.

Most of the competition in the limiting plugin category promises increased loudness, transparency, and presence. It’s hard to do, because limiting can oftentimes introduce hard clipping which squashes a mix and sucks the life out of it. Transients disappear, audible pumping occurs, and at worst, distortion.

It’s easy to see why many engineers gravitate towards the Oxford Limiter by Sonnox. Its pleasant blue GUI is laid out in three easy-to-navigate sections: Input, Pre-Process, and Output. At the Input stage you can control the amount of input gain being sent to Oxford, as well as adjust the threshold. In the Pre-Process module you’ll find attack, release, and soft-knee parameters, as well as a handy auto-gain button for gain reduction. Finally, the Output stage includes this limiter’s most unique feature—an Enhance control.

Enhance is a crucial part of the Oxford design. The limiter is a high-quality offering without it, but this control lets the plugin really shine. Enhances increases perceived loudness by further shaping the dynamic content of a mix. It also adds subtle harmonic saturation, and more sample limiting. Go easy with this control to start, because it can add aggressive distortion if you’re not super careful.

Oxford Limiter is definitely one of those must-try plugins. Great limiters can be tough to come by; many of them do their job but leave something to be desired. A quality true peak limiter like this, with novel controls like Enhance, Auto Comp (which detects and corrects D/A reconstruction errors), and even dither, Oxford Limiter is fantastic for mixing, with plenty of detail for mastering as well.

How to Use Oxford Limiter

Oxford Limiter is suitable for any source, group, or bus, but is most at home on mix buses or on tracks for mastering. By default, the threshold (ceiling) sits at 0dBFS. It’s possible to drive the input gain an additional +18dB to go past the threshold and introduce dynamic gain reduction.

As a general starting point for attack, slower times will yield the kindest results to the overall program material. Faster attack times will remove extremely fine detail, but are good for loudness maximization. The best way to use slower attack times without needing to reduce the output level control significantly is in Safe Mode, or with the Enhance control at, or above, 100%. Either of these tricks will soft clip transients for a pleasant, natural sounding limiting.

The release settings provide a wide range of times, with faster settings typically catering themselves to overall loudness maximization. Generally speaking, auto-gain is good to have enabled at all times for its ability to compensate for large level differences.

Sonnox Oxford Limiter is a highly flexible plugin, but for maximum loudness, you can try these settings to start:

All of these parameters can be subtly adjusted for the given material and still retain maximum loudness. 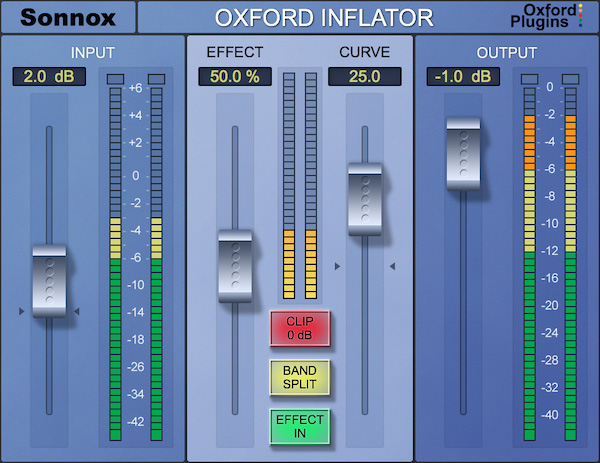 At first glance, both the Inflator and Oxford Limiter promise uncompromising loudness. That’s where their similarities end, though. The Inflator is not a limiter and operates on a completely different principle. It doesn’t compress or affect transients or dynamic range in any sense like Oxford Limiter does. Instead, Inflator is a static distortion generator that enhances the harmonic content in a way we associate with loud sounds. Inflator simply increase the perceived loudness by modifying harmonic content.

On the other hand, Oxford Limiter is a traditional true peak limiting tool in the sense that it compresses, controls and alters transients, and limits the overall output.